Before I went down to get changed for my quarterfinal soccer game I saw that the score was 2-0. It was a weird feeling when I realized that the Leafs had two goals. Over the course of the season the Leafs have fallen behind 2-0 approximately 48 times. Have they even played 48 games? Of course not. That's hyperbole designed to point out that the Leafs hate first periods. They're these cats: 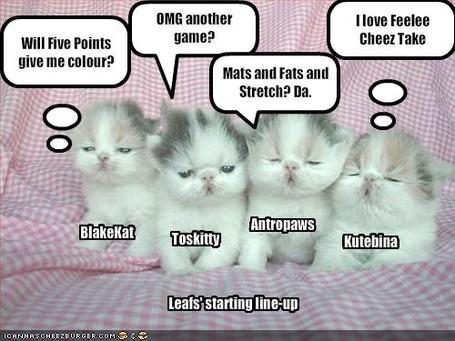 Tonight they did not do the dozy kitty act. Instead, they saved their nap for when the score hit 4-0. After watching my team throw away a spot in the semis because of dozy defending I came out and saw that the score was 4-3. As I got into my car, the Canes tied the score at 4-4. I waited to hear how the game had gone and heard Jim Ralph say that the Leafs had now blown a 4-0 lead. At this point, if the Leafs had lost and I had to watch Paul Maurice's stupid press conference I would have deleted the blog. Thankfully, Cam Ward did his best Toskala impression and saved us from a Grabovski-like hissy fit.

Now, I am re-watching/watching the third period as I type this and I see that Ron Wilson called a timeout after the second goal. What did the second goal look like? Well, Idiot Maguire would have you believe that it was a 'hard' play. He said that about four times in a minute. The only thing hard about the play was Maguire's commentary. Ruutu pulled a Jason Blake and, rather than actually drive the net, decided to stop and just fire a useless shot at the net. Good thing for him Toskala remembered his secret orders from Uncle Cliff and let the shot go in shortside.

Of course, the roller coaster was just heading up towards the big drop. The Hurricanes potted a third and then the miraculous happened. I don't know if Paul Maurice did this as a huge Fuck You to Leaf fans everywhere and MF37 in particular but he called a fucking timeout! WHAT THE HELL!?!?! The man that waited until the Sabres had shell-shocked his team into a quivering mess to call a timeout called a timeout while his team was blitzing the Leafs into submission!

After a fourth goal that was characterised by Toskala's continued inability to hold onto a rebound the Leafs looked sunk and Carolina fans were thinking back to Poni's braincramp. In stepped Cam Ward, one of the most overrated goalies in the NHL, who could think of nothing worse than having been a part of the demise of Pension Plan Puppets. Cam Ward, we salute you!

Wait, did I forget to mention something? I feel like I missed something huge...Oh yeah, Jason Blake, the albino assassin, picked up FIVE POINTS! ONE-TWO, ONE-TWO-THREE, ONE-TWO-THREE-FOUR, FIVE POINTS! That included a freaking hat trick. That means that Jason "deadweight" Blake put up 1/6 of his production so far this year in one game. I think Pierre "MONSTER!!!" Maguire was onto something: Jason Blake fucking hates Paul "Space Cowboy" Maurice's guts.

So the roller coaster ends with Tomas Kaberle increasing his trade value and the Leafs sticking it to their former bench boss. Tomorrow night they take on the Thrashers before being dormant on a second Saturday night. Enjoy the lost ad revenue CBC!