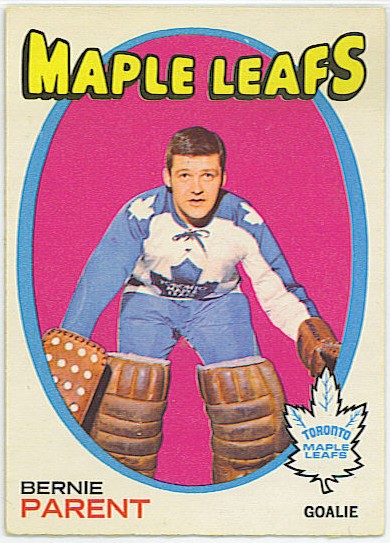 Most times, the LotD is someone I can at least vaguely relate to something going on at the moment, be it tonight's opponent or something else in the news.

This is not one of those cases.

I did, however, learn about a funny story for Bernie Parent and have been waiting for a chance to tell it.

For his one WHA season, Bernie wore the number 00 for the Philadelphia Blazers. 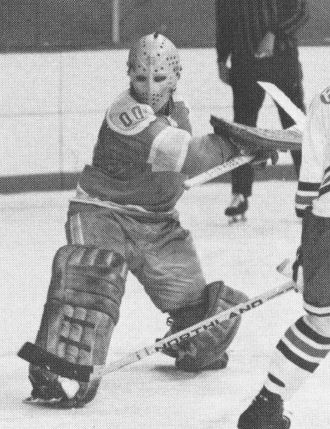 When asked why he chose this, he said "Every time a puck goes in, I look behind me and say, 'Oh oh.'"

Well, I thought it was funny, anyway.

Bernie might not be Exhibit A in the case for Harold Ballard being the worst owner in history (Leaf history, anyway) as both Keon and Sittler were probably worse cases.  I can see him as exhibit C, though.

The Leafs picked up Bernie in the middle of 1970-71 as part of a three-way deal with Boston and Philly.  Boston ended up with Mike Walton, Philly with Bruce Gamble and a kid named Macleish and Toronto got Bernie.

Bernie had been regarded as one of the up-and-comers in the league for a while.  In Toronto, he studied under Jacques Plante and really firmed up his game.  The Leafs should have been set in net for the next ten years.

Then came the WHA.

Bernie suddenly had the opportunity to make $750K over 5 years in the WHA.  Harold had the opportunity to match, but instead he simply advised Bernie to get his money up front (this was actually rather good advice on Harold's part) and then he let Parent walk (along with an entire forward line and three defensemen, and eventually Keon, Henderson and Ullman as well, but that's a story for another day).

For '72-73, the Leafs had Plante, getting older by the second, and a not-ready-for-prime-time Ron Low.  They traded Parent's rights back to Philly for Doug Favell and a first, and then began a goaltending carousel that didn't end until Mike Palmateer came to town.  Parent for his part, did OK back in Philly.

Now, the Leafs from '70-72 weren't the Flyers of '73-75, and Parent's numbers show this.  His most memorable Leaf moment came in the 1971 playoffs against New York and it's an odd one.  In the middle of a line brawl, Vic Hadfield (now owner of a driving range in Mississauga/Oakville) grabbed Bernie's mask and pitched it into the MSG crowd.  When asked for it to be returned, the fans were surprisingly uncooperative.  Imagine....

(Note: the mask throwing has to be at about the 1:40 mark, just as the camera pulls away.  Right before that you see Giacomin and Parent wrestling and both have masks.  Hadfield comes in, and by the 2:00 mark Parent is maskless.  Too bad they miss it.)

the HHOF take on Bernie:

In the early part of his career, Parent tended goal with the Boston Bruins and the Toronto Maple Leafs, but he was best known for being the clutch netminder on the Philadelphia Flyers' championship teams.

Parent was a stand-up goalie, a technique he learned from his boyhood hero, Jacques Plante. Many years later, when the slumping Parent talked about retiring, Plante talked him out of it. In addition, Plante coached Parent on some fundamental points that Bernie had been missing in his game. Plante watched him practise in Philly for two days and didn't say anything. Then he told Parent exactly what he was doing wrong - sitting back on his heels, backing into his crease and losing concentration.

Parent admitted he had considerable fear of playing goal in the NHL, and that fear helped him play better. On game nights, he never appeared without his mask on, even going to and from the dressing room. He also had a strict pre-game ritual. He sat alone under a miniature Stanley Cup and thought about the opposing players he would face, then slept for eight hours, had a steak for lunch and then slept again.

Parent grew up in Montreal in the early 1950s and played pickup games on the street with a tennis ball. Somewhat of a loner as a kid, he liked playing goal. Remarkably, Parent didn't learn to skate until he was 11. In his first game as a kid, he sheepishly admitted he let in 20 goals, not a great start for someone aiming for the pros. But he had the dedication.

By 1965 Parent had moved his way up to the Bruins' farm system. Boston brought him up to the NHL, where he played badly in his first two seasons, letting in an average of 3.67 goals per game. In 1967 Parent was claimed by the Flyers in the Intra-League Draft. It was there that he started to establish his reputation as a top goalie. But in 1971 Parent was traded to Toronto in a very controversial deal. The Flyers had another young goalie, Doug Favell, and thought that Bernie would be better trade bait. In the end the trade was good for Parent because it was in Toronto that he became a teammate of his hero, Jacques Plante.

Parent left the Leafs with great acrimony in 1972 when he became the first Leaf to defect from the NHL ranks to the World Hockey Association. He signed with the Miami Screaming Eagles for $750,000 over five years. Miami's team didn't even have a rink when Parent signed and he ended up with the Philadelphia Blazers in the WHA for $600,000 instead. Parent quit the team during the 1973 playoffs in a pay dispute and forced the Leafs to trade him back to the Flyers.

Returning to the Flyers, Parent became a sports hero in the City of Brotherly Love. One local bumper sticker read, "Only the Lord saves more than Bernie Parent." Now part of the Flyers' Broad Street Bullies, Parent and his teammates won the Stanley Cup twice in a row, in 1974 and 1975. In both seasons, Parent won the Vezina Trophy as best goalie and the Conn Smythe Trophy as playoff MVP.

Sadly, Parent's remarkable career was short-lived. In a freak accident, a stick hit him in his right eye when he was 34, causing permanent damage to his depth perception and his ability to focus. Parent was forced to retire from hockey in 1979. He was then signed by the Flyers as "special assignments" coach in 1979, notably to advise goalies, just as Plante had once helped him. 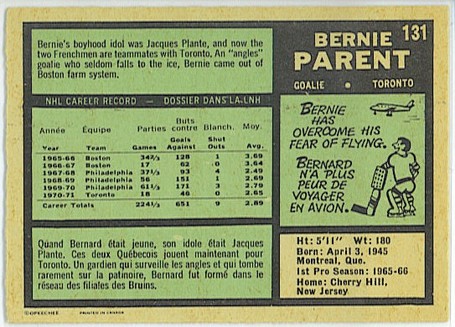