Where Are They Now? Episode Six

Share All sharing options for: Where Are They Now? Episode Six

This has grown out of a throwaway post that I wanted to use to get comfortable with some of the site's new toys. Little did I know what I was starting. Earlier episodes can be found here (one two three four five). This is the sixth overall and the fourth that only looks at players that JFJ brought in or kept that are no longer in the NHL. Think about that for a second... 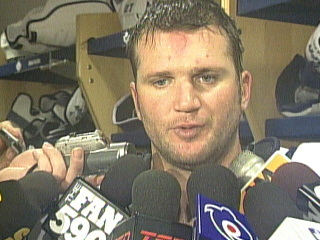 Sometimes, trading a fourth rounder for a veteran player can be a good idea when that player brings discipline, toughness, and a strong work ethic. Look at that picture. Does it look like Biscuits brought any of that to the team?

I know that O'Neill had some issues related to his shoulder and of course the death of his brother before he arrived in Toronto but could he have been any more disinterested in playing hockey? Sure, those stats don't look too bad but think back to his time with the Leafs and try to remember when he ever had an actual impact on the team? You can't because his points were all fluff.

It probably didn't help that Paul Maurice was the coach. If JFJ had done a little research he might have learned that those two hated each other.

I have no idea but I would guess that it involves a pickup truck, a basket of biscuits and a bowl of country gravy. 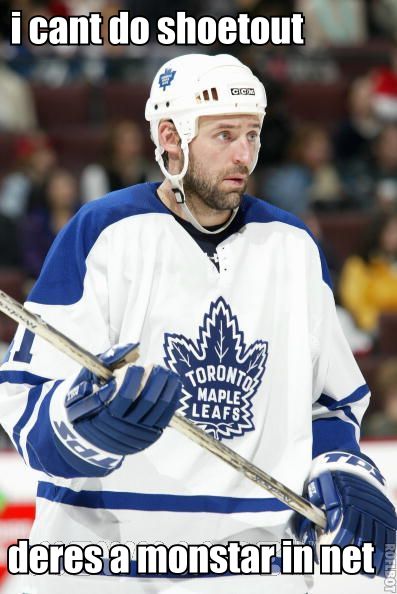 For the past two years The Fraud has had repeated updates that Jason Allison was trying to get back into the NHL. This year it has stopped because Allison has probably realized what everyone else knows: the game has passed him by. You can't be too surprised that he is a little slow on the uptake. At least not if you ever saw him try to take a penalty shot. Cars get moved through carwashes quicker than he would skate in on the goalie.

I remember seeing the 1995 World Juniors game on ESPN Classic two years ago and being stunned at a. how he had that thick beard back then and b. how he and McCabe had already perfected his incredulous look for referees.

How did he get 60 points? The powerplay. Look at that horrible, horrible plus/minus. It's not a perfect stat but combine that with O'Neill's -19 in that same season and you have an idea of why the Leafs missed the playoffs. 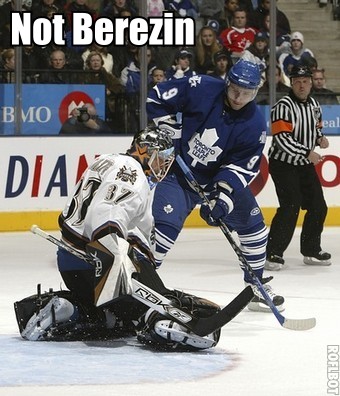 Guess who is still in the NHL? Ken Klee. I wanted Suglobov to be the next Sergei Berezin. Then again, anytime the Leafs have a fast-ish, undersized forward I want them to be the next Berezin. I think my dreams have finally come through with Grabovski although he is more like a new and improved version. Anyway, Alecksander took his funny spelling and went back to Russia after realizing that he wasn't good enough for the NHL. JFJ kept his job for one more year.

Being not good enough in the Kontinental Hockey League with CSKA Moscow.

Drafted by the Toronto Maple Leafs in the 3rd round (82nd overall) of the 2001 NHL Entry Draft.

I remember going to my friend's (best friend of Jay growing up) parents 25th wedding anniversary and seeing the huge Escalade that he had bought with his signing bonus. For a local boy, things looked great. Then JFJ decided to continually bring in terrible defencemen that prevented most of the kids from getting ice-time. Of course, both times that he looked like he was going to get a shot he broke his hand.

The irony of his running away to Europe, which an NHLer that returned whose name I can't remember referred to as telling the league that you have quit, is that he chose to do so in a year when he could have had a great shot at making the team or at least playing his way into the team's plans. He was a homegrown Jeff Finger-type but decided that he'd rather take more guaranteed money in Switzerland.

Jay Harrison currently has given up on his dream of playing in the NHL and has decided to play for Zug in the Swiss League. 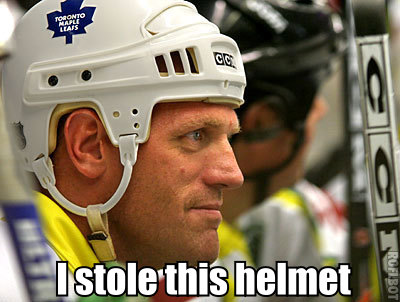 Wow. He didn't do half as bad as we have been led to believe. Sure, he was out of the league after the playoffs but at least this guy didn't cost the team anything. Not that this move didn't come flying out of whatever is past left field (deep left field?).

He's moved in the broadcast booth for Canal+. 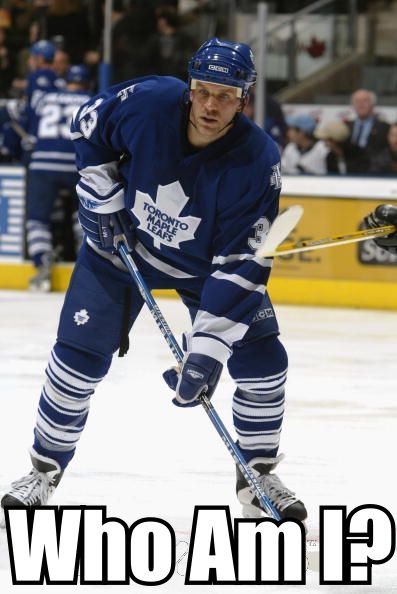 Claimed on waivers by Toronto from Anaheim, January 10, 2004

Can anyone remember anything about Craig Johnson? Seriously, I can't think of a single thing that he did while with the Leafs.

Plays in Austria for Red Bull Salzburg after three seasons in Germany.

And with that, Thank God, I think that we have come to the end of all of JFJ's signings that are no longer in the NHL. If I missed any in the four segments focused on him please bring them up.