"The Passion" That Unites Us All

Share All sharing options for: "The Passion" That Unites Us All

Editor's Note: Here is anoter installment in our quest to find a third contributor to the site. Please e-mail us your frank feedback even if you hate something. It'll help us come to our decision and since you folks have to read what the newcomer writes it behooves you to help. However, you do not get to benefit from their coffee runs. 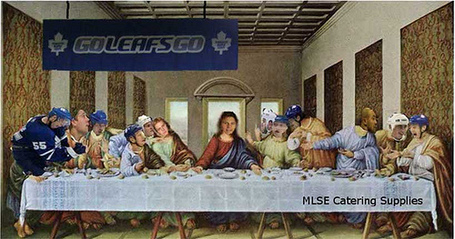 "In the beginning, God created the Heaven and the Earth. And the Earth was without form and void. And God said, ‘Let there be ice.’ And there was ice. God saw the ice and saw that it was good. And God separated the light (which he had already made before we came in here) from the darkness. God called the light ‘Leafs’ and he called the darkness ‘Canadiens’. There was evening and then morning. And that was the first day."

Religious fervour tends not to sit well with those of us of a secular persuasion. But even with paths as clearly marked to damnation as ours, we are still capable of moments of revelation and epiphany. My own came some time in January of 2002 as I sat on a couch in Whitby, Ontario and mentioned that this "Sundin" dude wasn’t doing all that much in the game. Right on cue, he scored. And so began my devotion to the (all) mighty blue and white.

Is it even possible to justify the obsession? Perhaps not, perhaps it truly is a matter of blind faith. There can be no rational explanation for faith – either you believe or you don’t. Once we are drawn to abstract notions, such as how a fully-grown man can be injured by a soccer ball or how certain goalies couldn’t save a puck if it was the size of a dinner plate, we realise that the Leafs are more than a team. We are as dogmatic and fundamentalist as the Spanish Inquisition.

Fundamentalism - As in, we put the ‘fun’ in…

The Ayatollah Khomeini may be dead now, but I think he’d recognise some of our beliefs. He would think we were wrong, certainly – but he would admire the degree to which we are prepared to be wrong.

Unlike a few limp-wristed religions I could name, we leave no room in our world for doubt. Jews may believe that they are God’s chosen people, but we know that Tomas should have waived his NTC in order that we might get our sticky mitts on Jeff Carter. There can be no true knowledge without giving in to the lure of Ian White’s moustache or Jiri Tlusty’s inadvertent exposure (we embrace the human body as a beautiful thing to be celebrated – even in the case of Jason Blake).

If the unbelievers choose not to repent, can they really have an objection to the fiery eternity that awaits them? We must go further, though. We smile and shrug and roll our eyes when the infidels talk of ‘planning the parade route’. The Mujaheddin would not stand that kind of nonsense. Let loose the death squads to purge this great nation of the wicked idolatry of ‘Senators’ and ‘Canucks’.

The Holy Shrines of Leafdom

Even as I write this, I hear the call of the muezzin and the peal of bells calling the faithful to prayer. And as it is written in "The Frank Mahovlich Story", I kneel on the floor and bow in supplication in the direction of Bay Street. Except when the Raptors are playing – then it’s Carlton and Church. But you get the general idea.

The silence in the Platinum seats in the first five minutes of a period has an unearthly intensity, only to be matched by that in the Philips Arena throughout a whole game. As you shoulder through an angry crowd at the intervals, to queue for the world’s most expensive alcohol, only one thought pierces your serene contentment – "Thank God I’m here".

The Gospel according to Matthew (Stajan) – "For verily, thou shall be blessed with eyes that will even make men do a little sex wee"

The Gospel according to Mark (Bell) – "Blessed is he, who in the name of charity of goodwill, knocks Alfie down onto his punk ass and then just kinda fades into the background."

The Gospel according to Luke (Schenn) – "Today in the town of David (alright, Saskatoon), a Saviour has been born to you."

The Gospel according to John (Ferguson Jr.) – Ah, shit…..

The Leafs would make a fine religion – and I particularly look forward to holy wars against the Thrashers and the Hurricanes. Our support gives us the gamut of human emotion in pleasure, pain, regret, sorrow and (very occasional) joy.  Rejoice, brothers and sisters, for this is the time of our cleansing – where we will be reborn and the Holy Trinity of Luke, Nik and Mikhail will lead us into the rapture.

For it is written in the book of Wendel…