Share All sharing options for: Maple Leafs 1 at Wild 6: Better To Never Try 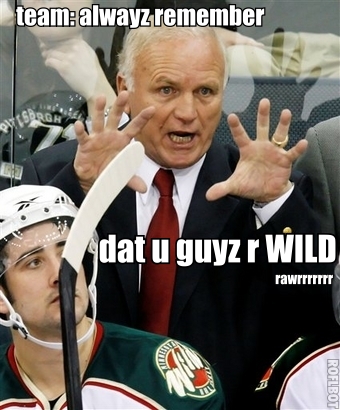 Courtesy of the hilarious NHLOL

This game was ugly for a variety of reasons from the final score to the Leafs' nap after they tied the game to Nik Antropov's absolute inability to score. Oh yeah, and because Chemmy leaves me voicemails sobbing about how mean I can be here is an example where I should have left well enough alone:

That defensive bent is probably why Justin Pogge will be getting the start tomorrow night. Brian Burke, that destroyer of all that is good and holy in the NHL, likely wants to test out his kid in a way that will allow him to evaluate him away from the usual media crush (it's another road game) and against a team that will provide a challenge but isn't likely to deal a crippling blow to his confidence. As Steve's post noted, Pogge looks to have becoming suddenly much hungrier than he has been in any of his previous seasons in the AHL. He can feel the opportunity available and his recent play suggests that he knows how close he is right now. Tonight is one more step.

Of course, rule # 1 on things that you should always have at the forefront of your mind when making any assumptions about the Leafs' opposition is this:

Obviously, there are some problems evident in the video with Pogge's and the Leafs' play.

These are all issues that Pogge will be able to work on in the AHL. It doesn't kill him to deal with a bad loss. In fact, it helps him to realize that size alone won't get him the starter's role. Will it affect his confidence? Well, since he won't go undefeated for his entire career it might be important to find that out. What would have happened if the Leafs' had won last night? Ron Wilson provides the play-by-play and gives the media a taste of their own medicine:

The thing that troubled me the most was Antropov's struggles. An early goal on one of his two breakaways would have probably altered the game's makeup but he looked so lost! Maybe on March 5th Brian Burke will reveal on Twitter that he ordered Antro to slow down in order to let Jason Blake become the Leafs' leading scored so that he could get that 2nd round pick for him. But odds are that he is struggling under the weight of expectations. It's up to Burke to decide whether he'll leverage that to get a better deal this summer or if it means that he doesn't fit into the plan. I hope it's the former.

After the game, I forgot to change the channel and was subjected to Nick Kypreos' opinion. For a guy whose career was ended in this fashion you would assume that he would understand that sometimes it makes sense to not fight this kind of guy:

They don't call him the Boogey Man because he's a figment of a child's imagination. Or if your name is Jonas Frogren and it's not your role to fight and, if you go by his treatment of Jarkko Ruutu, you are also a saint. Then he proceeded to shit on Pogge before frigging Darren Millard had to point out that it's hard to stop goals when your team gives up unfettered cross-crease passes.

So there is a lot to work on for everyone involved. What doesn't have to be worked on? The Wild's crowd. 313 straight sellouts represents every game in the team's history including the non-playoff seasons and the expansion years.

That is how you support a team through thick and thin.