An Open Letter To Andrew Raycroft

Share All sharing options for: An Open Letter To Andrew Raycroft

Editor's Note: In honour of our team's first meeting with two of everyone's favourite players I have asked their biggest detractors to provide a glimpse into what they will be feeling and thinking tonight when they see Mssrs. Tucker and Raycroft on screen tonight. First up, a man whose hatred needs no introduction: Eyebeleaf! 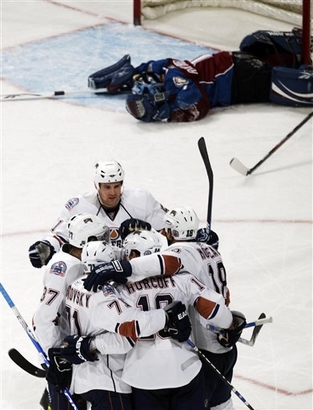 I must admit, I love that picture. It looks like you've been shot. If only I could be so lucky.

I kid, I kid. Calm down. I hate you, but that doesn't mean I wish a drive-by shooting upon you. I'm not a psycho, man.

So, tonight, we finally meet again. I won’t lie; I’ve had this game circled on my calendar for some time.

As of this morning, I’m not sure if you’ll actually be between the pipes tonight. It would be a shame if you’re on the bench but I wouldn’t be surprised. You don’t come across as the most motivated cat and that’s one of your biggest problems. If I were you, I’d be on my knees, begging to play tonight. I’d be desperate to prove to Leafs management and prove to fans just like me that I was not an epic failure of a goaltender.

You know, Andrew, I don’t hate many former Leafs. Actually, you’re probably the only one. And I’ve often wondered why.

I think, deep down, it goes back to the end of the 2006/2007 season. You were pulled from the final, most important game of the regular season, and the Leafs ended up missing the playoffs. Yet you had the nerve to tell everyone you were happy with your season. Happy with your 2.99 GAA, and .894 save percentage.

I’ve never forgiven you for that. I likely never will.

You were a Belleville boy, playing for the Toronto Maple Leafs as their number one goalie. You were living the dream. You should have taken it more seriously. You should have wanted it more.

I feel a great sense of irony as I write this, because Vesa Toskala has turned into the goaltending equivalent of a dirty slut. His numbers, frightening as they are, are actually worse than yours from 2006/2007. He looks apathetic in the crease and every bad goal that goes past him is, well, just another bad goal that goes past him. Actually, as much as it pains me to say it, he reminds me of you.

I’ve lost a lot of faith in Vesa this season. I don’t think he’s the goalie I thought he was. But tonight isn’t about Vesa. It’s about you. The Leafs can lose every game the rest of the way but I’ll be happy as long as they win – as long as they beat you - tonight.

It’s not even about revenge. It’s about giving a damn. You never did.

And my offer from weeks ago still stands. If you finish the season with better numbers than Toskala, that’s it, I’m done, I’ll never speak ill of you again.

You know, there haven’t been a lot of games to get up for in this difficult season so far but I’ll be cheering like it’s a playoff game tonight.

Here’s hoping you’re in the crease, and that the red goal light behind you shatters from overuse. May the shittier goalie win.