No, That's German for "The Tucker, The"

Share All sharing options for: No, That's German for "The Tucker, The"

Editor's Note: In honour of our team's first meeting with two of everyone's favourite players I have asked their biggest detractors to provide a glimpse into what they will be feeling and thinking tonight when they see Mssrs. Tucker and Raycroft on screen tonight. Now, a lone voice in the wilderness that has enlightened the masses: MF37! 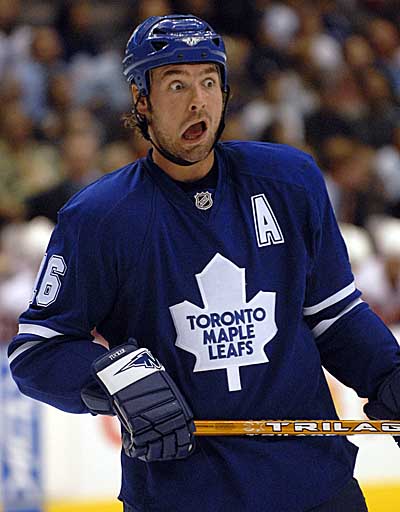 PPP Note: This picture is one small photoshop alteration away from depicting what Tucker did last year

With the exception of Mats Sundin, has there been a Leaf as polarizing as Darcy Tucker?

When one thinks of Tucker, it's just as easy to conjure up a big hit, countless cross-crease power play tap-ins and a little man willing to take on all comers as it is to recall countless bad penalties, terrible defensive play and a propensity to end up on his ass along the side wall scrambling after that helmet of his that somehow just couldn’t stay on.

Then there's the whole Sideshow Bob act: was it a display of passion and tenacity or a guy all too often playing on the wrong side of the edge (ask yourself this: if it was Tucker going after Kostitsyn instead of Grabbo what would the reaction of Leafs Nation have been?)

I don't know if it's unique to the Leafs but this is a fan base that (sometimes inexplicably) elevates certain players and vilifies others to degrees that aren’t quite warranted.

Hard work (or the perception of working hard) is often the tipping point that determines where on the Leafs Nation Effigy to ElegyTM spectrum a player ends up.

Even with (or maybe because of) his Sideshow Bob antics, Darcy Tucker was beloved by most of Leafs nation.

Tucker put up respectable numbers during his time with the Leafs, breaking the 20 goal mark in five out of his nine seasons in the Blue and White and he finished with a respectable 148 goals and 319 points in 531 games.

But he often struggled on the other side of the puck and had a penchant for taking untimely penalties.

My standard joke: The Darcy Tucker hat trick is a power play goal, a bad penalty and -2 on the night.

What these numbers don’t reflect is Tucker’s approach to the game. He was a small man who played a big man’s game. He threw big hits, would fight just about anyone, and if he ever had a thought, he seemed to share it with anyone and everyone on the ice.

While that may have brought him the adoration of Leafs Nation, this style of play may also have brought an untimely end to his career; which brings us to tonight.

For the first time since his buyout last summer (a final act of devotion or a final stick in the eye of the Leafs?), Tucker is facing the Leafs.

If history has taught Leaf fans anything, it's that former players (prospects, guys that wore a Leaf jersey once when they were 6 years old, etc.) have a long tradition of coming back to have big games against the Blue and White (see Boyes, Rask, Sullivan, Roberts, Bester, Bradley, etc.)

But for the first time in a long time I don't have that awful feeling that a former player is going to burn the Leafs.

Hip and knee issues have put Tucker on pace for just 9 goals this season and lowest point total since he broke into the league full time in 1997. He has all of 2 assists so far in 2009.

That level of production can't justify a $2.5M pay cheque. I wouldn’t be surprised if Tucker faces the ignominious fate of being the first NHLer to be bought out twice.

In fact, the fans in Colorado have already turned on him:

Terrible defensively, slower than paint drying, gets knocked on his ass all the time, takes stupid penalties, and tends to get in the way offensively. But, he's really good at tip-ins when he's not covered in front of the net. Too harsh? Maybe; Tucker does get some big hits in. But he's been a disappointment even compared to our low expectations. In general, I have been very pleased with the way Tony Granato has handled his personnel this year, but I don't understand why he keeps using Tucker late in the game.

Darcy Tucker is still getting powerplay time based on what results? Wojtek Wolski, Milan Hejduk, Ryan Smyth, Marek Svatos, Chris Stewart and Cody Mcleod are all scoring at a better rate than Tucker. They were all in the lineup. So was the slumping T.J. Hensick who might benefit from a little boost to his playing time.

Darcy Tucker has shown a bona fide "lack of effort" in a lot of games this season. He takes stupid penalties and doesn't offer anything on the defensive end, and offers very little on the offensive end. He just looks disinterested.

The fact is, Tucker never should have been re-signed by JFJ.

Yes, he was having a career year but how refreshing would it have been for the Leafs to finally trade a player at their highest value? If Nagy’s eight goals were worth a first rounder and a player at that trade deadline, imagine what Tucker might have been worth?

I don’t know that I’ll boo him tonight. It’s hard to get riled up about a guy who’s so clearly on the downside of his career.

Moreover, like McCabe I’d rather just treat all these ex-Leafs that were signed to awful contracts by JFJ as treyf.

So instead of espousing hatred, or suggesting anyone boo, I'll just ask that Darcy Tucker be kept front and centre in the lack of leadership debate that swirled around this team when Wilson first took over. That he be remembered as a key cog in the problematic Corson-Green clique that caused a schism in the Leafs dressing room. And finally all Leafs Nation remember Tucker as one of the primary members of the NTC 5 who refused a trade at the deadline, refused to waive his NMC in the off-season, refused to help this franchise re-build and finally demanded a buy-out that saddled the Leafs with a cap hit through to 2013.

And no matter where on the effigy to elegy spectrum one might put Tucker, I think all Leaf fans can come together in the hope that Tucker doesn't get the GWG against the Leafs tonight.