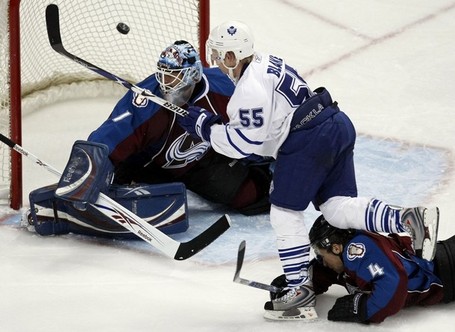 Last night was a weird game. For instance, the above picture should be shocking but it isn't. Jason Blake has been hot hot hot lately, and we all watched Raycroft suck enough for two years to know that he lets in goals and looks like Goofus.

I had the privilege of listening to the Avalanche broadcasters last night and as much as I complain about opposing team's announcers I'd like to say that I really enjoyed the Altitude crew. Why? Was it because they were particularly knowledgeable? Not really. They put their foot in their mouths constantly and I loved them for it. As a side note I'm an unabashed fan of the NESN announcing team of Jack Edwards and Andy Brickley.

The first time the announcers stuck their foot in their mouth was two minutes into the game. As the announcers were lauding Colorado's early pressure Luke Schenn absolutely annihilated some guy in a purple jersey and the Leafs were off. Grabovski got the puck in the corner and made a nifty spinning pass out to Antropov who stickhandled around Raycroft and the rest is on the game sheet.

The game was a back and forth affair. It was tied up four seperate times. The first time, TJ Hensick made an incredible pass to Stewart to get Colorado on the board. He made a slick little move and laid down the softest pass I've ever seen in the NHL which almost stopped dead on the open side of the crease where a streaking Stewart speared it home.

The two teams traded goals, with Grabovski and Hejduk picking up a tally before the unthinkable happened. Usually in games against former Leafs, ex-players like Steve Sullivan run wild on the Leafs defense and absolutely demolish their former team. Last night Toronto fans got to see that in the other direction when Kulemin rifled a pass across the blue line to Finger who stepped up to the plate and fired a strike past Raycroft's club like glove hand.

With the game once again tied, the Colorado announcing team had the following gem:

That made the score 4-3 Leafs. The Avalanche would tie the game up again just three minutes into the third. This set up embarassing moment #3 for the announcers at 4:56 of the third. Describing how the Avs had climbed back into the game the announcers said this about Raycroft with the Leafs in the offensive zone:

You pitch a shutout the rest of the way, you have a good chance to win this game. Goal Jason Blake.

And that's all she wrote. Stajan potted a goal off of a Stempniak rebound and got flattened afterwards prompting a scuffle and Dominic Moore inflated his trade value with the Leafs 7th goal of the night to stick a fork in the Avalanche.