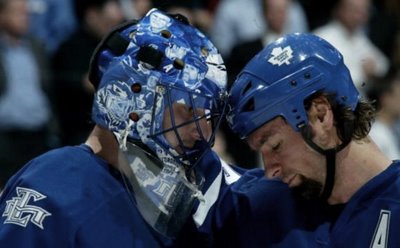 Who knew all it would take is Raycroft's presence (or should that be presents) to cure Toronto's scoring woes?

Actually it probably wasn't a huge surprise to Leafs' fans watching on television. They'd seen him swim around his crease like this on many nights in Toronto.

"I didn't know whether to laugh or cry," said the beleaguered goaltender afterwards.

"So basically I decided that I did my best and I can't ask for anything more. Oh well. Where's that pot? Might as well get up to the ski lodge"

This was supposed to be the night that Darcy Tucker and Raycroft exacted some manner of revenge for being bought out by the Leafs this summer. That didn't happen. Tucker was a non-factor, particularly after Schenn pasted him to the ice with a solid check in the second period. Raycroft? Well, let's just say that there were shouts of 'I told you so,' throughout Leafs Nation after his weak effort.

- Jeff Blair, The Globe and Mail

I am not too sure if all of Leafs Nation was revelling in their failures, although we have done plenty of that today, so much as weeping as missed opportunities. Tucker was an impending unrestricted free agent that was potting powerplay goals like it was going out of style. Were there suitors for his services? You betcha. Raycroft was a restricted free agent and the Bruins had no plans for him. Did JFJ have to trade Tuukka Rask for him? Were there no other options available?

You know what I was doing last night? Weeping. Damn you JFJ. 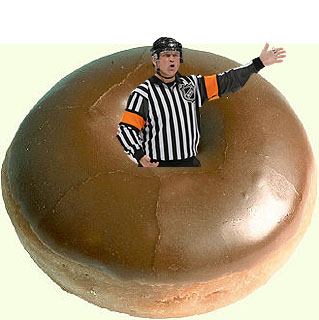 And, make no mistake, our fair-haired boys were the victims of a horrible call tonight by Don "Have another donut, you fat pig" Koharski. Ryan Smyth gets pushed into the goalie - and barely touched the goalie anyway - and gets called for goalie interference, thereby nullifying Milan Hejduk’s third goal of the night and causing lots of fans to lose their hats for nothing.

You're angry? That stupid call cost us our usual collapse and put two points between the Leafs and the senators. It's a good thing the Islanders and the senators also won their games last night or I'd be really upset.

Tonight, we had a goalie (Andrew Raycroft) give up seven goals against the team that bought his contract out to rid themselves of him. He was, in essense, the replacement for Theodore. You had a guy named Darcy Tucker go pointless in an 11-goal game against his former team, which also bought out his contract to rid themselves of him. This is the guy who was said to be the answer to the loss of Brunette.

I feel really bad for Avs fans. Well, as bad as anyone can feel for a team that won two Stanley Cups after leaving Canada. Way to earn it Colorado.

So much for that whole "Andrew Raycroft As Reliable Starting Goalie" thing.  Remember when he was the Colorado Avalanche's savior after Peter Budaj failed to deliver consistently?  Yeah, not so much.

If only their management had read my fanpost before signing him they would have been disabused of any such notions.

The Avalanche defense is the most overrated, most overpaid, and softest in the NHL.  Liles had a solid game and is paid to put up points and move the puck.  What is the excuse for the other 5 disinterested indivduals in those godawful uniprons?

Maybe they could have used Bryan McCabe? So what's the brighter side of last night's game? At least we're not Avs fans right now.