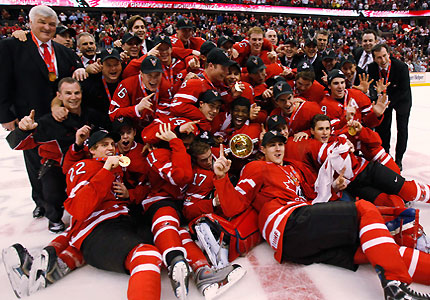 TOKARSKI SAVES! His pedigree as a Memorial Cup MVP finally shone through as his positioning was impeccable and the only blemish came courtesy of a deflected shot. Crow has never tasted so good!

Friend of the site Pat Quinn led a third Canadian squad to a gold medal. He has surely put himself one step closer to making a return to the NHL.

Congratulations to all of the kids for an amazing performance after Benedict Mirtle labelled them the underdogs. This was as close to perfect as you can get in a game of this magnitude against such a great opponent.

Some lament that Canada is the only country that takes this tournament seriously (strange, it looks like the other countries send their best players and are devastated when they lose) or that Canadians take too much pride in their country's accomplishments. Well, it's nice to see Canadians stop being shrinking violets in at least one regard. We are far too humble about far too much so it is nice to see 20,0000 rabid Canadian fans supporting their team with every ounce of energy even if it involved booing a couple of teenagers*. O Canada never sounds so good as it does after a Gold Medal final.

Congratulations to everyone involved in putting together an amazing tournament and bringing a fifth straight gold medal home. Let's hope that the next few years aren't as bleak as the ones the proceeded the last time Canada won five in a row.

* Gord Miller said that the ottawa fans were booing Hedman every time he touched the puck. No way. This is the same fan base that took three years to react to Alfredsson being booed by booing Sundin. Those were Leaf fans leading the way.