Share All sharing options for: Preview: Panthers at Leafs 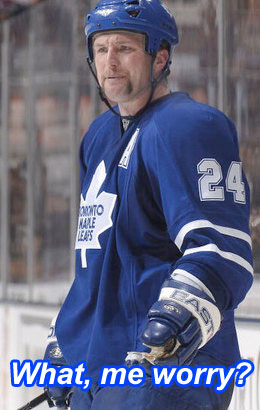 The Panthers are two points ahead of Toronto, with a 17-16-6 record to Toronto's 16-17-6 record. I'm sure a lot of you feel like the Florida Panthers are Toronto's wimpy kid brother who we kick around (From our SBNation news ticker: Toronto has won four of five and 10 of the last 13 meetings.) and give our garbage like McCabe, Kilger and Wade Belak. Sometimes our garbage doesn't even report to Florida but Florida still gives us Mike Van Ryn. That's true familial love.

Bryan McCabe had a rough go of it last year, and by "a rough go of it" I mean that he gets paid millions of dollars to play hockey don't feel sympathy for him when he screws up. Ditching McCabe for Van Ryn was a beautiful move, most notably because Mike Van Ryn is both better and cheaper than McCabe, and he doesn't hold his hands up like a goof every time he cross checks a guy without the puck while standing next to the ref. In other news I'm almost 100% sure that eyebleaf is JFJ.

Hopefully McCabe works his magic and scores on Vokoun to make it easier for the Leafs to climb to .500. On the injury front, LUKE SCHENN is back in the lineup tonight.

Oh hey, look who cares enough about hockey to play like an NHLer again!