Share All sharing options for: The Maple Leafs' Goaltending Dilemma

We had huge plans of doing previews for all of the individual players but then Burke made some trades and there was actual competition for positions and then players were sent to the Marlies and then, well, life happened. So instead, you get three previews that'll go by position. If you don't like it...well, you can write your own player previews.

We're going to start out with the most controversial of all topics: the Toronto Maple Leafs' goaltending situation. Since the lockout the Leafs have been 21st, 25th, 27th, and 30th in goals against. What to do about the team's goaltending this year has become a very passionate debate on par with the Great Sundin Debates of Aught Eight. To say it's generated some heat would an understatement. Obviously, what Chemmy and I wish would happen is that someone hypnotise Vesa Toskala, tell him it's the 2003-2004 season so that he might be tricked into returning to a time when he was posting elite numbers because since then he has been average at best and terrible at worst. This isn't some witch hunt inspired by a couple of (now seemingly regularly occurring) softies. This is a request that the acknowledgement be made that Toskala, at the age of 32 and after numerous surgeries, returning to his best form in Toronto (year one) is neither likely nor good enough. After the jump, I'll show you some numbers that will likely make you cry so before that I'd invite to watch this video and build up some (or more) sympathy for the guy with this video. To the accompaniment of I Tried So Hard by Bone Thugs N Harmony:

Now some people have suggested that Toskala is being magically thrown under the bus without any provocation. Yes, the comment that Toskala has 'sucked for 7000 minutes' comment was me and it was mostly facetious because it should have read "he's been mediocre for 7000 minutes'. I'm not going to sit idly by and let crap and misleading statistics be spouted in defence of the Finnish goaltender because all they do is prove that Mark Twain was right when he said, "there are three kinds of lies: Lies, Damned Lies, and Statistics." Especially when the source has consistently taken the correct path previously.

Many will defend his ability, arguing that he is a skilled goalie playing behind a suspect defense. Frankly, that might be true in an individual game, but over the long haul, trends are definitely discernible...Either way, Toskala's recent level of play can not continue if this team hopes to improve elsewhere on the ice. 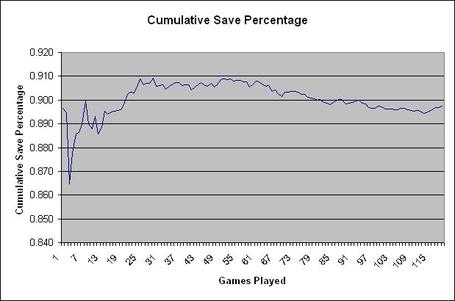 However, a closer look shows that in 2007-2008 a .900Sv% would have placed the goalie 38th in the league among goalies that played at least 27 games. Vesa Toskala's .904 was good enough for 31st in the league while his high of .909 would have tied him with Marty Turco and Nikolai Khabibulin for 24th best in the NHL. He ended the year 9th in shots faced while every goalie ahead of him had a better save percentage but one who tied him. One of those goalies, Ilya Bryzgalov, played on a team that finished below the Leafs in the standings. In the top 30 in shots against only Rick DiPietro (.902), Olie Kolzig (.892), Johan Holmqvist (.898), and Chris Mason (.898) had worse save percentages. Even worse, the goalies for three teams that finished below the Maple Leafs in the standings had goalies with better save percentages.

2008-2009 is obviously a much worse example. The mythical benchmark of .900 would have left Toskala in 37th place among goalies that played at least 27 games while his real save percentage of .891 had him in 44th place. The only goalies behind him were Chris Osgood, who kills the theory that good defensive teams make good goalies all of the time, Johan Hedberg, and Manny Legace. His peak cumulative save percentage would have placed him in 28th along with Ty Conklin and Cristobal Huet. He faced the 20th most shots in the league and obviously everyone above him had a better save percentage. But what about the team's awfulness?

Before anyone defends Toskala against my horrible criticisms, and argues that the Leafs as a team have played a proo game defensively in fron of him...they should consider the fact that I'm including Atlanta, the New York Islanders, Dallas, St. Louis, Los Angeles, Columbus, and every cruddy NHL franchise so far this season in my analysis.

Exactly. The point of those numbers is to highlight that Toskala has been nothing more than mediocre during his tenure with the Leafs. Even if he recaptures the best long-term form of his time in Toronto it won't land in the top half of the league. Is that what we want to settle for? As for the San Jose days? His last year in 2006-2007 he only played 38 games and posted a .908 save percentage. The year prior he played 37 games and had a save percentage of .901 behind the eleventh and fifth ranked teams in the standings respectively. You have to go back to his 28 games played in 2003-2004 to see a save percentage worth getting excited over when he posted a .930 figure. What are the odds that a 32 year old coming off of multiple surgeries will recapture that form? Ultimately, this sums up my thoughts on Toskala

I'm not saying that Toskala is incapable of good goaltending. He is more than capable of a good stretch of play. What he has yet to provide the Leafs with is a solid run of play that lasts more than 6 or 7 games. 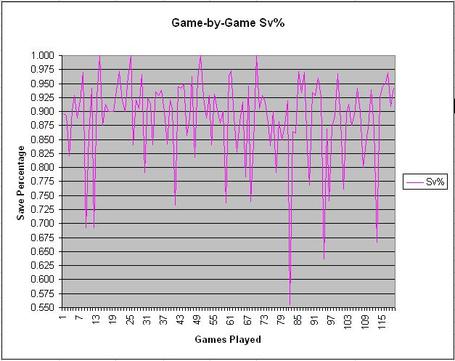 This is a graph of Toskala's game-by-game save percentage. It looks like he is having a heart attack which is what most Leaf fans can feel coming on every time a shot is directed towards the net. Here are some numbers from that graph:

That gives you 59 games above .900sv% and 60 games below it. That's the definition of mediocre. Now, you can pick and choose short snippets of his time in Toronto when he looked good and try to ignore the fact that the more games that you look at the worse he looks. But why stop with him? Mikhail Grabovski is an equally streaky player:

Look at that! 32 points in 27 games! Over 82 games that works out to 97 points. HOLY SHIT! Unfortunately, the reality is that any improvement in Grabovski's game will be much less dramatic than that just like any improvement from Toskala most likely won't be enough to get him into the level where the Maple Leafs need their goaltending to be in order to improve enough to a. keep that first rounder they traded to Boston from becoming Taylor Hall and b. make the playoffs. So what to do?

Unfortunately, the alternative is to throw rookie Jonas Gustavsson, he of the microscopic GAA and astounding GAA in the SEL, to the wolves. Ideally the plan would be to ease him into the NHL with a couple of spot starts and some strong practice time to make up for his abbreviated training camp. Ultimately, the Leafs will have to determine whether The Monster is going to be the future of the Leafs in net or if he is just the next Mikael Tellqvist. Ron Wilson has already stated emphatically that Vesa Toskala is the man in net starting on Thursday but the Leafs can't afford to give him too long to find his feet after a couple of major surgeries and the hiring of a new goalie coach. The race for eighth place will be tight and every point lost in October will be sorely missed come April not to mention those in November.

At 32 years of age and six years removed from his last flirtation with an elite save percentage Vesa Toskala is clearly not the man that will be tending net when the Leafs become Stanley Cup contenders. It's going to either be Jonas Gustavsson, James Reimer, or some other goalie that we cannot even imagine at this moment. If it's not The Monster than Joey MacDonald needs to come up because missing the playoffs might not be a disaster for a rebuilding team but for one that has sacrificed it's first rounder finishing in the lottery because they kept the faith with a mediocre goalie would be one.

So it's clear that this is not just a knee-jerk reaction as much as some try to paint it. This is not a case of Leaf fans being fickle. We are demanding better than we have seen over two seasons. As for the injuries, yes, they had an affect on Vesa but it's hard to give him the benefit of the doubt when he chose to hide his injury from November 11th until he was called out by Brian Burke at which point he finally sought treatment. Even if that's held up as a reason to have hope his recent record suggests that an improvement likely won't amount to much. Toskala will be given the starter's job along with the rope to hang himself if he fails. I hope to God he doesn't but at the same time that rope better be pretty damn short because there is only one way that the Leafs will have any hope of improving:

If the Leafs hope to improve, they need a HUGE improvement in their goaltending, and they need it ASAP.