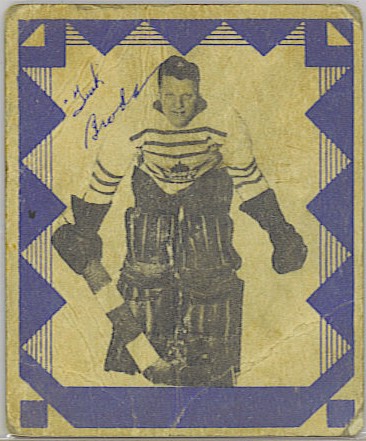 Once again the season is upon us and it's time to pick an LotD that I hope will set the tone for this year.  Last year, it was Johnny Wilson, reflecting the newest and most important addition to the Leafs.  This year, it's a leap of faith.

I'm glad that I'm not the first person to look at Jonas Gustavsson as the new Turk Broda.  These guys  beat me to it.

It's an easy comparison to make, though.  I mean, Gustavsson wears #50, while Broda was, uh, erm, still playing in 1950.  Gustavsson is "the Monster," for reasons as yet unclear to me, but that sounds kind of dangerous and threatening.  Broda was the "Turk," because his freckles made his face resemble a not-terribly-dangerous turkey egg.  Gustavsson is a tall, lanky Swede, Broda was, um, not particularly tall, kind of chunky and from Manitoba, where there might be Swedish people living, even if he wasn't one of them.

OK, so it doesn't particularly work.

What Jonas Gustavsson represents, though, is the opportunity for this team to have a signature goalie for an extended period of time.

The Leafs have a long traditon of bringing in goalies from elsewhere, typically later in their careers.  The number of occasions where they actually break in a top-level goaltender and have him for an extended period of time is quite small.  The last was Potvin, who broke in 17 years ago.  Before that, as much as I loved Bester and accepted Wregget, it was Palmateer in 1976.  Before that?  It's Broda.  There have not been that many, and if Gustavsson can join that list, it will really be something to see.

As for Broda himself, he was the real deal.  The most remarkable thing in my mind about him is that despite having last played a game over 57 years ago, he still holds all the significant goaltending records for the Leafs.  The first half of his career was spent in a league that played a 48-game season, and yet he's still the all-time wins leader at 302 and the all-time shutout leader with 62.  He also accomplished this despite losing three of his prime seasons to the war effort.

He was a happy-go-lucky sort of a guy, which helped a lot in a time where lots of great goaltenders were quitting with nerves that were shot.  It wasn't uncommon to find him napping before a game.  He was never particularly svelte as an athlete, not that it seemed to hurt.  It did irk Conn Smythe enough that he once suspended Broda until he could get his weight down, leading to a long period of daily front-page updates on the state of Broda's diet and an eventual headline in six-inch letters reading "BRODA HITS 190!"

Turk only won a pair of Vezinas.  For most of the 1940s he was up against Bill Durnan and Bill would take the regular season awards.  The playoffs was Turk's time to shine, though.  he had a 60-39 playoff won-lost record and a career average under 2.00.  He led the Leafs to five Stanley Cups, the most of any Leaf goaltender.  Bower is second with four.

I have no idea what Gustavsson will turn out to be.  It's interesting, though, that part of the sales pitch to him was to put his number 50 at the end of a long line of sweaters representing the greatest Leaf goaltenders of all time.  The one at the head of that list?  Broda.

No pressure, kid.  Good luck and go get 'em.

There's only a few seconds of play here starting at 3:33, but it's the Turk in action and it's the only clip I can find:

The HHOF take on Turk:

"Broda grew up in Manitoba and was developed as a player in the Detroit minor system, playing with the Olympics in 1935-36. He was discovered by Leafs owner Conn Smythe, who was in Detroit to check out another goalie, Earl Robertson. But when Smythe saw Broda at the other end, he immediately contacted Jack Adams of the Red Wings about acquiring Broda, which he did for just $7,500 cash. Broda joined the Leafs that fall and remained the crease guardian in Toronto for most of the next 15 years.

Turk's outgoing style made him hugely popular with Leafs fans and loved by his teammates. "The Leafs pay me for my work in practices," he joked, "and I throw in the games for free." His first stint with the Leafs lasted until 1943 and included the historic Cup of 1942, when the Leafs rebounded from a 3-0 series deficit to beat Detroit in seven games. But in 1943 Broda joined the army and went off to England for two years, primarily to play hockey.

When he was discharged in 1945, he went straight to the Gardens and resumed practicing with the team. He was back in the nets, and there he stayed for four more Stanley Cup finals, three in a row from 1947 to 1949 and one more in 1951 in which all five games went into overtime against Montreal. "I couldn't beat him. Toe Blake couldn't. None of the Canadiens could," Maurice Richard said after that series. Broda played the entire season in goal in eight of his 11 seasons, and part of two others, leading the league in shutouts twice. But for all his fame and glory, he's also remembered for his weight problems, which Conn Smythe used as a kind of playful publicity stunt.

Smythe ended Broda's run of more than 200 starts in a row when he ordered Broda out of the goal until he got his weight down to 189 pounds. For days afterward, newspaper articles showed the smiling goalie sitting on a scale eating steak or drinking juice for dinner in an effort to lose the poundage. Broda joined a fitness club and took up handball to stay lean, and his wife, Betty, became famous for being the one person who could help him lose weight and save the city's team.

Broda in practice was also famous. When the players had to skate laps around the ice, coach Day would skate directly behind Broda, who was in full equipment, hollering at him to keep up and join the race. When in goal, Broda would face wave after wave of shots, then Day would take the goalie's stick away and force him to stop another series of pucks using only his arms and legs.

He retired after playing only one game in the 1951-52 season. Broda was accorded a special night at the Gardens by Conn Smythe, one of the rarest honors bestowed upon a Leaf. That night came on December 22, 1951, and players and executives from Toronto, the opposing Bruins and every other NHL team gathered to pay respects to one of the greatest goalies of all time.

He was inducted into the Hockey Hall of Fame in 1967." 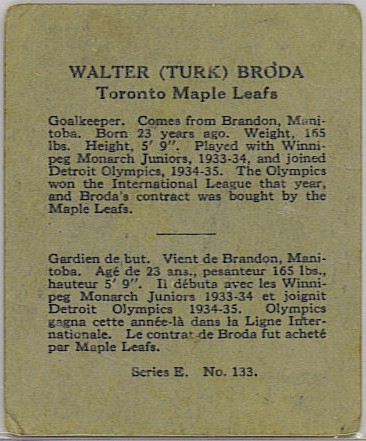