How Do The Maple Leafs Allocate The Salary Cap?

Share All sharing options for: How Do The Maple Leafs Allocate The Salary Cap?

Yesterday On October 8th (I wrote this post originally on the 9th) James had a piece looking at where the money was spent by the top five teams last year. Robot Godzilla previously took a look at how the Leafs' spending on defencemen, forwards, and goalies compared to the rest of the league. Considering that Jeff Finger is making $3.5M to sit in the press box it's no surprise to find out that the Leafs are spending the most on defence. Luckily, they are currently also getting the least in return. Wait...

Anyway, here's Mirtle's intro (ps. He went to Barcelona on vacation. Must be nice):

This is something I was working on before vacation, a mini-study of how five of the NHL's best teams are allocating their cap space this year. The five I went with are all right up against the cap, and all experienced a ton of success last year: The Sharks, Red Wings, Bruins, Capitals and Penguins.

After the jump I'll look at how the Maple Leafs stack up to last year's top five teams and where they might improve their monetary allocation.

One note is that I used John Mitchell as the 12th forward in the 'bottom 11' players category because the Leafs are going to carry a 23 man roster for the foreseeable future. This is a result of the lack of waiver eligible forwards in the lower ranks other than Jay Rosehill who isn't included in these figures. First up, is the visual representation of the money split among the top 11 and bottom 11 players for last year's top five teams: 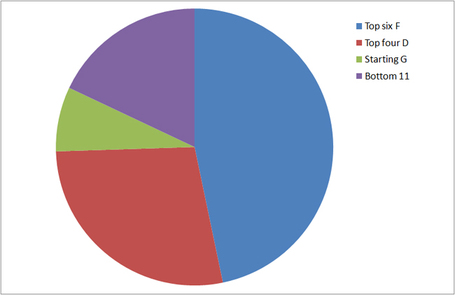 Here is the same graph for the Maple Leafs' 23 man roster: 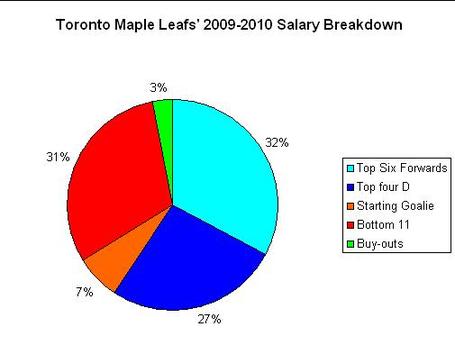 For the purposes of this exercise here is how I categorised players:

You'll notice that Mike Van Ryn isn't included in the calculations and that's because he might as well not exist.

Mirtle was never taught to put a legend with a graph so the differences aren't as visible as they should be. In order to salvage this entire exercise check out the first table below:

The Leafs are on par with the top five in terms of spending for their top four defencemen and their starting goalies. It's no surprise, given the lack of elite forwards (aside from Kessel we hope) that the Leafs have spent $7M less than the top five teams from last year. The real shame is that, as a result of some poor decisions, the extra spending hasn't gone to augmenting the top four defence or the starting goaltending but to the 'bottom 11 (or 12)'. One of Burke's big goals will have to be to get some of that money freed up so that it can be invested in the high end players.

From among the forwards Lee Stempniak ($2.5M), Alexei Ponikarovsky ($2.1M), Matt Stajan ($1.75M), Wayne Primeau ($1.4M), Rickard Wallin ($800K), and Jamal Mayers ($1.33M) are unrestricted free agents while Nikolai Kulemin ($1.5M) and John Mitchell ($500K) are unrestricted free agents. That frees up about $11.88M to be re-invested into the forwards. If we follow the breakdown above that would mean re-investing $5.52M into the top six forwards. To get the team's expenditures on their top six forwards up to the same percentage the Maple Leafs would have to invest another $4M on top of that to get close. Now if only there was a player worth that kind of coin... The rest of the bottom six will have a lot of players on the Marlies and possible juniors to pull from to fill the spots. Considering Brian Burke's stated preference with which we are all well, well aware (Top Six v. Bottom Six) and his statements about the Leafs' current make-up ('Top' Nine v. Bottom Three) it will be interesting to see what moves he makes to address those gaps through free agency versus internal promotions. The former would be expensive and cuts into the money available to fill out the top of the roster which is where the top five teams are choosing to spend their money.

The gap in high end players is most visible when you look at the Leafs' starting six compared to the top five average. The starting six (Kessel, Blake, Stajan, Komisarek, Kaberle, Toskala) make $10M less which again shows that he Leafs lack in star power. Balance is all well and good but there is a lot to be said for having a superstar or two in the ranks. If you look a bit closer you see that the majority of the difference comes from the top forward line and Matt Stajan's $1.75M salary. If he remains with the team next year his raise will cut the gap somewhat but the case then won't be how the Leafs have allocated their money in terms of the players' place on the roster but if it is going to the right players.

In terms of the overall splits the picture is similar:

No surprise here as the Maple Leafs again spend more than the average on defence and less on forwards. Among the defence the Leafs have Garnet Exelby ($1.4M) and Mike Van Ryn ($2.9M) as unrestricted free agents and it would beggar belief to see either one return to Toronto. Ian White ($850K) is a restricted free agent who will likely be re-signed to fill in the sixth spot leaving the seventh and call up spots to Phil Oreskovic (who is an RFA), Juraj Mikus, and Carl Gunnarsson.

The other figure where the Leafs far outspend the top five is in buy-outs. Every dollar spent on a buy-out is dead space that hinders a team's ability to sign their own RFAs and UFAs and pursue others. As players like Viktor Stalberg, Christian Hanson, Luke Schenn, and Tyler Bozak come up to be re-signed the Darcy Tucker buy-out will be a niggling problem but it's vital not to add to it by going through some of the proposed buy-outs I've seen suggested.

I'm going to try to expand this analysis a bit further this week but let's hear what everyone thinks about the numbers so far.