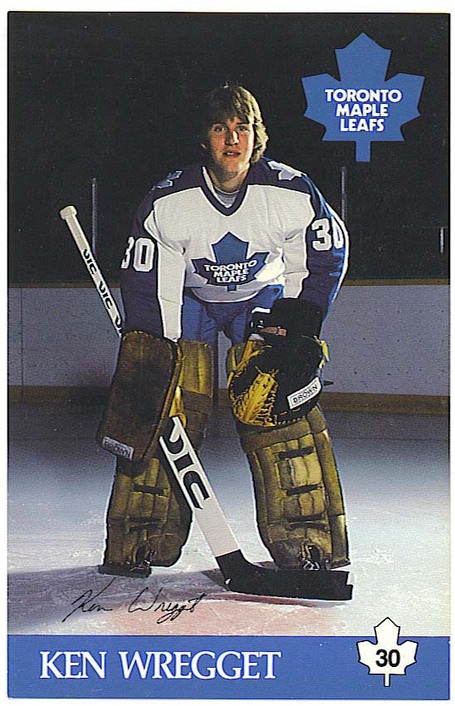 I was going to look it up but Gord Stellick was nice enough this morning to mention that the '85-86 Leafs went 1-12-3 out of the gate, so for all the talk that this is the Leafs' worst start ever, take it with a grain of salt.  They just got that one win early.

Anyway, I hadn't really intended to have yet another goalie LotD but it's '84-85 day and they're coming in the order they're kept in the binder, so we lead off with Ken Wregget, wearing what would later be Allan Bester's number 30.

The '84-85 Leafs had had another goaltending controversy in training camp (plus ca change...), this time dealing with Mike Palmateer.  Mike's knees were all but gone.  He'd had surgery yet again in 1983-84 and missed a lot of time for that, along with a bout of pneumonia that took him out for another stretch of games..  He did manage to pass a physical, though, so his '84-85 contract kicked in to the tune of $300K.

One thing Palmateer wanted, though, was to limit his practice time.  Figuring that the knees only had so much in them, he wanted to avoid skating aroud the time he was going to be starting.  This didn't sit well.  When he got lit up in a pre-season game, the Leafs waived him and his career was done.

This meant that the Leafs went into the season with a pair of 20-year-old netminders (Rick St. Croix was also still kicking around, but wasn't one of the starters) in Wregget and Allan Bester.

For all Bester had done the previous season at age 19, the Leafs really had their eye on Wregget.  He'd only played three games in 1983-84 (split them) and had an average over 5.00, but the win was an 8-6 triumph over Hartford in which he faced 54 shots.  He was the WHL goalie of the year and a first-team all-star.

In 1984-85, Ken would go 2-15-3 and would spend some time in St. Catharines.  The entire goalie situation ended up being a complete mess until the Leafs promoted a Flames castoff named Tim Bernhardt.  He immediately became the starter and any success the Leafs had in the second half was basically his doing.

Wregget would be firmly in place as the Leafs' starter by late 1985-86 and he backed them to their first playoff series win since 1979.

I always found Ken to be the sort of goaltender who really needed a two-month season - October and April.  He come out of the gate like a house on fire, have an average below three, and then from November through March get lit up.  If the Leafs could squeak into a playoff spot, all of a sudden Ken was the second coming of Terry Sawchuk.  If you look at his career in Toronto, his regular season average is 4.34.  In the playoffs?  2.93.  A Leaf goaltender having an average under 3.00 in those days is about the equivalent of a sub-zero average today.

Ken would be dealt to Philly in March 1989 for a pair of first-round picks.  Other than the fact that the Leafs had three first rounders that year and spent all three on players from Belleville, the interesting thing about that trade is that Ken had mono at the time and hadn't played since January.

He went on to be a pretty solid NHL goaltender, winning a Cup in Pittsburgh.

Ken doing his thing in the playoffs:

1984-85 factoid:  There were only two goalies (who played enough games to qualify) in the NHL with a GAA of less than 3.00 - Tom Barrasso and Pat Riggin.  There was only one goalie with a save percentage of better than .900.  The inimitable Warren Skorodenski led with a .903.  Pelle Lindbergh was next at .899.

The HHOF take on Ken:

"Ken Wregget was a 3rd-round selection of the Toronto Maple Leafs, 45th overall, in the 1982 NHL Entry Draft. Wregget enjoyed two superb seasons with the Lethbridge Broncos of the Western Junior Hockey League. In fact, Wregget was the number-one goaltender while his backup was a fellow by the name of Ron Hextall.

Wregget got his feet wet by playing in three NHL games in the 1983-84 season, winning one, losing one and tying one while posting a high 5.09 goals against average. In 1984-85, Wregget tended goal for 23 games in Toronto and 30 the following year. It became apparent he was now the Maple Leafs' top goalie and in the 1986-87 season his workload increased to 56 games. He had a 22-28-3 record with a respectable 3.97 goals against average on a team that was sorely lacking in talent. He followed that season with another 56-game performance in 1987-88, but the win total dropped off to just 12 and the goals against increased to 4.44.

As the 1988-89 season was winding down, the Maple Leafs sent Wregget to the Philadelphia Flyers, who were looking for a front-line goaltender heading into the playoffs. Wregget spent the next two seasons playing in Philadelphia, but he was never able to take advantage fully of the opportunity with the Flyers, despite playing in 51 and 30 games each season, respectively.

Once again Wregget found himself on the move at the trade deadline, this time winding up in Pittsburgh, where he was the backup for Tom Barrasso. With Barrasso injured for part of the playoffs, Wregget filled in admirably and was a key factor in helping the Penguins win their second Stanley Cup in a row. Wregget tended the Pittsburgh goal for another six seasons before moving on to the Calgary Flames for the 1998-99 campaign. In 27 games he registered a 2.53 goals against average, the best of his career.