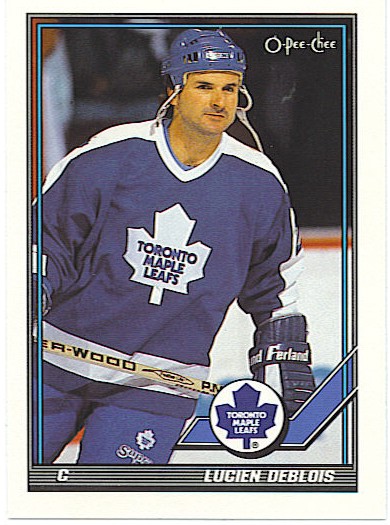 In reading the comments from the 1990-91 (BESTEST SEASON EVAR!!!1) bit yesterday, a couple of things struck me.  First was the assumption that I had a point, or an argument.  This is good, I guess, as it implies that more often than not, I might possess such things.

Yesterday was not one of those times, however.

I wrote that piece simply because "Kurvers for Niedermayer" has become part of Leaf lore and with each loss this season, the Kessel deal is being more often described in those terms.  Given that a significant amount of the membership here was probably less than five years old at the time, I thought it would be worthwhile to spell out just how that all played out, not because I wanted do draw comparisons, but to allow everyone else to make their own.  I also write a post on this every 2-3 years as a kind of catharsis.

I do have some opinions, though.  I hinted at them yesterday but didn't go into them primarily because something came up and I ran out of time.

Really, I think the comparisons begin and end with the fact that both teams had lousy starts in a season where they don't have a first-rounder.  You could make a case for goaltending injuries and the loss of a puck-moving defenseman, but I don't think those have fully played out this year yet.  The comparisons will either be there or not based on what Burke does and whether it works any better this time out.

I always accused Smith of panicking.  The file where I keep those dates and trades is titled "floyd_smith_goes_nuts.txt."  Each time I look at it, though, I cut him a little more slack.  It helps that periodically I learn things.  A day or two ago was the first time I ever saw that Fergus' abdominal surgery was in November, 1990.  Suddenly I had a context for the first series of trades.

The Ellett trade was terrible - not so much because of Ellett, who I came to quite like, but because Smith traded 2/3 of his top line and didn't get a scorer back.  I don't think anyone ever believed that Paul Fenton was a legit 30-goal guy.  Smith got his puck mover but eliminated the people he'd move the puck to.  When Leeman was injured that same night (certainly not Smith's fault by emblematic of how that season went), the result was that the entire Olczyk-Leeman-Osborne line was gone in the span of a day and what little offense there was basically up and died.

The Iafrate trade was probably the best in terms of value for value.  Iafrate was the player I was saddest to see go, though in hindsight, he probably couldn't coexist with Leeman and he was most likely the one most desperately in need of a change of scenery.  He still could be a game-breaker, though, and Leeman's days as a player like that were done.  (Calgary thought otherwise.)

My biggest complaint (and this is why every trade listed the ages of the players involved) was that Smith took a very young talented team and made it a significantly older team built mainly of checkers.  This wasn't bad in every case.  The Krushelnyski deal was probably a wash, even with almost a 10-year age difference in the players.  Not all of Toronto's young guys worked out elsewhere.  Pearson, for example, was basically an energy guy who popped 19 goals once in his life.  Neither of the second-rounders amounted to much and Petit was actually pretty useful.  For all that, you still had a 20-year-old and two high picks going to Quebec for a mid-range defenseman and two guys who were 30+.

Lucien DeBlois was one of those guys.  He'd been a pretty good scorer in the late '70s and early '80s, but by 1990 his lot in life was to be a guy who'd chip in 9-10 goals per season and basically not do anything stupid.  This isn't a bad thing - Tom Watt loved him because you could trust him out there.  It's just that his days as a skill guy and a scoring threat were long, long gone.  His value was on the third line.

For most players I saw, I've got some memory of them - a sense of what they were all about or a particular image of a play, a goal, a hit, whatever.  For Lucien DeBlois, I've got nothing.  I wouldn't even know that Tom Watt loved him if not for an interview I heard between Watters and Mark Osborne (for whom he was traded).  It's almost like watching Wallin out there.  It's not clear just how much he'll create but coaches love him because he's responsible and doesn't make glaring errors.

So was it a mistake to get him?  Hard to say.  Deploying players like him and Aaron Broten changed the kind of team the Leafs were and when they were playing, some kid wasn't.  At the same time, the remaining kids by that time were either damaged, slumping or not ready, so I can't name a player whose spot they were taking.  He was more representative of what was happening with that team in a season that went to pieces, which really began with injuries, and I blamed Smith for all of that for a long time - probably unfairly.

the HHOF take on Lucien:

"Lucien DeBlois was one of the top junior Canadian hockey stars of the mid 1970s so it was no surprise when he was selected eighth overall by the New York Rangers in the 1977 NHL Amateur Draft.

DeBlois had a four-year major junior career with the Sorel Black Hawks of the QMJHL. As a 16-year-old, he played in 56 games, scoring 30 goals and 35 assists for 65 points in 1973-74. He followed that up the next year with 46 goals and 53 assists for 99 points in 72 games. Playing in 70 games in 1975-76, DeBlois poured in 56 goals while picking up 55 assists for a 111-point season. By now he had caught the attention of many professional scouts. In his final junior year, DeBlois was ever bit as dominant an offensive performer as he'd been the previous years. He again collected 56 goals and increased his assists total to 78, giving him an impressive 131 points for the year.

Despite also being selected in the first round, ninth overall by the Quebec Nordiques of the WHA, DeBlois had always dreamed of playing in the NHL. He suited up for 71 games with the Rangers and scored 22 goals and eight assists for a 30-point rookie campaign.

After a disappointing offensive sophomore year, which saw him score just six goals for the Rangers, he was sent to the Colorado Rockies early in the 1979-80 season. He had seasons with 24 and 26 goals on a very bad team.

The year 1981 began a three-year stint with the Winnipeg Jets. During the 1983-84 season, DeBlois registered his best offensive season in the league, scoring 34 times while assisting on 45 others for a 79-point total in a full 80-game season.

DeBlois joined his fourth NHL team in the fall of 1984, signing with the Montreal Canadiens. He remained there for two seasons and helped the Habs to victory over the Calgary Flames in the 1986 Stanley Cup championship.

The next stop for DeBlois was a second tour of duty with the New York Rangers, the club that drafted him nine years earlier. This time around DeBlois had legitimate playing time, playing in more than 70 games in two of the three seasons. But by now it was evident that his offensive skills were eroding. He managed to score just 18 goals in 147 games.

DeBlois then played for a little more than a season with the Nordiques, the other team that drafted him while they were an organization in the now-defunct WHA. In his single full season with Quebec, DeBlois scored nine goals and added eight assists.

Early in the 1990-91 season he was shipped to the Toronto Maple Leafs, one of the league's worst teams at the time. DeBlois got off to a quick start, scoring ten goals and 12 assists in 38 games. However, he could only muster eight goals after 58 games the following season before being shipped back to Winnipeg late in early 1992. His NHL career would come to an end following a short eleven-game stint in Manitoba.

DeBlois retired having played in 993 NHL games, scoring 249 goals and 276 assists for 525 points and one Stanley Cup ring. DeBlois is now a pro scout with the Anaheim Mighty Ducks." 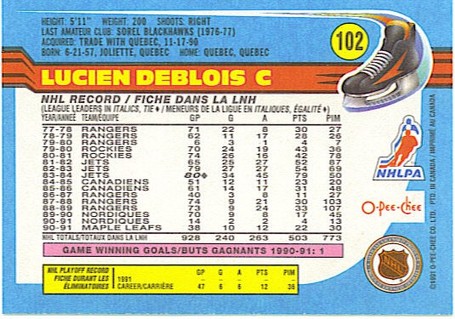