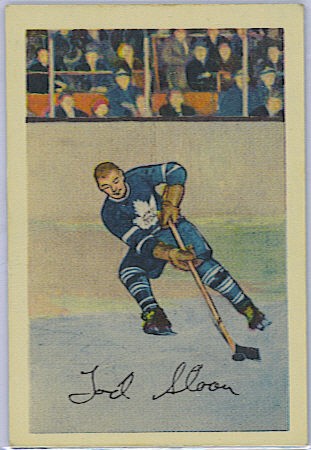 Wasn't getting a ton of inspiration from either this week's news or the coming game this Saturday, so I'll indulge in one of the other pastimes of the LotD - Leafs who you might not know but probably should.

Once dubbed by Conn Smythe as the best junior prospect he'd ever seen, Tod was one of a number of young Leafs that came to the club from the Nickel Belt (others included Tim Horton and George Armstrong).

Save for his size, which was a bit on the small side, Tod was the sort of player who'd fit the Burke model to a T.  He could score (four top-10 finishes in goals, once as high as third, three top-ten finishes in points, as high as fifth), give a hit, take a hit and wasn't afraid to mix it up.  He topped 100 penalty minutes three times and was in the top-ten for penalties four times.

A dressing-room leader, Tod also wore the 'A' for a number of years.  He only made the NHL All-Star team once, mainly because when he played right wing, he was behind a couple of guys named Howe and Richard.  As a centre in 1955-56, he scored 37 goals (behind only Beliveau, Howe and Richard) and made the second team.

Tod's Leaf career mainly spanned the bridge years between the end of the 1940s dynasty years and the resurgence of the late 1950s.  Most of those teams have been basically forgotten as they lacked championships and were marked by a series of rebuilds.  Tod stayed through most of them alongside players like Jim Thomson, Harry Lumley and Sid Smith.

In the late 1950s, he joined a number of NHL players who were dumped to the Chicago Black Hawks (as they were then spelled) for the sin of contemplating a players' union.  Tod responded with another pair of 20-goal seasons for Chicago and won a Stanley Cup with them in his last season, 1960-61.  Something about getting the last laugh....

After he retired, the number 9 he wore in Chicago went to a rising star named Bobby Hull.

Tod's best Leaf moment might have come in his first full season.  Everyone remembers the Bill Barilko goal in overtime in Game 5.  What is often forgotten is that the only reason that game even got to overtime was that Tod Sloan scored in the dying seconds of regulation with the goalie out.  His heroics set up Bill's heroics.

A name worth knowing, anyway. 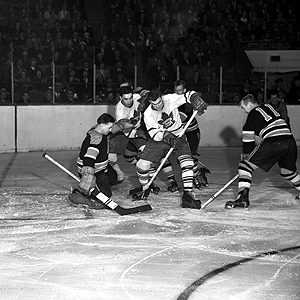 (Sloan and Armstrong in action vs Boston - via www.legendsofhockey.net )

the HHOF take on Tod:

"Known as a tough forward who could give and take a check with the best of them, Tod Sloan began his junior career in the OHA with the St. Michaels Majors in 1944 where he helped lead the team to the Memorial Cup in his first two seasons. The 1945-46 season saw him lead the league in goals, assists, and points, and he moved up to the AHL the next year with the Pittsburgh Hornets.

The Toronto Maple Leafs came calling the next year, but Sloan played olny one game for the Leafs in 1947-48, returning to Pittsburgh after. The next season, he appeared in 29 games in Toronto but spent most of it with the Hornets. The 1949-50 season was spent entirely in the AHL with the Cleveland Barons and saw him lead the playoffs in goals and points.

It was on his third try to crack the Leafs' lineup in 1950-51 that he succeeded. In his rookie year, Sloan played in his first All-Star Game and saw his first action in the Stanley Cup playoffs. He scored a huge goal for the Leafs in game five of the finals against the Canadiens. It was the third period, with the Leafs down by a goal, when Sloan scored the tying marker with 32 seconds left, setting up the overtime heroics of Bill Barilko and giving the Leafs the Cup, Sloan's first.

In 1957, Sloan and other players attempted to create a players association, only to be punished by the Leafs who traded him to the Blackhawks for cash in 1958. After three seasons with the Hawks, he won his second Stanley Cup in 1961 and left the NHL to play in the OHA for one year and represent Canada at the IIHF World and European Championships. He retired in 1962." 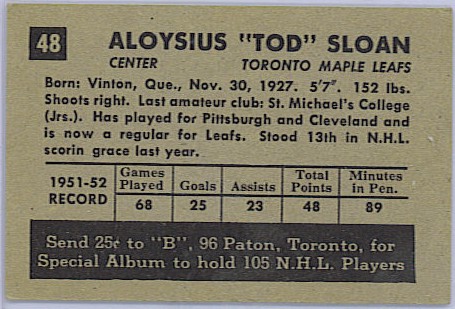