Editor's Note: This is the most important LotD ever. 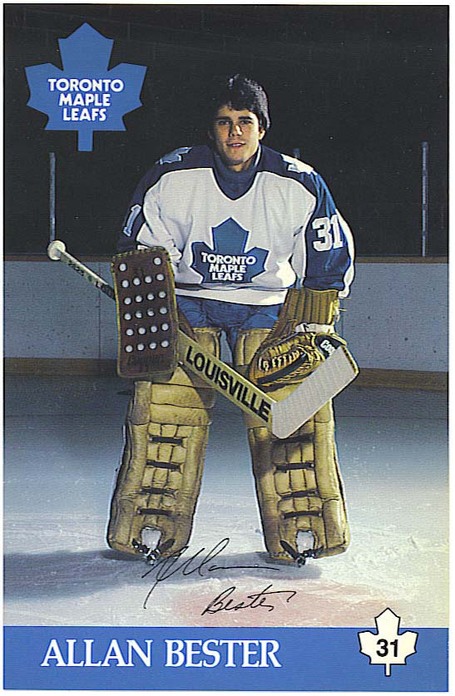 (Allan Bester - looking not even 20 because he he probably wasn't - via img7.imageshack.us )

Between the Wregget post last week and the 90-91 post of a couple days later, I've already talked quite a bit about Allan Bester.  Suffice it to say that I liked the guy.

He'd been a great little goalie as a 19-year-old in 1983-84, putting up an .883 save percentage while facing over 37 shots per game.  His '84-85 numbers weren't that bad, but the team was, and Bester would spend much of this season and almost all of the next one in the minors while the Leafs would experiment with Wregget, Rick St. Croix, Tim Bernhardt and Donnie Edwards.  Sort of like the past couple of years, new saviours would arrive every year or so, get slaughtered behind a horrific Leaf defense and be buried in the minors or out of hockey shortly thereafter.  Bester looked set to join this group.

He did make it back, though.  In 1986-87, he posted a 3.65 GAA and a pair of shutouts, unheard-of performance for a Toronto goaltender.  The shutouts just left us in awe.  A team not scoring a single goal against Toronto was one of those events we'd sort of imagined existing in the realm of possibility but couldn't really imagine it ever happening.  And Bester did it twice.  TWICE!  (Once, I think, was a 0-0 draw with Minnesota's Kari Takko - in '80s hockey, that's supposed to be an impossibility.)

It's more than a little scary right now to think that pretty much the entire hope for the season now rests with a goalie with less than 100 NHL minutes to his credit.  The whole thing has a real '80s kind of vibe to it.  The time is coming when those of us that saw the whole Ballard thing happen live won't be able to lord it over those who didn't, because you're getting a pretty good look at it now.

The Bester tribute on youtube.  More rubber than a dead skunk on the Trans-Canada highway.  Nice save on Gilmour, too.  Man, I hated that guy....

the HHOF take on Allan:

"Diminutive netminder Allan Bester spent parts of eleven years in the NHL. He made up for his lack of size with quick reflexes and self-assured attitude between the pipes.

The native of Hamilton, Ontario starred in the OHL with the Brantford Alexanders. After posting 29 wins and a 3.51 goals against average in 1982-83, he was chosen 49th overall by the Toronto Maple Leafs at the Entry Draft. He was also recognized by the OHL when he was named to the first all-star team. While he was still in junior, the youngster was summoned to the Leafs halfway through the 1983-84 season. He guarded the net admirably and, at times, spectacularly on the defensively horrid club. Bester's eleven wins and 4.35 goals against mark were quite impressive considering the calibre of play in front of him.

Bester spent his second and third pro seasons mostly in the AHL working on the nuances of his game. He played more in 1986-87 and 1987-88 but was always supplanted by Ken Wregget in the post-season. Bester won 17 games for Toronto in 1989 and won 20 games the following year when the club reached the .500 mark for the first time in over a decade. By this time, Bester's penchant for allowing goals through his legs was giving him a bad name. The most glaring moment came in the crucial third game of the 1990 Norris Division semi-final when St. Louis forward Sergio Momesso put a long shot between Bester's legs during overtime.

During the 1990-91 season, Bester was traded to the Detroit Red Wings but was chiefly a farm hand with his new club. In 1992 he was sensational when he led the Adirondack Red Wings to the Calder Cup. Following this triumph he was presented the Jack Butterfield trophy as the most valuable player in the post-season.

Bester remained in the minors through the mid-1990s then made an unexpected return to the NHL with the Dallas Stars in 1995-96. Ravaged by injuries throughout their roster, the Stars signed the veteran netminder to a temporary contract. Bester looked solid in ten appearances before returning to the minors. He retired in 1998 after finishing his third season with the Orlando Solar Bears of the "I"."