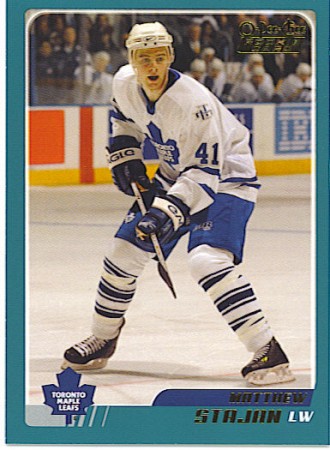 Well, last night the Leafs managed to do everything but win.  Details, details....

There was a lot to like in last night's game.  Kaberle was playing like we haven't seen since Cam Janssen re-arranged his noggin.  Stalberg made a bunch of great plays and showed a lot of speed.  I'll be making the unjustified and unfair Stalberg LotD comparison later.  The goals weren't really Toskala's fault, said coach Wilson, but of course, they were never really Peter Ing's fault either.  It's just that Grant Fuhr found a way to stop them.

Matt Stajan played a very good game as well and potted a couple of power play goals.  I don't know whether he's had a multi-goal NHL game before (if he has, he hasn't had many) and is now on pace for a 164-goal season, tied with Alexander Ovechkin (don't you love small sample sizes?  Tom Fergus was once on pace for 240 points after three games (5-4-9)).

Stajan's name comes up a lot when talking about players likely to be traded or the lack of a "true #1 centre."  I get that most teams like to have the prototypical big stud in the middle but it seems to me that you work with what you've got.  If you have big wingers who can skate and score and a smaller guy in the middle who can dish and be the defensive conscience, that's something that can work (see "Kid Line, the" and "Primeau, Joe").  Last year, they tried it and all Stajan did was come up with a career high in assists.  It worked pretty well for both wingers, too.  Worst case, you go 1 and 1A with Mickey Grabs and see what you have.

I've seen someone make the comparison in the past couple of days with the career track of Brendan Morrison.  Too early to say whether that's wishful thinking or not, but there's another example.

The Leafs get beat up a lot for their drafting record, but Stajan's one that came up nicely through the system and is on the verge of playing his 400th game as a Leaf.  He's actually now third in games played behind Kaberle and Ponikarovsky.  He'll hit 200 points in fairly short order as well.

A good start for Matt, anyway.  See where he takes it from here.

Somebody likes Matt.  Not sure about the taste in music:

The HHOF take on Matt:

"Matthew Stajan was born December 19, 1983 in Mississauga, Ontario. The second round, 57th overall selection of the Toronto Maple Leafs in the 2002 NHL Entry Draft, Stajan is a graduate of the OHL's Belleville Bulls.

Over the next pair of seasons Stajan would become one of the more responsible and consistent Maple Leafs. While the club struggled both on the ice, Stajan twice broke the 30-point mark and suited up for his 300th NHL game on March 4, 2008." 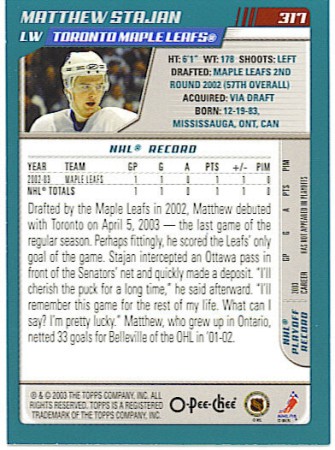