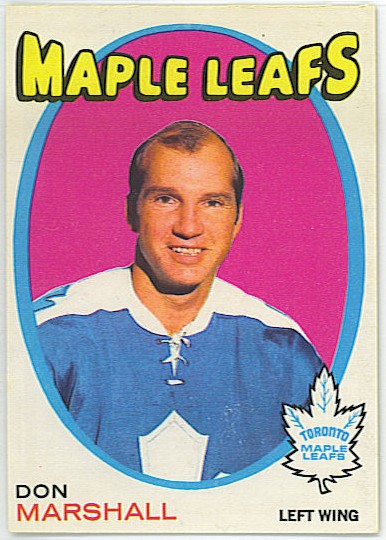 The thing I like best about LeafsTV (which I still don't have) is the old games that they show.  It's not so much a Leafs/Thrashers game from three seasons ago as it is the really old stuff from the 60s and even the 50s, when they have that sort of thing on.  The attraction for me is the opportunity to watch players I never got to see.

For most star players of days gone by there is a highlight package out there on youtube somewhere.  I find, though, that it's just so much better to watch a complete game - to see the little plays that don't make the highlight reels.  I like to watch Tim Horton clear the zone.  I like the speed of a Dick Duff as he goes wide on a defenseman.  I like Terry Sawchuk in the gorilla pose in the nets.

Just as much, though, I like to see the opposition.  These games are how I've gotten to see Howe, Hull, Orr, Beliveau.  So if I'm asking someone to tape a game for me, I pick it based mainly on the opposition.

Last night I got a new tape and it looks like a dandy.  There's the Leafs/Rangers game from 1971 where Bernie Parent's mask got pitched into the stands, and then there's the real gem - Game 2 of the 1960 Final, Leafs vs. Habs - the first game I've ever seen with the Rocket.

I got to watch the first period of this second game last night.  Habs got a pair early and then settled back and clogged it up.  Neither team got anything done on the power play and it looked like it would end 2-0 until the Leafs' Larry Regan potted one in the last minute.

Don Marshall certainly isn't a name you'd immediately associate the with the Leafs.  He was a checker and penalty killer on the great Hab teams of the 1950s, a better two-way guy with the Rangers of the 60s, putting enough points on the board in '66-67 to the the second-team all-star at LW, an original Sabre for one season and finally a one-year source of veteran help to the 1971-72 Leafs, a promising team that was mostly undone by the WHA.

I don't think he saw a lot of ice as a Leaf, registering only 2 goals and 14 assists.  He was a plus, though, which is pretty good for a defensive guy who isn't scoring much.

Anyhow, Don's tenure in Toronto was fairly uneventful and doesn't leave a lot of room for storytelling, but he's a nice way to let me talk about this neat tape.

Today's moral: watch your old games on LeafsTV.  Odds are the Leafs play well and might even win, and if they don't, the game is shown because the opposition does something interesting and that's worth seeing, too.  Even the Habs.

A point of discussion:  Could players from this earlier era hold their own against today's teams?  Personally, I think that if you were to match up the equipment, it might be closer than you think.  A lot would come down to the standard of officiating.

the HHOF take on Don:

"Like so many athletically-minded lads, Don Marshall devoted parts of his entire year to playing football, baseball, and hockey. But within the culture of his native Verdun, hockey was clearly the sport of choice for most and Marshall, with his natural, fluid skating style, was no exception.

During his junior days with the Montreal Jr. Canadiens of the QJHL, he performed as an offensively-minded forward with a nose for the opponent's net. When he turned pro in 1952, he kept up the same tradition in the minors while skating for the Cincinnati Mohawks of the IHL, the Buffalo Bisons of the AHL, and the Montreal Royals of the QHL.

Midway into the 1954-55 campaign, the Canadiens summoned him to join their ranks. The problem the winger faced, however, was that the Habs were already thoroughly stocked with offensively skilled forwards. As such, Marshall's new role would be defensive in nature, an assignment he disliked although he never complained openly.

Instead, he toiled quietly, polishing his defensive tactics to the extent that he became one of the league's premier penalty killers. As payment for his adaptation, he enjoyed a record five-straight Stanley Cup victories between 1956 and 1960.

By 1963, however, the Canadiens had lost their championship touch. In an effort to shake things up, they packaged Marshall with Jacques Plante and Phil Goyette to acquire Gump Worsley among others from the New York Rangers.

In the Big Apple, Marshall initially felt out of place but quickly began to appreciate his new opportunity to assume a more offensive role with the club. In the process, it was evident that, thanks to the strong defensive skills he had developed in Montreal, he was an excellent two-way player.

In all, Marshall put in seven seasons with the Blueshirts and enjoyed his most prolific offensive phase. In 1965-66, he netted a personal-best 26 goals and 28 assists within the context of some very solid defensive play.

At the start of his third decade in the NHL, Marshall was claimed by the Buffalo Sabres in the Expansion Draft of 1970. His new role with the fledgling club was to provide some veteran leadership for the younger recruits. He did all of that and then some. Although the team struggled defensively, he managed to pot goals as though still in his prime.

In spite of his contribution, the aging winger was left up for grabs in the Intra-League Draft of 1971. The Leafs took advantage by bringing him to the Gardens for one final season. During his last run, he performed as a steady, reliable veteran who had the versatility to plug holes and provide a calming influence on the sometimes rattled atmosphere on Carleton St. At the close of the season, Marshall packed it in for good." 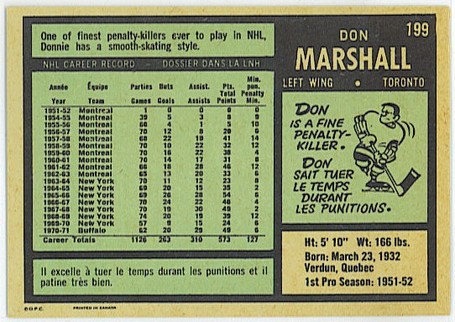