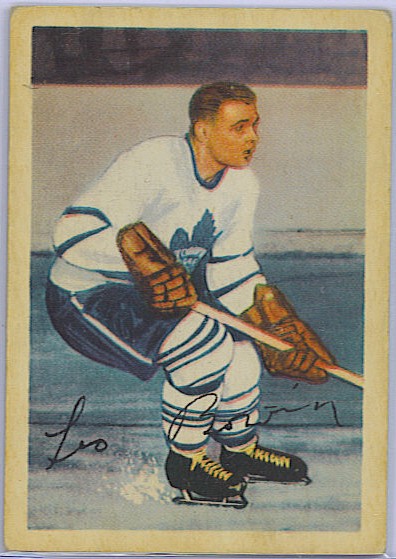 I'm glad we got to talk a little bit about old-timers yesterday because it gives me an excuse to have Leo Boivin as the LotD.  Leo is in the Hall of Fame mainly (well, entirely) for his work as a Bruin, so he's not really a good luck charm for Bruin games.

Leo Boivin is a Hall of Fame defenseman.  He broke into the league in 1952 and established himself as a very heavy hitter who was also an excellent defender.  Tim Horton called him the toughest player in the game to beat one-on-one.  He played over 1100 games in a career that ended in 1970.  He captained the Bruins and (believe the HHOF or not for this one) was considered by many to be the link between Shore and Orr amongst great Bruin defenders (obviously offense not included).

Could he have played today?

The thing with Boivin is that he was short then, too.  If you look at the '53-54 Leaf team, he's the shortest defenseman by a full two inches.  The tallest is oft-injured Hugh Bolton at 6'3".  The rest are all 5'10" to 5'11".  Interestingly, the Leafs had eight players that were six feet or better, and all but Bolton and goalie Harry Lumley were forwards.  It's not like he never faced big forwards, either.  Beliveau was 6'3", Bill Hay of the Hawks lists as 6'3" at hockeyreference, but I thought he was taller.  They were out there.

Watching those older games, people were expected to skate.  You didn't run the gauntlet of sticks the same way.  As such, you had to be able to move and as a defenseman, get your body in the way.  Presumably, if you were mobile and shaped like a brick (low centres of gravity aren't a bad thing if you like to hit) you could go out there and play a very effective game.

That's a different time, however.  Today, that same brick-shaped person likely becomes an "energy guy" forward (see Mitchell, Dale).  I can't say whether he could play defense because I doubt anyone would let him.  He doesn't fit the model.

the HHOF take on Leo:

"Leo Boivin began playing hockey at the age of seven on the rivers and outdoor ice surfaces of Prescott, Ontario, near Ottawa. As a youngster he knew that he wanted to be a defenceman "because defensemen got to stay on the ice longer, got to play more."

Boivin's junior career began in 1948-49 as a member of the Inkerman Rockets and lasted two more seasons as a member of the Port Arthur Bruins. Boivin's teams competed in the Memorial Cup playdowns in all three of his years in junior. While Boivin was still a teenager, his playing rights were traded by the Boston Bruins to the Toronto Maple Leafs. He began his professional career as a member of the 1951-52 American Hockey League champion Pittsburgh Hornets but was called up to the Leafs for a two-game tryout late in the 1951-52 season, making his National Hockey League debut on March 8, 1952.

Boivin landed a starting job with the Leafs in 1952-53 and played with Toronto until being traded back to the Bruins early in the 1954-55 season. It was with the Bruins that Boivin's reputation as a hard-hitting, stay-at-home defenceman grew. Tim Horton considered him to be the toughest blueliner to beat in a one-on-one situation and some Bruin historians refer to him as the link between Eddie Shore and Bobby Orr. Boivin was captain of the Bruins during four of his 12 years with the club and he played in the NHL All-Star game during the 1961, 1962 and 1964 seasons. His Bruin teammates called him "Billy Boy Boivin" for no other reason than the alliteration had a nice ring to it.

A trade to Detroit mid-way through the 1965-66 season provided Boivin with his last chance at a Stanley Cup, but it was not to be. Detroit lost the final series to the defending champion Canadiens four games to two.

Boivin was selected by the Pittsburgh Penguins in the 1967 Expansion Draft, returning to the city where he began his professional hockey career 16 years earlier. The Penguins traded him to the Minnesota North Stars mid-way through the 1968-69 season and Boivin played one more year for the North Stars before retiring at the end of the 1969-70 campaign.

After retiring, Boivin stayed in the game as a scout. He went behind the bench as the interim coach of the St. Louis Blues during the 1975-76 and 1977-78 seasons, and coached the Ottawa 67's of the Ontario Hockey League for a time but ultimately he preferred scouting to coaching.

Also nicknamed "Fireplug" for his compact stature and devastating body checks, Leo Boivin was inducted into the Hockey Hall of Fame in 1986" 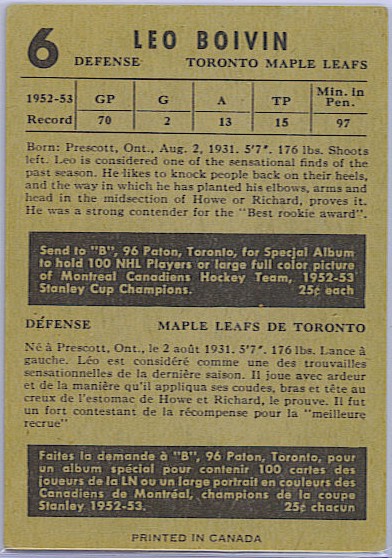