Share All sharing options for: Frank "the Animal" Bialowas 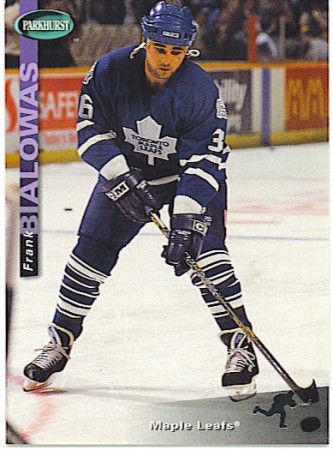 Frank "the Animal" Bialowas was a minor-league fighter who got into three games with the Leafs in 1993-94.  He had no points and 12 penalty minutes, though I can't say whether that was from six minors, two fights and a minor, or a two and ten.

I do remember him mainly because of two things: One - any player nicknamed "the Animal" is basically memorable for that alone, even if they never do another thing.  Two - he's the only player I ever heard readily admit that he'd tried steroids.  He claimed that he got off them because as a hockey player, bulk didn't really help.

Well, that has a lot to do with the hockey card world of 1994-95.  If you recall, there were approximately eleventy bazillion different card sets that year, and with Upper Deck owning the high end and Pro Set owning the low end, that left eleventy bazillion minus two companies fighting it out somewhere in the middle.

Parkhurst was basically the Oldsmobile of the card world - a generally pleasant, mostly competent but basically undistinguished product trading mainly on an old, well-known brand name.  They hit on the notion that they should be the set to collect for rookies.  If they had all the rookie cards, they'd be the set to get, right?  So this meant that every carbon-based life form who saw at least one NHL warm-up got a card produced.  The Leafs from that year included such luminaries as Bialowas, Chris Govedaris and Eric LaCroix (who at least had an NHL career).

Unfortunately, to make space for all these guys nobody ever heard from again, they had to leave out guys who actually played.  Sorry about your luck, Jamie Macoun.  (Sorry, too, to Rouse and Lefebvre, but they both were gone anyway.  No Damien Rhodes, either.  Only 9 of 13 cards printed could be considered regulars.)

Frank didn't play another NHL game, but he did go on to be the Leaf of the Day. 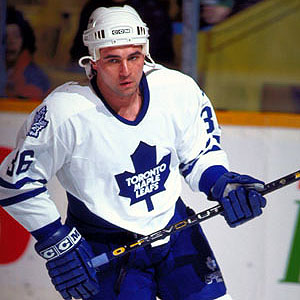 (Note - the card says 4 games, as does hockeydb.com.  The HHOF says three games.  Either way, somebody is out by a HUGE percentage.)

The HHOF take on Frank:

"Frank Bialowas played his minor-league hockey in the Manitoba Junior Hockey League with the Estevan Bruins and the Winkler Flyers. Bialowas has always played an aggressive style when on the ice and he earned the nickname "Animal" from his fellow players. At 6'0" and 235 pounds, Bialowas certainly had the size to take on all-comers.

In 1991-92 Bialowas turned pro with the Roanoke Valley Rebels of the ECHL. In his second year in the league he suited up with the Richmond Renegades, where he most noticeable statistic was his 261 minutes in penalties. In 1992-93 he moved up to the AHL with the St. John's Maple Leafs in the latter part of the season and was with them for the entire 1993-94 season when he once again piled up the penalty minutes, leading the club with 352. It was his extremely aggressive, rugged, colourful style of play which earned him a three-game call-up by the Toronto Maple Leafs. He failed to record a point, but true to form, did manage to find a seat in the penalty box for 12 minutes. Although his role of enforcer may not have been the most glamorous in hockey, it was a style of play Bialowas loved

Bialowas played another five years in the AHL and often seemed to enjoy himself the most when playing for the Philadelphia Phantoms. Although it was not the Flyers, Bialowas said he loved the city and said the aura of the famed Broad Street Bullies often carried over into the mindset of his game, and he had the penalty minutes to prove it. He became somewhat of a cult figure to the loyal fans of the Phantoms, who relished his many scuffles with opponents. He retired after the 1999-2000 season as a member of the Hershey Bears. " 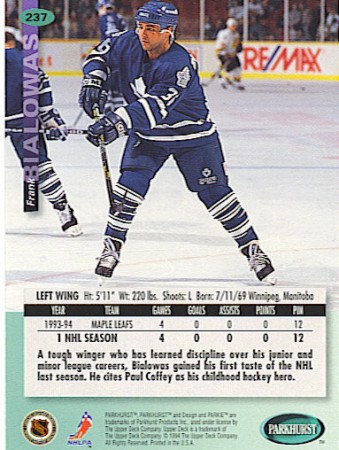