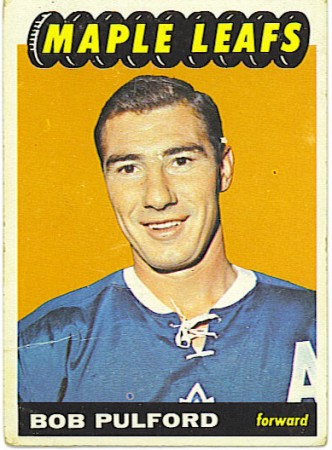 When Leaf teams were great, they were made up of players who put winning ahead of any personal stats or gains, players who would do the little things, the less glamourous things that didn't always show up in the game summaries but led to results in the win column.  The Teeder Kennedy video I posted this morning talks about probably the best embodiment of that.

Bob Pulford is another example.  In 14 years of Leaf service, his job was to go up against whoever the best forwards were on the other side and make sure they had a lousy night.  He could skate, he had pretty good size, he could hit and check and grind it out.  At the same time, if you were in a spot and needed a goal, Pulford could do that too.  He normally was good for about 20 in any given season but was one of those players you could count on in November or any other time it mattered.

Much like a Gainey who came after him (though I think Pulford was better), he was the sort of player who had the respect of both those he played with (he wore the 'A' for years in Toronto) and those he played against.  This quote is also in the HHOF blurb below but I wanted to highlight it - who better to describe Bob than one of the best who tried to beat him?

"Pulford is one of my private headaches," said Gordie Howe, "because he has to be classed as one of hockey's greatest forecheckers. There's a deep knowledge of the game in his forechecking, hook, poke check, strength of arms, quickness, the whole bundle of wax."

From Joe Pelletier's bio on Pulford:

Legendary Montreal coach Toe Blake was once asked who he would pick from the Toronto team if he could. Toe didn't pick Frank Mahovlich, Dave Keon or Tim Horton, but he chose Bob, and when asked why, his simple explanation was, "He's the heart of that hockey club."

While Bob was never an all-star or an award winner (though if the Selke had existed in those days, he'd have won a few of those), he was nonetheless one of the key cogs in the Leaf machine and exemplified the sort of lunchpail, team-first game they could work to perfection (and that today's team would do well to emulate).

This is probably Bob's most famous Leaf moment below, beating Rogie Vachon in double OT.  Lots of good stuff in this clip - watch Keon skate and Stanley hit...

More on Bob from the HHOF.

-  Traded to Los Angeles by Toronto for Garry Monahan and Brian Murphy, September 3, 1970.

The HHOF take on Bob:

"Bob Pulford was raised in suburban Toronto and spent his formative hockey career in the Toronto Maple Leafs organization. He was an All-Star with the Weston Dukes of the Ontario Hockey Association Junior B League in 1952-53 before moving up to play Junior A with the Toronto Marlboros. There he was coached by Toronto legend Turk Broda, and proved to be a pivotal performer in Toronto's back-to-back Memorial Cup championships of 1955 and 1956.

Pulford was promoted to the Leafs for the 1956-57 season and proved to be a hard- working, two-way player who excelled at checking the game's top scorers. "Pulford is one of my private headaches," said Gordie Howe, "because he has to be classed as one of hockey's greatest forecheckers. There's a deep knowledge of the game in his forechecking, hook, poke check, strength of arms, quickness, the whole bundle of wax."

He played with Toronto for 14 seasons and won four Stanley Cups with the Leafs during that time. Pulford scored one of the more important goals in Leafs history when he beat Rogie Vachon at 8:26 of the second overtime period to give the Leafs a 3-2 win over Montreal in game three of the 1967 finals. The Maple Leafs traded him to Los Angeles in 1970 and it was as a King that he finished his playing career, in 1972.

Pulford had graduated with a Bachelor of Arts degree in 1964 after seven years of night school and had prepared well for the days when his playing career would be over. He stepped behind the Kings bench after retiring and guided them for five years before being named coach and general manager of the Chicago Black Hawks in 1977, eventually working his way up to the position of senior vice-president with the club.

Although he could have been inducted into the Hockey Hall of Fame for his quarter of a century as a Black Hawks' executive, Bob Pulford was inducted, in 1991, in the Player's category." 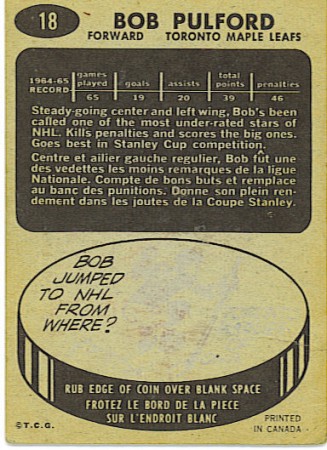 (don't scratch the monitor - it won't help - via img39.imageshack.us )