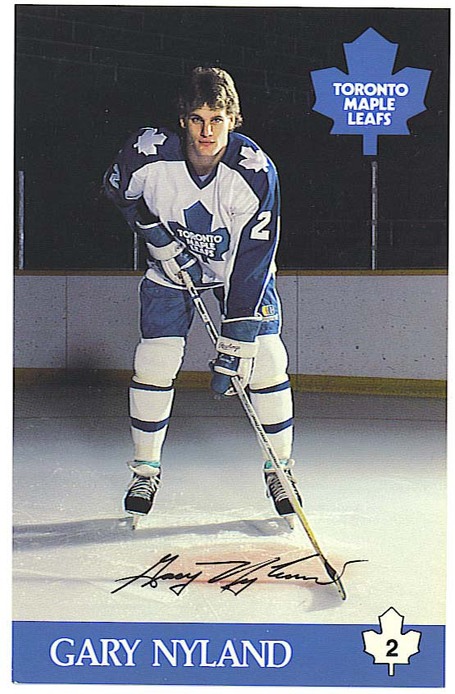 (Leafs loved Gary, but not enough to spell his name correctly - via img3.imageshack.us )

Imagine if you could take Luke Schenn and make him two inches taller, give him a bit more truculence and maybe a touch more offense (but just a touch).

That was Gary Nylund.

Back when the Leafs drafted Schenn, I saw the Nylund comparison more than once.  It always brought about a ton of nasty replies, mainly from people who were born well after Nylund was a Leaf pick and never saw him play, people who had no idea just what kind of junior he was and simply assumed that any 80's Leaf defenseman had to be a disaster.

Nylund wasn't any of those things.  He was a great pick.  He was just really, really unlucky.

Gary Nylund was a consensus top-3 pick in 1982.  He had it all - size, mobility, toughness.  Like Schenn, he was seen as NHL-ready and could step right in.  He was captain material.  The Leafs were lucky, drafting third, that Minnesota went for Brian Bellows and they jumped all over Nylund.  He signed the biggest rookie deal the Leafs had ever had and looked really sharp in his first training camp.

Nylund got hit by Wilf Paiement in a preseason game against Quebec and tore the ACL in his left knee.  He missed half the season.  Rather than send him to junior, the Leafs kept him up and after just 16 games, he did it again.  Same ligament, same knee.  It would be 30 games into his next season before Gary saw the ice again.

The injuries slowed his progress a lot.  Playing on some horrific Leaf defenses did the rest, and Gary developed into a solid role-player, but not the impact defenseman the Leafs had hoped for.

As was common with anyone the Leafs hoped would do anything, Gary got it pretty good from Harold Ballard in the press.  When the Chicago Black Hawks came calling in the summer of 1986, he jumped.  (I heard a story that there was also an offer from the Oilers, but the Hawks had more money.  Not sure he picked wisely, if so.)

Of course, to Ballard, once Nylund was actually gone, he was suddenly the great prospect again rather than the guy Ballard dumped on all the time.  In the arbitration hearing, Harold demanded young phenom Ed Oclzyk as compensation.  The judge laughed and chose the Hawk proposal of Ken Yaremchuk, Jerome Dupont and a fourth instead (compensation in those days was an either/or decision based on competing proposals by each club).

Nylund, to me, has always been the great cautionary tale about bringing up a junior too soon.  Antropov would be another case, I guess, though he was able to rebound better.  Two of the top three picks from 1982 ended up derailed by knee injuries.  The number one selection that year was Gord Kluzak.

Nylund went on to be a firefighter out in BC.  He was decorated for bravery a few years back.

This is the clip I always show for Gary Nylund.  There are a couple of others, but they're scraps as well, grainier and less interesting than this one.  Gary beats a hair-pulling Bob Probert over the head with his own helmet:

1984-85 tidbit:  Wayne Gretzky would have won the Art Ross without scoring a single goal.  His 135 assists matched the entire point total of Art Ross runner-up Jari Kurri.  (OK, he really needed one goal for the Ross because he'd have lost the tie-break to Kurri if he had no goals.  Still.)

The HHOF take on Gary:

"Gary Nylund appeared to be the complete package on defence when he joined the NHL in 1982. The 6'4" hulk was a punishing hitter whose mobility and passing ability far exceeded most big men in the game. A knee injury suffered as a rookie curtailed his development and he ended up being a solid role player in eleven NHL seasons rather than a star.

The native of Surrey, British Columbia played in the BCJHL with the Delta Islanders before joining the WHL's Portland Winter Hawks. In 1981-82, he registered 59 assists, was placed on the league's first all-star team, and helped Portland reach the Memorial Cup tournament. Although the Kitchener Rangers won the Cup, Nylund was placed on the tournament all-star team. That year he was a key figure when Canada won its first-ever-gold medal at the World Junior Championships in 1982. The talented prospect was chosen 3rd overall by the Toronto Maple Leafs at the Entry Draft after only Gord Kluzak and Brian Bellows.

Nylund was off to a fine start as a rookie in the 1982-83 pre-season but twisted his knee when he checked Quebec's Wilf Paiement and was able to play only a few games in mid-season. After re-injuring his knee, Nylund remained on the sidelines for the rest of the year and did not return until the 1983-84 schedule was over 30 games old. The youngster showed glimpses of returning to form but he never rose to the top three on the fairly weak Toronto defence. Nylund played 79 games in 1985-86 and doled out several punishing bodychecks when the Maple Leafs came within one game of the semi-finals.

In the off-season, Nylund signed with the Chicago Black Hawks as a restricted free agent and helped solidify their blueline for nearly three years. He scored a career-high 27 points in 1986-87 and fit in well on the deeper Hawks defense corps. In November 1988 he was traded to the New York Islanders and was a solid performer there until he retired early in the 1992-93 season." 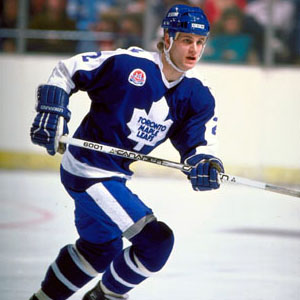