Share All sharing options for: Anders Hedberg - Smile, everyone! 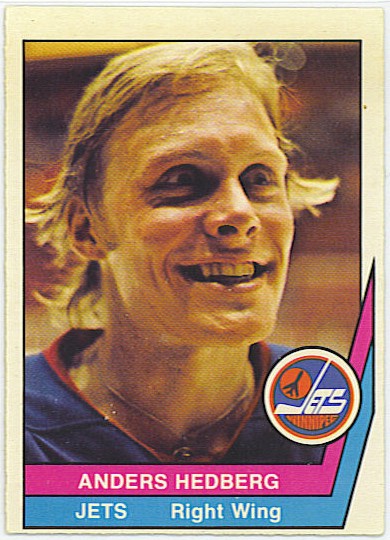 Former Leafs European scout Anders Hedberg captures the feeling of Leafs RAUP (Random Assortment of Unrelated Parties) this morning.  Good on you, Anders.  When you score 70 goals, nobody can tell you how to smile.  :)

It's hard not to wonder a little bit just how history would have played out had Hedberg ended up with the GM title like he wanted in the late 90s.  He'd headed up the Leafs' European scouting efforts and I believe it was at his behest that the Leafs surprised everyone with the pick of Nik Antropov in 1998.  It's not the same category of "what if" as if it had been the time of the JFJ hiring, but it's possible that by avoiding the whole Smith/Dryden/Quinn showdown maybe things play out differently.

Hedberg was really a tremendous player.  I don't think he fully gets his due because his biggest years were all in the WHA, and in the NHL-centric hockey world, that's always discounted.  All the same, in the mid-1970s there were very few lines in hockey that could have played with Hull-Nilsson-Hedberg.

When Anders did come to the NHL, his scoring went down.  Part of this is the greater depth of talent in the NHL, but just as much, in my view, came from the loss of Hull (who didn't come over) and Nilsson (who was always injured).  Hedberg emerged as an excellent two-way player who was always near the team lead in scoring.  He won the '84-85 Masterton as a gesture for a great career.

Plus he found Antropov and had an interesting smile.  Not much more you could ask for.

Anders scoring a goal.  I like this clip because it's one of the few that prove the existence of the old Calgary Cowboys:

The HHOF take on Anders:

"In 1969 the head coach of the Swedish national team invited a 17-year-old named Anders Hedberg to join the national team, but his studies prevented him from accepting. Hedberg made his first appearance in the national lineup the following year and immediately proved he was a player with great talent. He was even nicknamed "the New Tumba" after 1950s Swedish hockey star Sven "Tumba" Johansson. Hedberg played 100 official games for Sweden.

One of Hedberg's most memorable goals was the third one he scored against Vladislav Tretiak in the 1976 Canada Cup tournament. On a perfect pass from defenseman Borje Salming, Hedberg went one on one with the Soviet goalkeeper and tied the score 3-3.

By this time, he had already left Stockholm's Djurgarden and joined the Winnipeg Jets in the newly formed World Hockey Association. In what was perhaps the happiest time in his sports career, Hedberg played with teammate Ulf Nilsson on the same line as the legendary Canadian hockey player Bobby Hull?a line that was then considered the best in the WHA. Hull often stated that he'd never had partners who had mastered the fine points of hockey as well as the two Swedes, Hedberg and Nilsson. Bobby Hull scored his 1,000th career goal while playing in the lineup with the two Scandinavians.

After the demise of the WHA, Hedberg played seven seasons with the New York Rangers for a total of 465 games in which he scored 172 goals. In a ceremony during the 1997 World Championship in Finland, Anders Hedberg and Tumba Johansson were among those inducted into the European Hockey Hall of Fame.

After completing his hockey career, Hedberg spent several years scouting for talented players in Europe for the Toronto Maple Leafs and was appointed assistant general manager of the team. In August 1999 Swedish newspapers reported that Hedberg had turned down an offer to continue as Toronto's scout. Back in Sweden, he will no doubt continue to play an active role in the world." 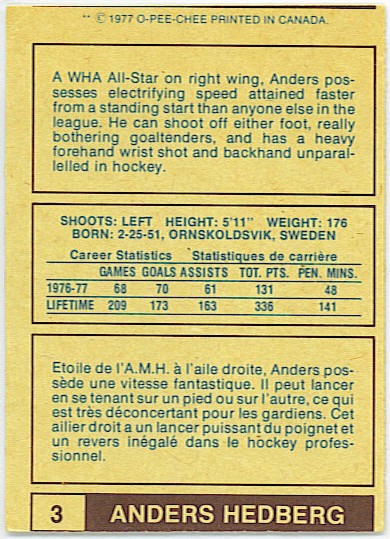