Who Sits, and Who Skates?

Share All sharing options for: Who Sits, and Who Skates?

Welcome to another installment of "Be a GM/Coach" where you faithful, huddled, unwashed masses, get to have your say.  Sure, professional Coaches and GMs have a wealth of experience and education to draw upon.  Of course they have contacts who know the ins and outs of the game.  But you've got an armchair and some Cheetohs, and your buddy Steve down the street once knew a guy, who dated a gal who had an uncle who knew a guy that washed Scotty Bowman's car... 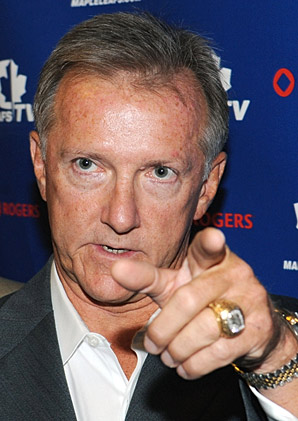 You can also look where you point, unlike SOME people...(via i2.cdn.turner.com)

We're going with another coaching question this week (somehow I missed posting one of these last week, my bad.)  The Leafs have had their first win of the season, and it's obvious to anyone with eyes that the team is now an unstoppable juggernaut of equal parts skill and sandpaper.  However, there is a new team to go through on our way to the PLAYOFFS!!!!1.

Dallas, unlike Anaheim, has been on an upswing.  They've got a fast team, with a good mix of veterans and youth.  Currently sitting 6th in the West, they've scored 37 goals already this season, one fewer than the Leafs have already given up.

It's now up to you Coach!  Who gets the call against the Stars?  What does your roster look like?  Do you stay with a winning team from Anaheim, or were their enough mistakes made that warrant someone getting a seat in the press box?  Give us your best guesses for the roster on Wednesday, and bonus points to those who pick the shooters, should we get to a shoot out.

After the jump, you'll have your options.

Here's the Leafs current roster, make sure you've got all your bases covered when filling out your line up!