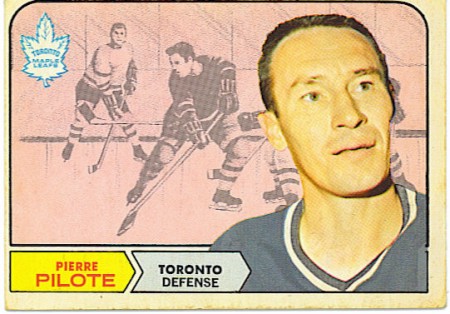 I mentioned the other day that I've gotten into the habit of watching vintage Leaf games on LeafsTV because I like to see some of the people they're playing.  Once in a while, there's a surprise for me, though.

Last night, it was a Leafs/Bruins game from 1968.  The objective for me was Bobby Orr, but it turns out there were a number of Leafs in that game I'd never seen play before.  The most interesting one was a smallish defenseman wearing number 2 (and a helmet, which really made him stand out) - Pierre Pilote.

The Pilote trade was one of the ones that always stood out for me as one of the typical absurd moves that the Leafs made as they fell from grace.  They sent former playoff hero Jim Pappin to Chicago, where he immediately became a perennial 30-40 goal scorer.  Pilote was ancient when they got him, played one season without racking up much of the offense he was known for, then retired.  Brutal deal, right?  I certainly always thought so.

The player they brought in to provide a little insight into the game was Mike Pelyk, who I wouldn't have recognized at all.  (Note to Mike Pelyk's Hairdo - his head is all but shaved now.)  Mike was just a kid on that team and spent the season paired with Pilote on the blueline.  He was able to give a lot more insight into just how that season went down, why the trade was made and the various things that were happening that year for the Leafs.  By the end of it, I wasn't hating on that deal anymore.  It's just one of a number of things that didn't go quite as planned for the Leafs.

The Leafs of 1967-68 had finished second overall in terms of goals against, but still missed the playoffs.  Punch Imlach knew he'd gone about as far as he could with the Leafs as they were made up.  He needed to retool and he needed some more offense.  It seems counterintuitive to trade a young forward for a defenseman in those circumstances, but Punch was doing a couple of things - Pappin was unhappy in Toronto and wanted out, and Pilote wasn't just any defenseman.  He was the puckmover behind all those high-octane Chicago offenses.

Beyond that, Punch was trying to work three young defensemen into the lineup - Rick Ley, Jim Dorey and Pelyk.  By adding Pilote, he would have three vets (Horton and Pronovost were the others) to pair them with.  (The decision to part with Allan Stanley must already have been made, even if it wasn't complete yet.)  He hoped it would accelerate their development.  Before the year was done, Pat Quinn would join that group as well.  (A similar thing was happening with the young forwards.)

Pilote went from a team that was basically free-wheeling to a team that moved pretty much in straight lines and played dump and chase.  It was half a season before he and the Leafs really adjusted to each other.  All the time, though, he was a total team-first kind of guy and worked really well with the young players.

The objective in 1968-69 was to make the playoffs.  Given the changes, that was what Punch figured would be a successful season.  They did, but ran into a buzzsaw in the 1968-69 Bruins.  They took such a pounding in that series that Stafford Smythe - in a fit of pique - fired Punch and ended that era in Leaf history.

Compounding things, Pilote surprised everyone by abruptly retiring to pursue business interests and Pronovost only had seven NHL games left in him.  This left the '69-70 Leafs with five kids plus Tim Horton, who missed training camp while pondering retirement and never got caught up.

So the deal didn't play out how they wanted, the Leafs really needed three seasons or so out of him, but at least now I get what they were doing.

For the record, though, the 1968-69 Leafs were 35-26-15, fourth overall in goals against.  The team that fell out of the playoffs as the Leafs climbed back in?  The Pilote-less Chicago Black Hawks (who were last in the East despite a record above .500).

Pierre on having briefly been a Leaf:

"I had started some businesses and Emile Francis had offered me a position to go to New York (Rangers) to work with their rookies. I had played with four or five rookies in Toronto — Mike Pelyk, Jim Dorey, Pat Quinn -- and got along real good with them. But when I look back, going to Toronto was the best move I could have made. I've been very successful in the Toronto area, I've been taken in by the ex-Leaf players (with the Toronto Maple Leafs' Alumni), I'm involved with the Hockey Hall of Fame. Toronto is the Mecca of hockey. They haven't forgotten me. If I was in Chicago, it might have been entirely different, but I'm glad I came over."

The HHOF take on Pierre:

"His teammates and friends called him "Pete" and although he was a small man, he was one of the most feared defensemen of Original Six hockey in the NHL. Pierre Pilote was born in Kenogami, Quebec, but his family moved to Fort Erie, Ontario, when he was young. He learned to skate as a child, but between the ages 14 and 17 he never played at all because the local rink burned down and he had nowhere to go. As a result, Pilote didn't play his first game of organized hockey until he was 17, and even then he almost had to quit because of bad luck.

He played parts of five seasons with the Buffalo Bisons, but during 1955-56 he was called up to the Black Hawks to try the NHL game. On his first shift, Tod Sloan of the Leafs walked around him for a great scoring chance, but his play improved steadily and by the next fall he was part of the team full-time.

Pilote also became renowned as a tough guy who should be avoided, a reputation enhanced when he knocked both Henri and Maurice Richard out cold during the same mix-up. Pilote played the next 376 games in a row with Chicago, including five seasons without missing a game. His "iron man" streak finally ended when he dislocated a shoulder during the 1961-62 season. Pilote was a superb defenseman at both ends of the ice. In his own zone he blocked shots fearlessly, but he also wasn't afraid to join the rush and he was a first-rate passer. He teamed with Elmer "Moose" Vasko on the blue line, and together they formed the best duo in the league in the late 1950s.

After the Hawks captured the Stanley Cup in the spring of 1961, Pilote was made captain in October 1961 on a team that also featured Bobby Hull and Stan mikita. He was named to the First or Second All-Star Team every year from 1960 to 1967 and played in eight consecutive All-Star games during that time. He won the Norris Trophy for three successive years, 1963 to 1965, and finished as one of Chicago's leading scorers from the blue line. In 1968 the Hawks traded their aging hero to Toronto for Jim Pappin, but Pilote played just one season with the Leafs before retiring. When he left the game, he made no apologies, shed no tears and didn't look back for a second.

He was inducted into the Hockey Hall of Fame in 1975." 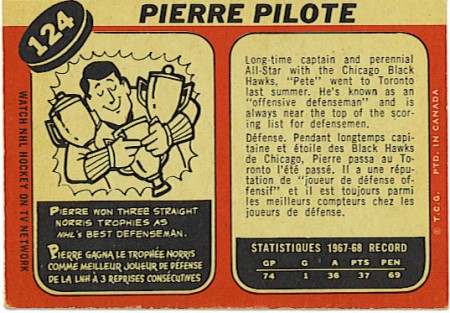