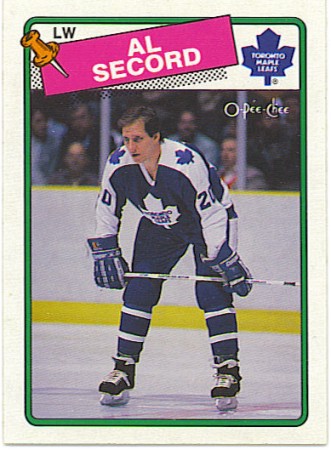 For the most part, I liked last night's game.  Gustavsson was strong again and if they can maintain that kind of effort, remember who they're supposed to be covering and throw it up the glass instead of to a wide-open opponent on the far wing, they'll be fine.

What they need, though, is some finish.  They're busting their tails out there and generating some chances, but there isn't really anyone who you can count on to bury one.  This is where Kessel should help once he's healthy.

If anyone emptomized the whole "great effort, no finish" game as a Leaf, it was Al Secord (though Mike Foligno's first couple of years came close).  If you ever listened to the radio in those days, you'd have thought that his first name was not Al but "and another great effort by."  Unfortunately, those rarely resulted in goals.  Al still had the drive but the hands were a bit spotty.

Al Secord came over in the trade that brought Ed Olczyk in exchange for Vaive, Thomas and McGill.  I hated this deal because I was a huge Steve Thomas fan and thought Vaive still had a lot to give.  I also had little love for Al Secord mainly because he was a pretty sound Leaf killer on a major division rival.

I came to like him, though.  Before Gary Leeman got added to that line instead, Olczyk-Secord-Osborne was a pretty good line for us.  Al always busted hump and never backed down from anyone.  From then on, I never complain when the Leafs picked up someone I didn't particularly like.  If I could come to appreciate Al Secord, I could come to like anyone.

In the early 80s, Al was one of the premier power forwards in the game.  Playing alongside Denis Savard, he hit for 44 and then 54 goals while putting up as many as 303 penalty minutes.  He then lost most of the next two seasons to problems with abdominal muscles.  This became kind of the trendy injury to get.  Lanny lost time to them as well.  When I tore mine, there was a touch of "gee, this is the same injury as Al Secord" combined with "oh ****, this is the same injury as Al Secord."

When he finally got better, he still had one more 40-goal year, but slid to 29 and then slid to Toronto.  A year and a half later, Gary Leeman had his spot in the lineup and Al became a Flyer.

Leeman, of course, had finish.  Kessel?  I hope so.

Al Secord in action and a look at Ken Yaremchuk, who you might never see otherwise.  It would be nice if it were ever possible to find, say, a Secord GOAL online, but the youtubes are what they are....

The HHOF take on Al:

"Secord played his junior hockey with three different teams--the Westford Raiders of the MTHL and the OHL's Hamilton Fincups and St. Catharines Fincups. He was also part of Canada's silver medal team at the World Junior Championships in 1977. The Boston Bruins selected Secord as their first choice in the 1978 Amateur Draft and was 16th overall and began playing for them the next season.

After spending two and a half-mediocre seasons with the Bruins he was traded to the Chicago Blackhawks where his career took off. His first full season with the Hawks saw Secord collect a career high in goals, assists and points while being named to the All-Star Game. Adding to his scoring touch, he racked up 303 penalty minutes on his way to becoming a feared player in the NHL. The next season, 1982-83, saw Secord top his goal and point production from the previous year with 56 goals and 86 points in 80 games while appearing in his second straight All-Star Game.

After spending seven seasons with the Blackhawks, Secord was traded to the Toronto Maple Leafs where he enjoyed a fresh start. This lasted only a season and a half, however, and he was dealt to the Philadelphia Flyers as they made a run for the Cup. In the off-season, Secord rejoined the Blackhawks after signing as a free agent for one last year with in the NHL. Secord retired in 1990, only to come back and play with the IHL's Chicago Wolves in 1994. He played for two seasons before hanging up his skates for good.

When Secord was a teenager, he fought forest fires in Northern Ontario and fell in love with flying. During breaks from hockey, Secord took flying lessons and racked up flying time to eventually become a commercial pilot after finishing his hockey career." 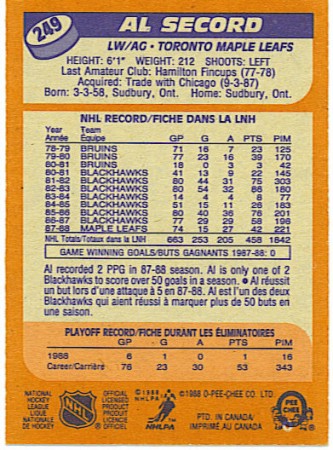