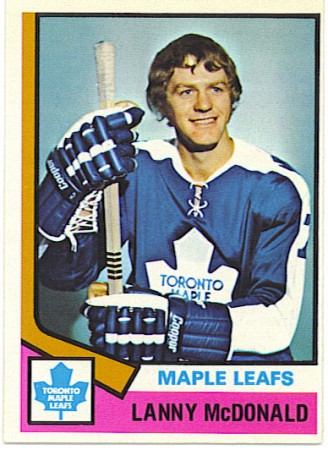 OK - without the name being printed on the bottom of the card, how many of you would know who this was?

Heading into Movember, there is no better place to begin than with a clean-shaven Lanny McDonald.  This might possibly have been the last day Lanny ever shaved, because once the 'stache began to grow, I don't think it ever really stopped.  Not until this, anyway: 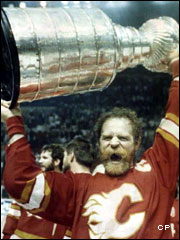 (Note - that is the one and only instance where it is acceptable for a Leaf to go win a Cup somewhere else.  Lanny rules no matter where he is.  Even in Colorado.)

Lanny was part of the great 1973 Leaf draft class that also brought Ian Turnbull and Bob Neely.  He was a highly-rated winger out of the Medicine Hat Tigers and a lot was expected out of him.  He was given the number 7 sweater that had been worn by the likes of King Clancy, Max Bentley and Tim Horton.

It didn't work out right away.  He didn't hit 20 goals in either of his first two seasons.  I read a story once that after he finally bagged a goal after a bit of a drought, one of the vets on the bench, rather than congratulating him, told him, "Great, now each of your goals is only costing us (insert large amount of money here)."  (The story didn't identify the vet.  Probably to save him the hate mail.)

In his third season, Lanny exploded for more goals, assists and points than he'd had in his first two seasons combined.  Working with Darryl Sittler and Errol Thompson (later Tiger Williams), the Leafs now had one of the best lines in hockey and Lanny was well on his way to becoming one of the most popular Leafs there has ever been.

I read once that part of the reason for his early troubles was that the Leafs had been sharpening his skates incorrectly.  They adjusted this in his third year and whammo - instant star.  If I could find that again, I'd list the source.

From 1975 through the trade in late 1979, the Leafs got to see the player they imagined when they drafted him - great skating, a terrific shot and a player who could handle himself when things got tough.  Lanny was the real deal.

Lanny's rise coincided not only with the great expansion of that moustache, but with the rise of the Leafs as a team.  The Leafs of the late 1970's were a team of great promise, culminating with the defeat of the Islanders in 1978 on Lanny's OT winner in Game 7.  It never happened, though.  Amongst all the crazy things that happened to tear that team apart, nothing was as singularly destructive and malicious as the trading of Lanny McDonald to Colorado.  It's the only instance I can think of where a player was traded simply to damage the room.

After a year and a half with the Rockies, he'd get a new lease on life in 1981-82 with his move to Calgary, and ended his career with the championship pictured above.  They retired his number in Calgary, and he's pretty unique in that he's among the most revered players in the history of two different franchises.

The HHOF take on Lanny:

"Lanny McDonald's hero while growing up was his father who had taught him the value of hard work and honesty on the family farm in Craigmyle, Alberta, about 22 miles from Hanna. His mother was a teacher in the three-room school that McDonald attended through grade eight. In school he had to refer to his mother as Mrs. McDonald, but outside of the classroom he was raised with a deep sense of family and community. McDonald would carry those qualities with him throughout his life.

He was the youngest of four children and learned to develop his shot by shooting pucks against the basement wall with his older brother. The only "live" hockey he witnessed in his childhood was when he would tag along with his sisters to watch their boyfriends play hockey in nearby towns. McDonald had learned to skate at the age of five and after years of minor hockey he left home at age 16 to try out for the Lethbridge Sugar Kings, a Tier II team in the Alberta Junior Hockey League. He made the team but was unspectacular in his first season, registering only two goals in 34 games.

The following season his production increased to 37 goals and 82 points in 45 games and he was high on the list of many an NHL scout from that point until draft day. McDonald was an AJHL Second team All-Star in 1971 and was named to the Western Canadian Junior Hockey League First All-Star team in 1973 as a member of the Medicine Hat Tigers.

He was rated as the Western League's most complete player in 1972-73 and led the Tigers with 18 playoff goals in 17 games, playing alongside Boyd Anderson and Tom Lysiak. Scouts always mentioned three qualities when they described McDonald; a great shot, a good skater, and tough as nails.

McDonald was Toronto's first choice, 4th overall, in the 1973 NHL Amateur Draft and got off to slow starts in both his rookie and sophomore seasons. Everything seemed to come together by his third season and he more than doubled his point production from the previous year. His fine showing earned him an invitation to the Team Canada training camp in preparation for the 1976 Canada Cup tournament. He appeared in five games for the host country and assisted on Darryl Sittler's series-winning overtime goal against Czechoslovakia. The highlight of his Leafs career came in the 1978 playoffs when he scored in overtime of game seven to eliminate the New York Islanders and send his Leafs into the Stanley Cup semi-finals.

McDonald was known for his blistering shot off the right wing and when he took the body hard in the corners players felt the contact and remembered it. He was a tough, clean player and was named to the NHL's Second All-Star team in 1977. McDonald also played in the 1978 All-Star Game and was a member of the NHL squad that played the Soviet National Team in the Challenge Cup series in 1979 to replace that year's All-Star Game.

When he was traded to Colorado by Toronto on December 29, 1979, the Leafs' faithful showed their displeasure by picketing outside Maple Leaf Gardens. McDonald continued his superlative play in Denver and although team success eluded the Rockies he was chosen to play for Canada in the 1981 World Hockey Championships.

McDonald happily returned home to Alberta when he was traded to the Calgary Flames by Colorado on November 25, 1981. He provided the Flames with the best hockey of his career and recorded a career-high 66 regular season goals and 98 points in the 1982-83 season. He was selected for the second time in his career to the NHL Second All-Star Team in 1983 and was awarded the Bill Masterton Memorial Trophy for his "perseverance, sportsmanship and dedication to hockey."

McDonald scored his first NHL goal at the Montreal Forum in 1973 and scored the last goal of his career again at the Forum, in game six of the 1989 Stanley Cup finals. It was with his usual class and dignity that McDonald chose to retire from the game after the 1989 playoffs.

Former Calgary teammate Jim Peplinski once said, "If you want to be good inside and outside the rink, Mac's a good guy to pattern yourself after. He's first-class all the way."

McDonald was always available to assist charities such as Big Brothers and Ronald McDonald House, but the Special Olympic remain his special interest. "Seeing those faces is as nice as scoring 66 goals; its a saw off," he once said about his work with the Special Olympics.

He was a Vice-President with the Flames organization for many years following his retirement and was named general manager of Canada's entry in the 2001 World Championships." 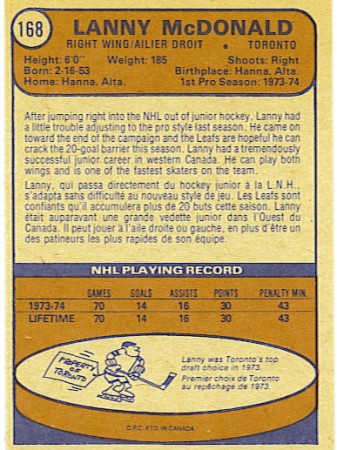