Last year was the 30th anniversary of the 1978-79 team, which wasn't really a milestone year or anything, but 30 was a nice round number and that team had a young Ron Wilson on the blue line.  Every Monday we had a member of that team as the LotD, which was nice because it meant I had one less decision to make every Monday, and that can only be a good thing.

It's the 40th anniversary of the '69-70 squad that had a 39-year-old Tim Horton and a cast of thousands under the age of 25 on the blue line.  That one ended with Pat Quinn running Bobby Orr and a really good brawl in which Forbes Kennedy fought everything that moved and a number of things that didn't.

I even considered doing a "better know a Toro" bit, where we could look at the OTHER major league team in this city (I kind of like this and will probably work it in somewhere).

There's another one out there, though, and since this is as much for my amusement as it is for yours, this is who I picked: 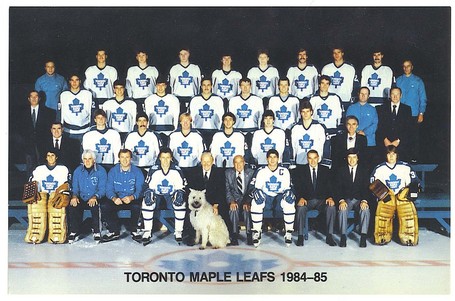 25 years ago, I went to my second NHL game.  My first had been against Washington in 1983-84, and this one may have been against Washington as well, as I can't remember much of anything about it.  I have two distinct memories - one is of a kid named Russ Courtnall (then wearing #16) streaking down the right wing.  This kid could fly and someone pointed out "That's our rookie."  He wasn't the only one.

The other memory is that I bought a team picture and a set of team postcards.  This is what I'll be using on Mondays.

Since I can't even remember the opponent, I certainly don't know the score of that game, but it's a pretty safe bet that they lost.  They did that a lot.  (It's also a safe bet because it was years before I saw a Toronto team win at anything.  I always thought that the Yanks and Tigers should have been paying me to go to Jays games.)

The 1984-85 team was YOUNG.  Just look at the picture.  The veteran leaders are all about 25.  There were so many kids there, plus you had a rookie head coach, a pair of 20-year-old goaltenders, teenagers on defense.

They finished 20-52-8, for a .300 winning percentage, dead last.  The silver lining would come in the form of a kid from Kelvington named Wendel Clark.  We didn't know that yet, though.

Crazy as it seems, this team was one of the ones that made me into a Leaf fan.  In 1984-85, I was in my second season away from my Flames and realizing that it just wasn't possible to follow them from three time zones away, particularly when the only means of doing so was box scores in the paper and the occasional story in Hockey Digest.  These were the games I was seeing and this was the team all my friends were into.  The Flames had changed so many players that when they were on TV a handful of times per year, I had no idea who most of them were.

In about January, I was in a card shop on Eglinton (that sadly no longer exists - it was a really good one, too) and the Leaf game was on the radio.  It was a power play.  The person behind the counter asked me if I knew who was on the PP, I said, "We are."  "You know," she said, "it's great to hear you say 'we,' you almost never hear that from young people these days."  I was kind of surprised, myself.

When we talk about the 1980s, it's always discussed as if it were some kind of block - 10 years of appalling hockey.  It didn't really feel that way, though.  in the first five years, they missed the playoffs four times, the whole Sittler debacle happened, the last of the 70's players were sent off (save for Salming) and the whole thing was a big downer.  In the back half of the 80s, you had these young, young teams that were full of prospects finding their way.  You got to watch them start to come together.  They made the playoffs four years out of five, had a couple of first-round upsets and while there was lots of frustration, the whole thing was a lot more fun.

(Note - normally I have to go in and re-add all the plus signs.  This time, I didn't need to, save for Walt Poddubny.  How'd he get to be a plus?)

Anyway - it should be fun.  If this year's team does great, we can look at this team and see how far we've come.  If it goes the other way, well, things could always have been worse....