Maple Leafs 1 v. senators 2: Why Have A Rule Book?

Share All sharing options for: Maple Leafs 1 v. senators 2: Why Have A Rule Book?

We stunk. We had no offence at all. I mean, that was almost embarrassing from seven or eight guys who we are counting heavily on. They only showed up when it was too late (a third-period Matt Stajan power-play goal). Playing on the perimeter, not wanting the puck, not willing to take a hit to make a play. Jittery when we do have the puck. We need a much better effort. To use one of Pat Quinn's best lines, you couldn't find half our forwards with a (World War II) Norden bomb sight. We'll find most of them tomorrow (at today's gruelling morning "bag skate" he hinted at). Show up early and watch. We need to skate without pucks.

That's about as good of a recap as I could put together for this game. I don't know if I would be flying high as a senators fan considering they barely squeaked out a referee-aided win despite the Leafs playing what will hopefully remain their most listless game of the year. Much like the Bruins teams that came to Toronto just after the lockout completely disinterested in playing hockey the senators last night did a lot of stacking the blue line and chipping the puck out of their zone. They capitalised on two Leafs' miscues, the aforementioned invisible hand of the referee, and a complete lack of urgency on the part of the Maple Leafs.

I guess that the one good outcome of yet another Kerry Fraser screw job is that we now know the rule book better than most. At least, we know it much better than senators fans:

Where to start? Let's go with Rule 80.3 which basically proves that Senators Lost Cojones should continue his search for those grapes:

Disallowed Goal – When an attacking player causes the puck to enter the opponent’s goal by contacting the puck above the height of the crossbar, either directly or deflected off any player or official, the goal shall not be allowed. The determining factor is where the puck makes contact with the stick. If the puck makes contact with the stick below the level of the crossbar and enters the goal, this goal shall be allowed.

And the truth shall set you free! Of course, someone that knows that a team that has a delayed penalty against them has to gain possession of the puck and not just touch it wouldn't have made that error. Oh, and that darned truth will also make you look like the typical senators fan that languishes in this province with scant knowledge of either the NHL prior to their club's inception or of the rules of the game that I can only assume they follow like a dilletante. So to recap what do we have here? A senators fan that not only admits that it was a high-stick goal (which it was) but makes an argument that is accounted for in the rule book and also negates the goal. Not much of a CONSPIRACY!! is it? Seems more like education trumping an Inferiority Complex. What does he have to say about that?

Oh dear.  I do believe I've just truculated in my pants.

Being a senators fan it's no surprise that he did so prematurely.

And as Chemmy pointed out this morning, it was not just that call that was blown by Kerry Fraser but the penalty shot call as well.

In the NHL penalty shots are awarded, traditionally, for the following:

Here are the infractions that can lead to a penalty shot: Rule 54 - Holding, Rule 55 - Hooking, Rule 57 - Tripping, Rule 61 - Slashing. Nowhere is high sticking on the list. Seems suspicious right? I mean, it's not like an NHL referee would have any issues knowing the rule book or lacking integrity right? Shit. Well, not too often right? One thing that I'll admit I did learn was the exact language for a double-minor penalty since I had heard, from a senators fan no doubt, that nowhere in the rules did it state that a double-minor was the punishment for drawing blood on a high stick (Rule 60.3):

Double-minor Penalty - When a player or goalkeeper carries or holds any part of his stick above the shoulders of the opponent so that injury results, the Referee shall assess a double-minor penalty for all contact that causes an injury, whether accidental or careless, in the opinion of the Referee. 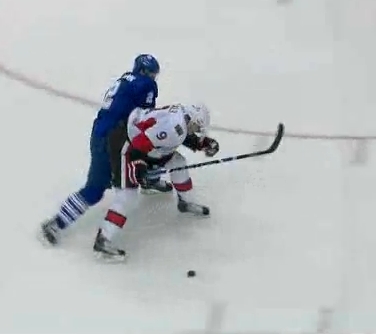 Yeah, that's a foul from behind. Too bad that even in a world where high sticking could lead to a penalty shot (ie not this one) Michalek never broke away from the play to begin with. So two blown calls in 37 seconds take the wind out of the sails of a Leafs team that could have used the benefit of racking up yet another win against the sad-sack senators (4-1-1 last year). I guess it's not really fair to say that it took the wind out of the Leafs' sails since they were pretty much terrible. However, there was a bright spot last night:

Yet through it all, The Monster was, as Schenn said, calm. That really was the thing that stood out about Gustavsson, who came into last Saturday’s horror show against the Washington Capitals at the start of the second period. He used his big body to get in the way of shots as opposed to trying for style points – that is the basic premise of goaltending guru François Allaire’s teachings – and wasn’t perplexed when the play was tight around his net. There was a swatting-at-flies sense to many of his saves that suggested a goaltender who was well-positioned.

The Monster didn't win the game for the Leafs but probably most importantly he didn't lose the team the game either. The first goal was a Benny Hill-esque sequence where Exelby just left the puck to a forward that proceeded to leave it for him. Too bad they didn't communicate. Ian White then slid into Gustavsson and three Leafs stood around watching the senators' forwards instead of planting each one on their ass. In contrast, on the rare occassions when Leafs forwards got near Pascal Leclaire they were tackled to the ice or hooked on their way.

All in all, it wasn't hard to see why Ron Wilson almost dropped a couple of f-bombs in the post-game presser but there were definitely signs of progress. Hopefully, Gustavsson's play provides the defence with the confidence needed to play their games rather than worry that every 40 foot wrist shot will find its way into the net. Stalberg's likely absence will result in most line juggling among the forwards but based on Kulemin's play last night - aggressive, listful, and full of pep - I hope to see the Ponikarovsky - Grabovski - Kulemin line put back together. Either way, those twelve will have to demonstrate a lot more willingness to compete.