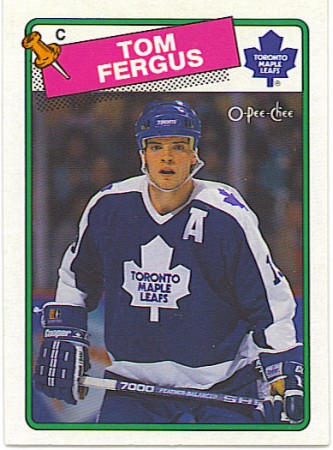 I was listening to Sportsnet this morning and they were talking about the great start by Alex Ovechkin.  He's the third player (in history?  I suppose) to start off a season with three points in each of the first three games.  He's at 5-4-9 after three games and leading the league.  As to the other two, one was Lafleur and I didn't catch the other.

It's one of the beauties of small sample sizes, of course, that lets a guy be on pace for 240-odd points.  I remember a couple of Leafs doing that.  One was Wendel Clark, who had 7 (I think - could have been more.  I need to check) points through two games and one period in 1991-92 before tearing that knee up again.  The other should be self-evident from the title of today's post.

With each loss for this year's team, I'm hearing more mentions of the Kurvers trade.  Let's not make that comparison - not yet, anyway.  Instead, let's talk about another trade where the Leafs picked up a disgruntled young American-born forward from the Bruins, a guy who the Bruins couldn't sign and who wanted out.  The Leafs gave up what looked like a fair amount, but ended up winning the trade handily.  That was the Fergus deal, and it happened 24 years ago this Sunday.

The trade happened after the first game of the 1985-86 season.  Rather than trading one or more first-round draft picks, the Leafs sent Bill Derlago, who was normally their top centre and was coming off a point-per-game season (62 in 62).  Derlago went to Boston and promptly fell off the face of the earth.  He'd be a Jet by season's end.

Fergus, on the other hand, came in and immediately led the Leafs in scoring.  He was a very good offensive player with a wicked wrist shot and meshed well with the Leafs.  Not an overly physical player, he nonetheless survived just fine under John Brophy and was a big part of the Leafs for years.  After the arrival of Ed Olczyk, he settled comfortably into the second-line role and occasionally played like a 1A.  He centred a terrific line with Damphousse and Marois in '89-90

His great start, though, was in that second season.  Right out of the gate, he went 5-4-9 (Ovechkin!!!1) and the Boston papers started a "Fergus Watch" to track his progress (the Bruins were a tad slow out of the gate that season.)

What derailed Fergus, though, was the same thing that took out so many other promising Leafs - injuries.  Fergus had a knack for finding the strange ones.  Get a load of this (from hockeydraftcentral, which may or may not be virus laden - I used google cache):

The loss of Fergus for so much of 1990-91 was one of the things that derailed that season and started the rash of trades.  He himself was eventually dealt to Vancouver for cash.  Still, great deal, especially when you see that Derlago had precisely 16 NHL goals left in him.

I've used this video before - partly because it's a fun one and partly because it's one of the few 80's videos that isn't simply about a scrap.  This is a Nov. 15, 1986 game between the Leafs and Wings.  It's the King Clancy memorial game, hence the black arm bands.  The sweater patches would come later.  Fergus gets the first and third goals.  There are also two Wendel scraps and a goal.  Watch Bester get the shutout and see how short goalies have to play....

the HHOF take on Tom:

"Though a native of the Windy City, Tom Fergus played his Junior hockey in Canada with the Peterborough Petes then joined the Boston Bruins for the 1981-82 season.

Fergus stepped right into the Bruins lineup and scored 15 goals as a rookie. The following year he showed marked improvement with 28 goals and 63 points. Fergus, in just two years had developed into the second line center the Bruins needed to compliment first liner Barry Pederson. In 1984-85 Fergus hit the 30-goal plateau while notching a career-best 73 points.

The best numbers of his career didn't stop him from getting traded however. On the eve of the 1985-86 campaign the Bruins shipped the skilled center to the Toronto Maple Leafs for Bill Derlago.

In Toronto Fergus became the team's top pivot and he responded with a career-high 31 goals and matched his previous seasons output of 73 points. However, the next year didn't go as smoothly. Fergus was held to just 49 points in an injury-shortened 57 games. The next year he had just 50 points for the struggling Leafs and fellow Chicago native Ed Olcyzk took over the first line duties. Now a second line center, Fergus bounced back with 67 points, and a personal best 45 assists in 80 games during the 1988-89 campaign. But his resurgence was short lived and the injury bug came back with a vengeance the following year.

Fergus played just 14 games for the Maple Leafs in 1990-91 and when he scored just four points through 11 games the next season, the Toronto brass had seen enough. They placed Fergus on waivers where he was claimed by the Vancouver Canucks.

Fergus was able to contribute for Vancouver with 34 points in 44 games to finish out that year, but the next year his scoring slipped and he managed just five goals and 14 points through 36 games. It signalled the end of his big league career.

But Fergus continued to play. He signed on with Zug of the Swiss league and spent his final two campaigns there before hanging up his skates for good in 1995." 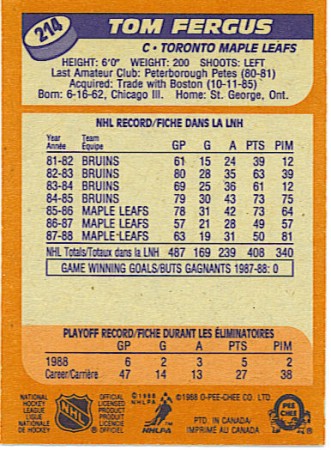