At The Ricoh: Toronto Marlies 3 v. Hamilton Bulldogs 2 (SO)

Share All sharing options for: At The Ricoh: Toronto Marlies 3 v. Hamilton Bulldogs 2 (SO)

After a trip across the Atlantic to Scotland to play the Hamilton Bulldogs the Toronto Marlies kicked off their season on Sunday (yay timely recaps!) and did so in conjunction with an outreach initiative aimed at local minority groups:

Burke was joined by Marlies coach Dallas Eakins and several players, as well as Parminder Singh – the Punjabi voice behind CBC's hockey coverage – to help the Leafs deliver their message.

The group – which also featured Leaf rookie Viktor Stalberg, and the Marlies' Andre Deveaux and Joey MacDonald – participated in a question and answer forum after the Marlies win.

Fans were also shown the basic points and rules of the game – something aimed at newcomers who might not be familiar with hockey.

They also extended a welcome to local hockey bloggers. Luckily, I met both criteria. Unfortunately, I couldn't make it but I sent two envoys in my stead, making sure that they were both minorities - Greek and Belarussian - to keep with the theme of the day. Obviously, the latter doesn't count as new to hockey but if you saw him play you wouldn't believe that he's played before. Anyway, this is the first Marlies recap and hopefully I'll be able to get out to a few more games so that I can keep a close eye on the farm.

This also marks a first because it's literally the first time that someone I went to school with has written a post for this website. Only took three years. So a recap of the game is after the jump:

A special thanks to my my Greek friend who sent in the following:

If you enjoy good old gritty hockey you would have enjoyed the game against Hamilton this past weekend. And any true blue Leafs fan would be highly advised to travel down to the Ricoh Coliseum to check out the talent of the future. The Marlies earned their first at home win of the season with a come from behind victory over Hamilton in the shootout.

The first was the by far the best period. Brennan Evans made a dazzling goal line save to stop what seem to be the first Hamilton goal. J.T. Wyman put the first goal of the game in for Hamilton but Toronto quickly answered back with a nice goal from Kyle Rogers, and assisted by Alex Berry, and Darryl Boyce. Boyce is one player to watch on the Marlies because of his ability to apply pressure both offensively and defensively. 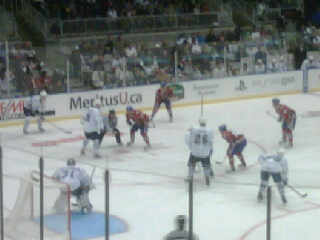 Hey! This is almost clear

The first was also graced with two fights, or maybe one great fight and a dance between Toronto's Ben Ondrus and Hamilton's Glumac. The great fight was between Richard Greenop and Neilson which as you can see was a good tilt.

The two went at it for a good 2 and a half minutes, both landing solid shots, which ended with a friendly pat on the head and both players still standing . Greenop looks like he could be a great enforcer for the Marlies this season and should keep the fans fired up with his efforts.

Brock Trotter put the Bulldogs ahead in the late in second but it was a mostly uneventful period.

The third was a spirited battle between the two rivals with good hits and opportunities. Ondrus, making up for a pitiful fight in the first, put a goal past Curtis Stanford to tie the game in the twelfth minute.

The game ended in a fan pleasing shootout. Toronto's MacDonald looked good compared to Hamilton's Stanford who lost the shootout Marlies 3 - Bulldogs 2. Jiri Tlusty, Tyler Bozak, and Alex Foster scored for the Marlies in the shootout.

Some players to watch in the upcoming games:

Carl Gunnarsson: Looked a bit shaky and you can see why the leafs sent him to develop at an professional level. Despite the rough start on the farm he will develop in to a classy offensive defensemen once he finds his hands at the pro level.

Christian Hanson: Was by far the best player on the ice.  He is a classic example of the saying ‘men playing with boys'. He hit harder, skated quicker and didn't back down from any player. Marlies Fans don't get use to seeing Hanson in the coliseum because he matches Burkie's gritty player mold and should be called up to the leafs.