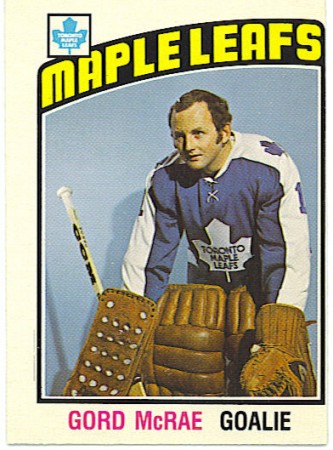 Was all set to go with the LotD today, but today's news on Mr. Gustavsson (well, really the call-up of Mr. MacDonald) forces a bit of a change (we do try to be vaguely topical, even if on most days it isn't all that apparent and the rest of the time it just doesn't work).  Anyway, instead of Gary Sabourin, today is about backup goaltenders who we hope can come somewhat out of the weeds and not stink.

I was trying to think of the last really good backup the Leafs had - and by "really good" I mean simply someone who didn't evoke a cringe when you found out he was starting.  Corey Schwab surprised everyone by holding the fort rather well when Cujo went down with the hand injury.  That would be one case, I guess.  Damien Rhodes was a good enough backup that Ottawa wanted him as a starter.  Allan Bester, in my opinion, anyway, was a better goalie than the guy who was starting (I think he suffered from the Doug Flutie problem as well - everyone wants the big goalie).

The problem with good backups is that someone always needs a starter and will thus take your backup away unless you want to pay them more money than a backup normally should earn.  Having a backup you can count on for an extended period of time is thus rather difficult.

At any rate, today I give you Gord McRae, who is basically the forgotten Leaf goalie of the 1970s.

From the moment Bernie Parent left in 1972 until Mike Palmateer proved that, yes, he could do the job, the Leafs went through goalie after goalie, trying desperately to find a starter they could count on.  Gord McRae backed all of them.  You look at his record and wonder why he didn't play more than he did.  Perhaps there was something about his game that didn't lend itself to being a starter, or perhaps he was just really good at beating lousy teams.  In any case, he often had a much better-looking set of numbers than the guys who were supposedly ahead of him.

Gord was a tall goalie for his day, standing 6'3", and played a stand-up style of game.  He was signed by the Leafs after spending time at Michigan State, also a little unusual for the early 70's.  Perhaps they thought they were finding another Dryden.

Gord's first NHL action came in '72-73.   He was third in appearances behind Ron Low and Jacques Plante.  He did manage to win 7 of 11 games, but that wasn't enough to stick for the following season.  The Leafs instead picked up Doug Favell and Eddie Johnston and McRae spent the season in the minors.

He was back in '74-75 as the number three behind Doug Favell and Dunc Wilson, but posted the best numbers of the lot and was second in wins despite playing only 20 games.  This got him the backup job the following year behind Wayne Thomas.  He'd back up one more time in '77-78, playing 18 games behind Mike Palmateer.

A career backup, but a pretty good one.

No video, but when was the last time you saw an action shot with the Kansas City Scouts? 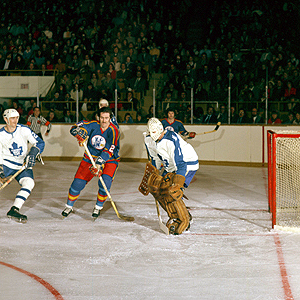 The HHOF take on Gord:

"Lanky netminder Gord McRae did not resemble a gifted athlete but his quickness and stand-up style made him a useful backup for parts of five years with the Toronto Maple Leafs in the 1970s. "The Bird" also enjoyed success in college and the minors in a solid career.

Born in Sherbrooke, Quebec, McRae spent three years with the Michigan Teach Huskies. Undrafted and unsigned, he played 24 games for three different Eastern League franchises in 1970-71. The Leafs signed him as a free agent in December 1971 when he was excelling with the CHL's Tulsa Oilers.

After Toronto lost Bernie Parent to the WHA and Jacques Plante and Ron Low struggled in 1972-73, McRae was given an opportunity to play in the NHL. He posted a 7-3-0 record for the club then returned to the CHL where he led the league in appearances in 1973-74.

Late in the 1974-75 season, Toronto turned to the youngster again when faced with inconsistent goalkeeping. McRae was solid the last 20 games of the season and led the club to a first round upset win over the L.A. Kings in the first round of the playoffs. The next year, he was a steady back up to Wayne Thomas but lost his slot on the depth chart in 1976-77 when rookie Mike Palmateer burst on to the scene.

In 1977, he starred for the Dallas Black Hawks and was named to the CHL's first all-star team. He also led the league with a 2.71 goals against average and shared the Terry Sawchuk trophy with Yves Belanger for allowing the fewest goals in the league. McRae returned to Toronto and played 18 games as Palmateer's backup in 1977-78. He retired after helping the team enjoy its best year since 1967 under coach Roger Neilson." 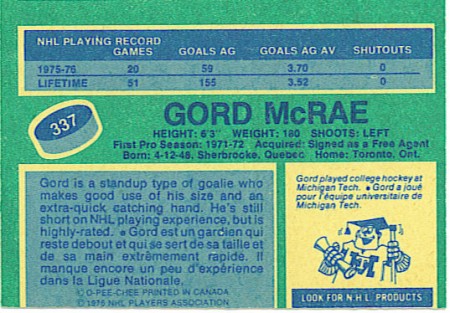