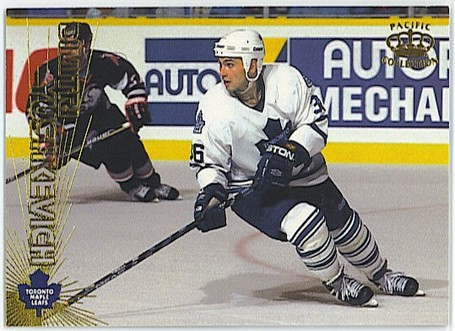 The Pens had so much fun the last time that they played Toronto that they celebrated with a brand new coach and a hot streak that they rode all the way to the Stanley Cup.

Oh, and while we may not necessarily need that new coach, we'll take that hot streak and championship if you're done with it, thanks.

Sometimes for the LotD, I like to pick someone who played for both teams (but whose play had a decided advantage toward the Leafs), so I started looking through the scan pile....

Rick Kehoe.  Hmm - no.
Rene Robert.  Didn't help Pittsburgh either, but no.
Randy Carlyle.  Absolutely not.
Pat Boutette.  Well, Pat's Pens were so bad they wound up with Mario.  So no.
Hal Gill.  Won a Cup in Pittsburgh?  Gads.
Garry Valk!  Waitaminnit - he's not in the scan pile.  I don't think I even have him on a card.

Dmitri Yushkevich didn't start out terribly popular in Toronto.  He came over from Philly in yet another trade where the Leafs gave up a first-round pick and his play the first few seasons didn't really show that he was worth it.  The fact that the Flyers didn't get that much from the picks helped some, but this didn't look like one of Cliff Fletcher's gems.

Pat Quinn found something, though, and under Quinn Yushkevich emerged as a total warrior, a shot-blocking machine who could shut down the best of them and even produce a little offense, to boot.  With Markov at his side, the Leafs had one of the most fearless defense tandems I've ever seen.

In the '99 playoff run, he was brilliant as the Leafs got past Philly in a nasty, grinding, defensive series (the Leafs won it while scoring 9 goals in 6 games) and again past Pittsburgh in the second round.  Yushkevich drove Jaromir Jagr to distraction and he never got untracked.

Yushkevich kept on being great under Quinn.  He was a rock in '99-00, '00-01 and through the first 55 games of 2001-02, when he was suddenly sidelined with a blood clot in his leg.  He'd never play for the Leafs again, and it wasn't clear if he'd ever play at all.  Toronto sent him to Florida for Robert Svehla, and it was the last season in the NHL for both of them.

The HHOF take on Dmitri:

"In 1989 Yushkevich was invited to play at the World Junior Championships in Anchorage, Alaska, with the USSR junior team. He and Pavel Bure were the youngest at the training camp. Dimitri didn't believe he had a chance of making the team, but he was added to the first line, which included Pavel Bure, Sergei Fedorov and Alexander Mogilny and won his first gold medal. He subsequently appeared at two more junior championships, but his memories of these weren't as sweet. In the most important games in 1990 and 1991, the Soviet team lost to Sweden and Finland when the opposition scored last-minute goals.

In 1991 Yushkevich switched to Dynamo Moscow, then headed by Vladimir Yurzinov. The experienced Yurzinov favoured an NHL style of practice, tough play and swift passes, and prepared his boys both to win Russian championships and to migrate to the NHL. Thanks to this training, it wasn't hard for Yushkevich to play North American hockey when he came to the Philadelphia Flyers. By then, Dimitri was also an Olympic champion. To many experts' surprise, the young and ambitious Unified Team of the former USSR had won the gold in Albertville, France.

Yushkevich made a successful debut on the Philadelphia team in 1992 but three years later he was traded. In 1995 he joined the Toronto Maple Leafs, where his first three years proved an ordeal and a test of his durability. Things for Yushkevich changed after Pat Quinn arrived in 1998 and relied heavily on his skill and leadership.

In the 1999 playoff series, the Toronto Maple Leafs eliminated the Pittsburgh Penguins, mostly because Yushkevich was so effective at hindering the Penguins Jaromir Jagr.

The 1999-00 season validated Yushkevich's stature as one of the league's leading defencemen and an invitation to the All-Star Game confirmed it. Yushkevich went on to play two more seasons in Toronto before he was traded to the Florida Panthers in the summer of 2002. The hard-nosed defenceman played only 23 games with the Panthers before being dealt to the Los Angeles Kings. After another 42 games, the Philadelphia Flyers re-acquired their original draft pick from 1991 in the latter stages of the season to help reinforce their blue line, however, Yushkevich's stay would be short lived, opting to play in his homeland as of the 2003-04 season. 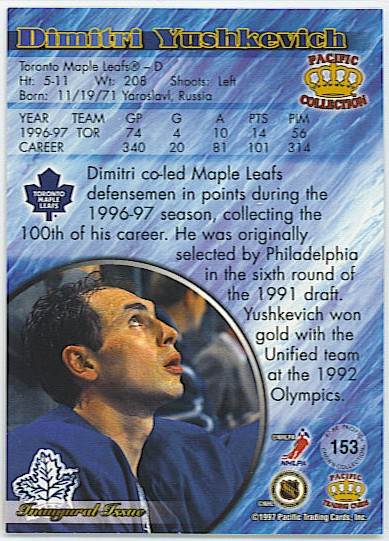