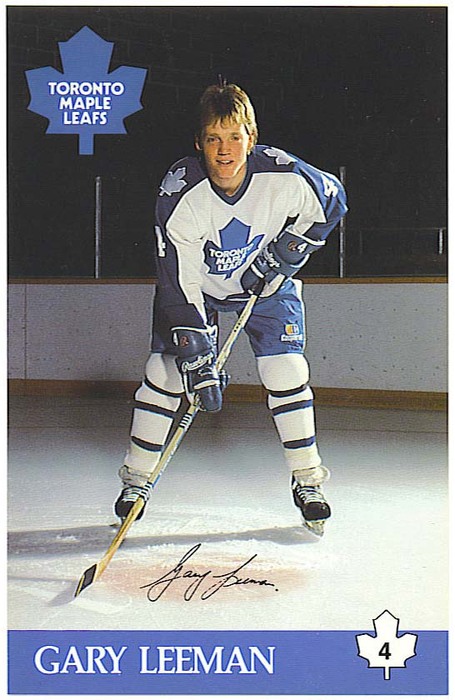 (You know, having today's Leaf of the Day mostly completed yesterday meant that I could post much earlier today.  There's a lesson in there somewhere, I'm just not sure what it is....)

Last season, Ian White was having a terrible time getting himself back into the lineup.  Wanting to play, he jumped at the opportunity to try his hand at forward and he was surprisingly effective at it.  He has since become everyone's darling back on the blue line, but it could have been plenty interesting to have left him up front - like the Leafs did with Gary Leeman.

Leeman was actually a forward when he started out in junior.  He was moved back to the blue line in 1981-82 and had tremendous success at it - he became a second-round pick of the Leafs in 1982 and then made the WHL First All-Star Team in 1983.  He set a scoring record for defensemen in the WJC in 1984 that was only surpassed a couple of years ago.

He actually spent a couple of seasons on the Leaf blue line before being moved to forward full-time.  The Leafs had great success with this with Clark and Leeman (both of which also had forward experience as juniors) and many forget they also tried it for most of a season with Todd Gill.  Hockeydraft Central suggests Leeman became a forward in 1984-85.  I always thought it was a year later, but in either case, by '85-86 he became a key part of the Leafs forward contingent, playing on the Hound Line with Clark and Courtnall.

Of all the disasters that befell the Leafs in 1990-91, few were worse than the right shoulder injury Leeman took on Nov 10, 1990. (Hmm - just noticed today is the 19th anniversary of that.  I must have forgotten this scan for a reason.  For that matter, Leeman's debut was against Minnesota - the other Minnesota.  Coincidences abound! )  Checked into the boards by Chris Chelios, Leeman was badly injured and wouldn't play again until the middle of January.  Gary used an old-fashioned pair of shoulder pads and it was thought at the time that this contributed to his injury.

When he got back, it was to a very different Leaf team.  His linemates had been traded away less than a day before he was injured, and he came back to a team that couldn't score.  Much was expected, but Gary was never really the same after the injury.  His goal totals fell to 17 in 1990-91, then he only had 7 at mid-season the following year when he was part of that huge deal that brought Gilmour to Toronto.

The change of scenery didn't really help.  In the 122 games he had remaining (spent with four teams), Gary Leeman scored only 23 more goals.  It was an unfortunate end to a career that was really taking off.

There used to be a Leafs/Blues playoff game on youtube in which Gary Leeman potted a couple of goals.  No more.  If players didn't fight, their existence might not be saved at all.  This is the infamous "Durno" clip - a week to the day before the 7-6 comeback win over Boston:

The HHOF take on Gary:

"A speedy right-winger with soft hands, Gary Leeman played nearly 700 NHL games for five different clubs. He was best known as a gritty scoring machine on the Toronto Maple Leafs with a 50-goal season to his credit.

The Toronto native attended Notre Dame College in Wilcox, Saskatchewan and was a standout defenceman for two seasons with the WHL's Regina Pats. He was chosen 24th overall by the Toronto Maple Leafs in the 1982 Entry Draft and then returned to junior where he scored 86 points in 63 games. Leeman also represented Canada at the World Junior Championships in 1983 and joined the Maple Leafs for two playoff games that spring. Following the season the gifted youngster was placed on the WHL first all-star team.

Leeman scored 12 points as a rookie in 1983-84 and was loaned by Toronto to Team Canada for the World Junior Championships. By the 1985-86 season, Leeman started to use his speed and shot more effectively. He formed the "Hound Line" with Wendel Clark and Russ Courtnall while helping the Leafs come within a game of the semi-finals.

Beginning in 1986-87, Leeman was a top goal scorer for the club with four-straight 20-goal seasons. In 1988-89, he scored 32 goals and was picked to play in the NHL All-Star Game. In 1989-90, he formed the potent "GEM Line" with Ed Olczyk and Mark Osborne and became the second Toronto player after Rick Vaive to register a 50-goal season. He dropped to 17 goals the next season when his effectiveness was reduced by a shoulder separation.

By the 1991-92 season, Leeman needed a change of scenery and was the key player sent to Calgary in the blockbuster trade that brought Doug Gilmour to Toronto. Leeman never discovered his scoring touch in Calgary, Montreal, Vancouver, or St. Louis in the ensuing years. He spent the 1997-98 season with the Hannover Scorpions of the German League then spent time in Germany and Switzerland before retiring in 1999." 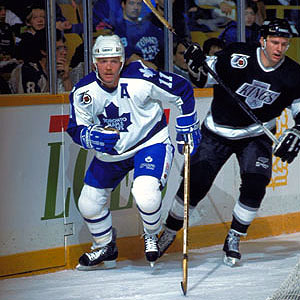 Gary the forward - via www.legendsofhockey.net