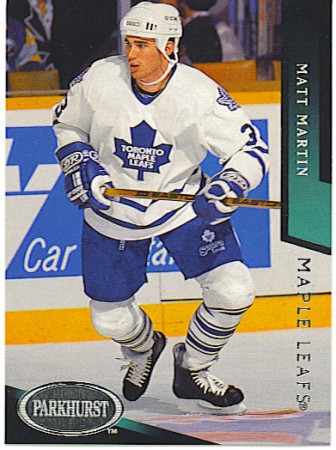 No, I'm not suggesting that Carl Gunnarsson is the next Matt Martin, but lacking another real focus for today's LotD, I wandered through the scan pile looking for youngish defensemen who'd come up from the minors from time to time and whom I wasn't intending to use somewhere else, and this left me with Karel Pilar and Matt Martin.

So Matt Martin it is.

Once you got past Drake Berehowsky, who was playing at least semi-regularly by 1993-94, there wasn't a ton of defensive depth in the system.  There were guys like Dave Harlock and Chris Snell, both of whom would play a little bit, but the most NHL-ready of the lot was probably Matt Martin. Certainly I expected him to be playing regularly within a year or so.  He came to the Leafs in '94 after playing with the US National/Olympic team.

Matt was one of those players who'd be having a good game when you didn't really notice him.  He had pretty good size, but wasn't really a banger out there, nor was he the sort of guy who'd make the flashy rush.  His real job was just to go out there and be steady.

One would have thought that with the departures of Rouse and Lefebvre and the slow decline of Macoun that there would have been room for Matt to make his presence felt.  Certainly the Leafs of the mid-90s needed help on the blue line.

It never seemed to really happen, though.  Matt was up and down every year except 1995-96, where he only played 13 games and I can't really recall what happened to him for the rest of the season.  An injury, I suppose (Note - the HHOF says broken ankle for 30 games - that would get us to 43....).  Even when he was up, he would play a bit and sit a bit - never making it much out of the 6-7 spot.

After spending '97-98 with the Chicago Wolves of the IHL, Matt left the system. 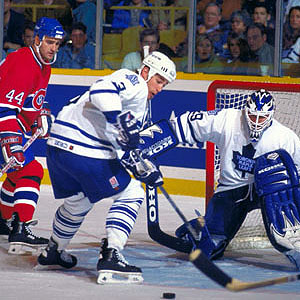 Matt and the Cat - via www.legendsofhockey.net
Matt's stats:


The HHOF take on Matt:

"It never hurts to spend time at the arena sitting beside a player of the calibre of Paul Kariya. And that is exactly what Matt Martin did while both were playing for the University of Maine Black Bears. Chosen by Toronto in the fourth round of the 1989, Matt Martin joined the Leafs in 1993-94 after playing with the U.S. national team. Throughout the season, Martin bounced between the two teams, joining Toronto for good after the Olympics in Lillehammer Norway.

But the bouncing act continued. The next season, Martin started with Toronto's AHL franchise in St.John's but was recalled because of injury during the playoff drive. In 1995-96, it looked like he would stick in the NHL, but he broke his ankle and missed 30 games. In 1996-97, Martin again spent time between the AHL Leafs and the NHL Leafs. That was Matt Martin's final shot at the NHL. He signed with Dallas as a free agent during the summer of 1998 but has remained in the minors since. " 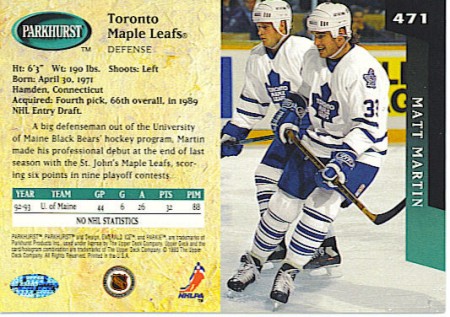