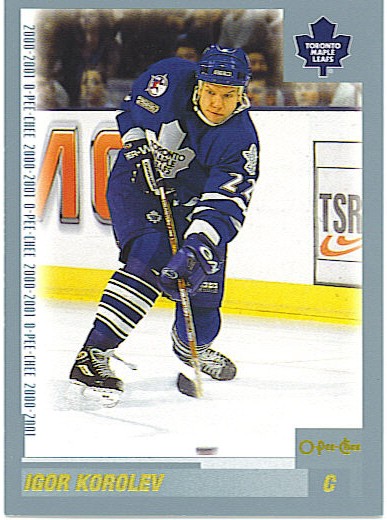 Not necessarily a big name today, but a player that I always liked - well, "always" to the extent that he had no actual existence prior to becoming a Leaf, anyway.

New Leafs GM Mike Smith was noted for having a love for things Russian, and he showed this in his first off-season with the free agent signing of Korolev.  Igor was a guy who hadn't really shown a whole lot in St. Louis, then blossomed in Winnipeg before falling back to earth in Phoenix.  The Leafs weren't a particularly good team at the time and this looked like little more than Smith grabbing a guy off the scrap heap and hoping for a lucky break.

Smith knew something many of us didn't, though, and Igor came to play a pretty big role on this team, particularly in the early Quinn years.

Igor was that perfect #2-3 centre - he played a great two way game, had just enough offense and could play against the better forwards on the opposition.  Quinn's teams never seemed to be all that much about defense, and Igor gave them just enough of a defensive conscience to help them to win.

After the 2001 playoffs, Igor was sent to Chicago for a third.  He had a lot more limited role there and never put up much for numbers.  He left for home after 2004 and was still playing in Russia last season. 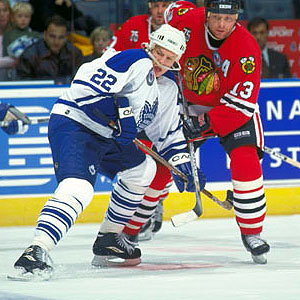 Igor doing his thing against Chicago - via www.legendsofhockey.net


The HHOF take on Igor:

"Center Igor Korolev had four seasons with Moscow Dynamo to his credit before the St. Louis Blues made him their first selection in the 1992 NHL Entry Draft. Korolev began the 1992-93 with Dynamo again but after just five games he decided to cross the ocean to give the NHL a shot.

Korolev played 74 games for St. Louis but his adjustment to the smaller ice surface and tougher style of play was slow with Korolev only able to score four goals and 27 points. During his second year with the club, things did not improve as his point total dipped and when the Blues brought in centers Petr Nedved and Peter Statsny late in the campaign.

The Blues left Korolev exposed in the 1994 Waiver Draft and the Winnipeg Jets, who were urged to select Korolev by their star center Alexei Zhamnov, decided to pluck him. Zhamnov and Korolev had spent four seasons together with Moscow Dynamo and the Winnipeg brass decided to try them together in the NHL. Korolev showed signs of improvement by scoring 30 points in 45 games during the lock out shortened season. However, the following year he broke out by scoring 22 goals and 51 points 73 games, good for career-highs in both offensive categories. He was unable to build on this success, however, because his season was cut short by a contract squabble, then things never really got on track on the ice as Zhamnov had been traded away to the Chicago Blackhawks. When he scored just 10 points in 41 games, the team decided to cut him loose in the summer.

The Toronto Maple Leafs, who were being run by former Jets General Manager Mike Smith, offered Korolev a free agent contract in the summer of 1997 and he rebounded with his new club. Korolev played a solid two-way game for the Leafs while serving as their second line center and was able to score 17 goals and 39 points, good for fourth on the team. The next two seasons he upped his totals with 47 and 46 points, which included his second 20-goal campaign. In 2000-01, his totals dropped to 29 and the Leaf brass decided to let him explore free agency in the summer of 2001.

Mike Smith had now moved on to the Chicago Blackhawks, and he decided to reunite Korolev with Zhamnov once again by signing him and bringing him to the Windy City. Korolev never actually played on a line with Zhamnov, but he did bolster the 'Hawks forward depth though his point production was disappointing and would split his next three seasons between Chicago and the team's AHL affiliate in Norfolk.

On the international stage, Korolev represented his homeland at the 1991 Canada Cup and the 1992 World Championships." 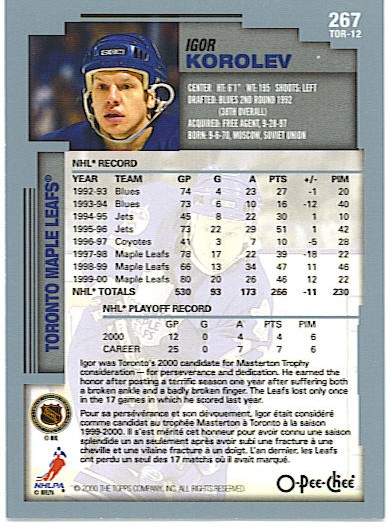