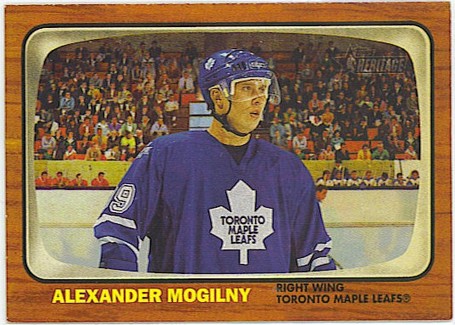 In the 2002 playoffs, the Leafs were dropping like flies.  At one point in the second-round series against Ottawa, the Leafs had 10 different players out with injuries.  Now, not all of them were big parts - third-string goalie Tom Barrasso was one of them.  Still, though, Alyn McCauley was centering the number one line.

People remember the incredible dominance of Gary Roberts - a one-man wrecking crew playing with shoulders so messed up that both would require off-season surgery.  People remember McCauley, playing to the point where he couldn't even grant interviews because he was too tired to give them.  Curtis Joseph had three shutouts in that series.

And then there was Alexander Mogilny.

Game 5 of the series had the Alfredsson hit on Darcy Tucker.  This play and the resulting goal had Ottawa one win away from advancing to the semi-finals.  Worse, it had led to yet another serious injury.  The Leafs went into Game 6 needing a win to stay alive.  Heading into the third period, it was 3-3 before Alex Mogilny went to work:

In Game 7, Mogilny was at it again, scoring the first two goals in a 3-0 shutout, and the Leafs beat the Sens again.

Alexander Mogilny wasn't the same kind of scoring machine in Toronto that he'd been in Buffalo and to an extent in Vancouver.  He was still a supremely-talented player, though, probably the most highly-skilled forward not named Sundin that this team had seen since the departure of Gilmour.  He was the only player other than Mats to lead the Leafs in scoring during the years Mats was a Leaf.

A hip injury in 2003-04 cost him over half the season and a lot of his effectiveness and he'd end up going to New Jersey once the lockout was over.

Still, for those who say the Leafs never had a prime-time winger when Sundin was here, I can think of at least one who was pretty close.... 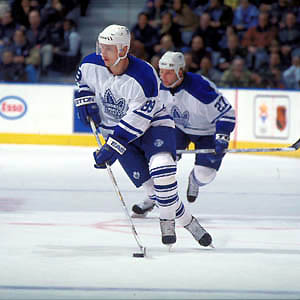 
The HHOF take on Alexander:

Back in 1989, Mogilny set his sights on defecting to the West. His opportunity came in 1989, immediately after the Soviet Union won the gold medal at the World Championships held in Sweden. He secretly flew to Buffalo, New York, where the Sabres, who had drafted him in 1988, held his NHL playing rights.

Predictably, Mogilny's defection unleashed a firestorm of criticism in the Soviet Union, and the sensitive 20-year-old took it to heart. He also feared for the lives of his parents, as well as his own, and he looked quite pale and shaken during his first few NHL games.

But as time went on, Mogilny's confidence grew. After scoring only 15 goals in his rookie season, he registered 30 and 39 in the next two years. As Buffalo added more Russian players such as Yuri Khmylev and Alexei Zhitnik, Mogilny was the one to help them overcome the barriers he had encountered. Having gained a fair command of English, he also began to ease himself into the American way of life. Among his favorite pastimes was golf, and with his help, it played an important role in the life of his Russian teammates.

When Buffalo acquired Pat LaFontaine, Mogilny's game took a quantum leap forward. Here was a player who performed at his level, and Alexander had no desire to play second fiddle. Instead he was inspired and challenged. When the two were on the ice at the same time, it seemed as if they could take on the opposition without any help. In Winnipeg, on February 10, 1993, Mogilny singlehandedly defeated the Jets team with four goals. Two weeks later, at home against Detroit, he scored another four. In 1992-93 LaFontaine led the team with 148 points, but Mogilny was close behind with 127, including a league leading 76 goals in 77 games.

Injuries limited LaFontaine to 16 and 22 games over the next two years, and his absence naturally caused Mogilny's output to tail off slightly. The burden of team leadership also fell to the Russian winger, who was named interim team captain, and he rose to the challenge, giving his all in practice and expecting the same from his teammates.

A 1995 trade to Vancouver proved to be a tonic for Mogilny, who led the team with 55 goals and 107 points in his first year as a Canuck. After the "Russian Rocket," Pavel Bure, left Vancouver, Mogilny became a fan favorite. But there were no Canucks, not even Mark Messier who could take the place of Bure or LaFontaine, the sort of player who understood Mogilny instinctively. During the 1999-2000 seasons, Mogilny was sent to the New Jersey Devils. He arrived just in time to help the team win the Stanley Cup in 2000.

Mogilny led the Devils in goals with 43 during the 2000-01 season but the team was defeated in the Stanley Cup final by the Colorado Avalanche. In the summer of 2001 Mogilny signed as a free agent with the Toronto Maple Leafs and during the 2002-03 season played his 900th game and recorded his 500th assist, while awarded the Lady Byng Trophy at season's end.

During the 2003-04 season, Mogilny reached the 1000-point plateau despite missing the better part of the season recovering from a hip injury. Following a lock out season in 2004-05, Mogilny returned to New Jersey for the 2005-06 season. However, in order to make salary cap room for Patrik Elias, Mogilny was placed on waivers by the Devils and was assigned to their AHL affilate in Albany, New York. He would go on to appear in 19 games with Albany and throughout the summer continue to recover from his lingering hip injury.

Mogilny has not offically retired from the game of hockey, however his 1032 points in just 990 games make him the second highest scoring Russian NHLer behind only Sergei Fedorov.

Aside from his World Junior appearance in 1988, Mogilny has only represented his homeland at the 1996 World Cup of Hockey." 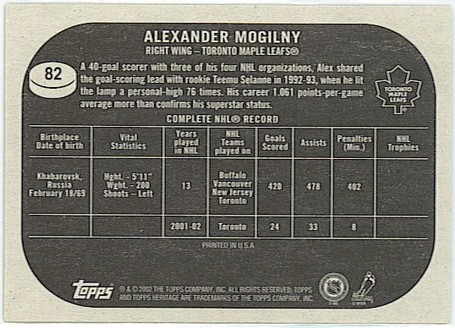