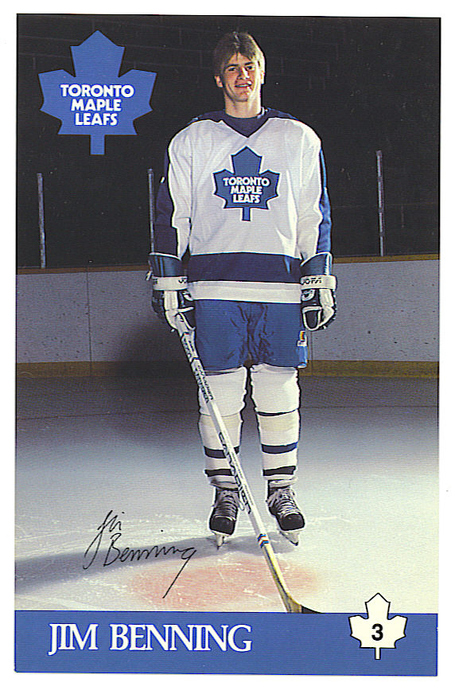 Whereas Gary Nylund was drafted to be the stud defenseman - the rock upon which the Leafs would build their defense, Jim Benning was pretty much the opposite.  He was the skill guy.  Though neither really fleet of foot nor physical, Jim could really bring the offense.

As part of the Portland Winter Hawks in 1980-81, Jim set what was then a WHL record for defensemen with 111 assists and 139 points.  His 45-game points streak that year still stands as a record for defensemen.  The Hockey News had him rated as the number 9 pick for the 1981 draft, and the second-best pick out of the west, but the Leafs took him a bit higher at #6.

The Leafs, already a team a bit weak on D and in net, went with three rookies on the blue line in 1981-82 - Benning, Boimistruck and McGill.  Conventional wisdom is that the experience ruined all three of them.  Boimistruck was certainly out of the game in a hurry.

As for Benning, I never thought he was all that bad, to be honest.  He was sort of a Kaberle type - a guy who could run your PP but wasn't the strongest or toughest one out there.  He could get overpowered by the stronger forwards but that's the nature of stronger forwards.

He actually led the Leafs in plus/minus in 1983-84 with a -4 (save for Dave Hutchison - who miraculously put up a +5 in 47 games while skating without knees) while putting up 51 points.  He was part of two disasterous Leaf seasons in 1981-82 as a teenager and again in 1984-85, but was rebounding quite nicely in 1985-86 until he hurt a knee and didn't play after the second week of February.

After just a few games of the following season, still working himself back in after that surgery, he was traded to Vancouver with youngster Dan Hodgson (who I really liked, even if the Leafs didn't) for Rick Lanz, who was basically the same player as Jim was.  Jim, for all his years of experience, was still only 23 years old.

He focused more on defense in Vancouver and was voted their best defenseman in 1987-88. 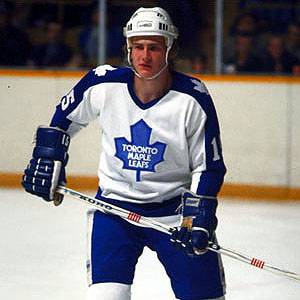 -Traded to Vancouver by Toronto with Dan Hodgson for Rick Lanz, December 2, 1986.

The HHOF take on Jim:

"Defenceman Jim Benning was an excellent playmaker whose success was built on his superior passing skills and range of vision on the ice. He was neither a fast skater nor a physical player, but he managed to utilize his strengths remarkably well in junior and effectively in the NHL.

The native of Edmonton, Alberta was one of the top-scoring blueliners in the history of the WHL. After scoring 71 points in 45 games for the Fort Saskatchewan Traders of the AJHL, Benning joined the Portland Winter Hawks. He averaged a point per game in 1979-80 and then led the league with 111 assists in 1980-81. He was claimed sixth overall by the Toronto Maple Leafs at the Entry Draft and appeared set for a fine NHL career.

It was Benning's misfortune to be selected by Toronto during this period. He was rushed to the NHL in 1981-82 and lost much of his confidence while playing on one of the league's sad sack teams. He showed flashes of potential, registering 24 assists, but would have been better off developing in the minors. Benning spent five years in Toronto and had a career best 51 points in 1983-84.

In December 1986, he and Dan Hodgson were sent to the Vancouver Canucks in a trade for veteran Rick Lanz. Benning took fewer chances on the West Coast, but he became a more complete player. He was a mainstay on the team when it nearly upset the eventual Stanley Cup champion Calgary Flames in the opening round of the 1988-89 post-season. Benning spent one more year in Vancouver before spending the 1990-91 schedule with the Milwaukee Admirals of the IHL. He retired in 1992 after playing 18 games with Varese in the Italian League." 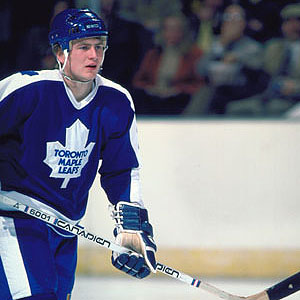