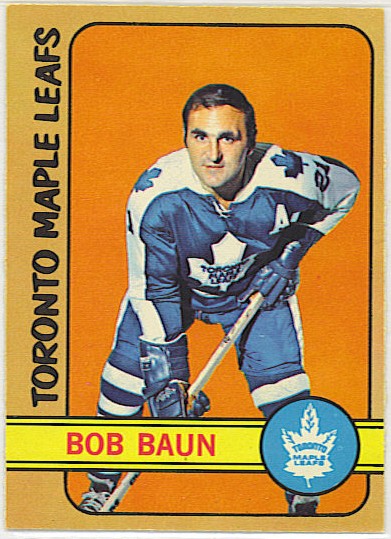 In honour of Ian White's Gordie Howe hat trick last night, and particularly in honour of that fantastic hip check on Eric Cole, I give you Bobby Baun.  It was really a choice between Baun and Marcel Pronovost, who could also really throw the hip, but Boomer was the home-grown player and he actually has a youtube video, which Marcel lacks.  Youtube carries the day.

Bob Baun was a tremendous hitter.  He was another one of those defensemen who was not particularly tall, but was built like a cement block and hit like one, as well.  What has surprised me the most in watching the old footage was his skating ability.  Bob could move when he wanted to and could carry the puck out of the zone with some authority, particularly in the early '60s games I've seen.  He just tended to get rid of it before the offensive zone, I guess, because he never put up a ton of points.

He was a Marlie grad and came to Toronto in the late '50s, part of the cast of characters that would bring the Leafs back out of the weeds and to a championship level.  He was a huge part of the defense that led Toronto to Cups in 1962, 1963 and 1964.

His most famous moment, obviously, was the OT winner he scored in Game 6 of the 1964 Final against Detroit.  Not exactly a bullet, it was a shot that skipped on the way to the net and fooled Terry Sawchuk.  It was particularly notable since he'd been carted off on a stretcher in the second and was playing on a foot that was frozen and taped.  Sometimes mentioned, but not all that often, is that he played all of Game 7 on that foot, as well.  After the series, it was found that the foot was indeed broken and he spent much of the summer in a cast.

Baun's role actually slipped in the next couple of years and by the 1967 Final he was hardly playing at all.  He was lost to the Seals in the expansion draft and then scooped up by Detroit, who were putting together some pretty solid teams built around ex-Leaf talent.

In November 1970, Bob went through four teams in 10 days (though he only played for two of them), eventually coming back to the Leafs (this was actually 39 years ago last Friday - should have had Bobby instead of Igor Korolev)) to be the veteran presence on defense the Leafs hadn't had since Horton went to the Rangers the previous season.

He played pretty well in his return, too.  The defense began to come around and those teams actually began to show some promise.  In '72-73, the Leafs had lost a ton of players to the WHA, and then 5 games into the season, they lost Baun to an injury and that was pretty much all-she wrote.


---
The whole broken foot thing shows up about half-way through:


The HHOF take on Bob:

"With the exception of 1972 Team Canada hero Paul Henderson, there is perhaps no other professional hockey player who has become as well known for his exploits in just a single game as Robert Neil "Bob" Baun.

Baun's career-making night was the sixth game of the 1964 Stanley Cup final, with Baun playing for the Toronto Maple Leafs against Detroit. Baun describes what happened halfway through the third period with the score tied 3-3 at the Detroit Olympia: "I got hit in the foot by a shot by Gordie Howe, so they took me to the Olympia infirmary. The guys who looked at it didn't think I could hurt it any more than I already had, so they froze it and I went back to play the game," recalls Baun, who had to be taken from the ice on a stretcher. "I knew it was broken; I didn't need any X-rays to tell me that. But I didn't want to miss the overtime. I told the trainer he had to do everything possible to get me out there. He gave me a shot of painkiller, which numbed the ankle, and taped it tight. Then I laced up my skate and went back to the bench."

His foot did turn out to be broken - Baun later jokingly called it "the best break I ever had" - but that didn't stop him. And for the Leafs, it was a good thing the stalwart defenseman decided to rejoin the action in game six. Just two minutes into the overtime, Baun made himself a hockey legend. He took a pass from Bob Pulford near the blue line. His shot deflected off the skate of Detroit's Bill Gadsby, past Terry Sawchuk and into the net.

Two nights later, the Leafs won game seven, and with it the Stanley Cup. The irrepressible Baun played a regular shift in the deciding game. The upshot of Baun's painful goal-scoring heroics was that he was never much of a marksman during his 17-year NHL career, recording just 37 goals and 187 assists in 964 career games. From the standpoint of personal stats, his best season was one goal and 20 assists in 1970-71. Instead of wowing the fans with impressive offense, though, Baun was known as a hard-checking pure defender, and he was a mainstay of the "Big Four" of Leafs defenders in the 1960s.

Born in Lanigan, Saskatchewan, in 1936, Baun started off in the junior ranks with the Toronto Marlboros and then was assigned to the American Hockey League's Rochester Americans. He was brought up to the Leafs for the 1956-57 season and joined other young future stars Tim Horton and Carl Brewer on defense. After 11 seasons with the Leafs, in which he played on Stanley Cup winning teams from 1962 to 1964 and in 1967, Baun was picked by the Oakland Seals in the 1967 Expansion Draft. After only one season in California, he asked to be traded back to one of the Original Six teams and the Seals complied, dealing him to Detroit, where he played for three years. Finally, he came back to the Leafs in 1970-71 and played there until 1972-73. But Baun didn't remain out of the game for very long. He went on to coach the Toronto Toros of the WHA in 1975-76.

Baun once fined every member of the Toros $500 after a game against Cleveland when the team botched an 8-2 lead and lost 10-9. He later refunded the money but was replaced as coach in 1976. Baun continued to farm and also had a sideline selling insurance in his retirement." 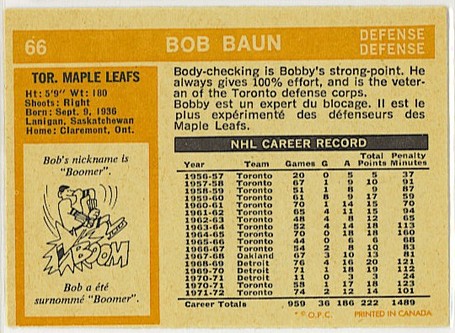