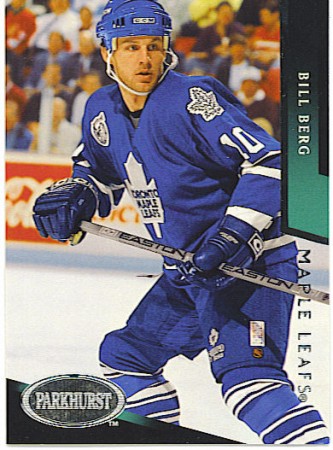 I spent way, way too much time this morning (and even into yesterday night) debating just who should be the LotD for tonight's momentous game against the Islanders.  Friend of the site (meaning the restraining order has lapsed) Alyn McCauley was in the lead for a stretch, Travis Green made a late charge for his series-winner in '02, then I happened on a Bill Berg interview and it all snapped into place.

And, beautiful segue that that is, Bill Berg WAS tough.  Tough to play against, anyway, plus a guy who would take a lot of punishment while driving the opposition to distraction.

Pat Burns made the great quote when Berg was picked up from the Islanders (tie-in!) that he wouldn't know Bill Berg if he ran him over with his car.  We all knew him pretty soon, though.  Bill would make up 1/3 of what might be the best "grind" line I've seen with the Leafs.  Berg, Osborne and Zezel could work you to death along the boards, draw you into a penalty or five, and bring just enough offense to keep themselves on the ice when it mattered.

(Note - Bill shouldn't feel that bad about the cark thing - Burns even got Doug Gilmour's name wrong in his first presser.  He called him "Darryl.")

I'm not sure why Bill was available on waivers in December of 1992.  He'd actually been scoring goals at the best clip of his career to that point.  He'd scored 9 as a rookie and then 5 in 47 games as a sophmore.  Here in '92-93, he'd already potted 6 and seemed to be contributing.  I actually remember people wondering just where all this offense had come from.  The Isles' loss was the Leafs' gain, I guess.  Bill would add another 7 in a Leafs uniform to establish a career high.

The grind line was just as good in '93-94, but before '94-95 (what little there was of it) got underway, Zezel and Osborne would both be gone - Zezel to the Stars as part of the Craig signing, Ozzy to the Rangers as a free agent.  Berg would head to the Rangers himself a year later, bringing Nick Kypreos in return.

Not the biggest name of all, but a big help all the same - Bill Berg. 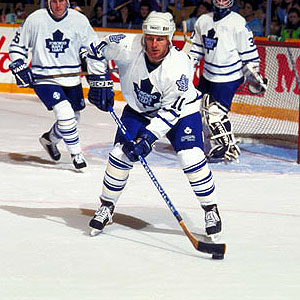 Bill Berg back for a ceremonial faceoff:

The HHOF take on Bill:

"Left-winger Bill Berg was a superior defensive player and agitator during his decade of NHL service. He was a quick skater who was known throughout the league for finishing his checks and getting under the skin of most opponents.

The native of Beamsville, Ontario played junior with the OHL's Toronto Marlboros. He was chosen 59th overall by the New York Islanders at the 1986 Entry Draft and proceeded to spend the bulk of his first three pro years in the AHL. Beginning in 1990-91 he was a useful grinder and checker for New York.

In December 1992, Berg was claimed on waivers by the Toronto Maple Leafs and quickly formed an outstanding checking line with Peter Zezel and Mark Osborne. The tenacious winger's close checking helped the Leafs reach the semi-finals in 1993 and 1994. He also scored the occasional goal and was a fan favourite for his willingness to play the body.

When Toronto began to slide in 1995-96, Berg was traded to the New York Rangers where he was a useful role player through the 1997-98 season. The veteran needler retired in 1999 after helping the Ottawa Senators finish first in the Northeast Division with 103 points. " 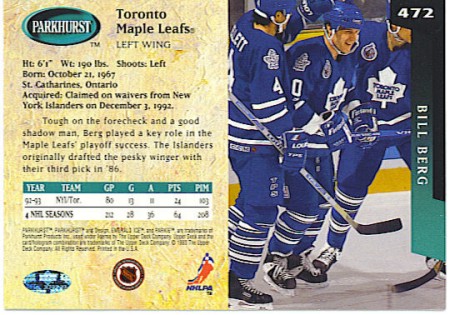