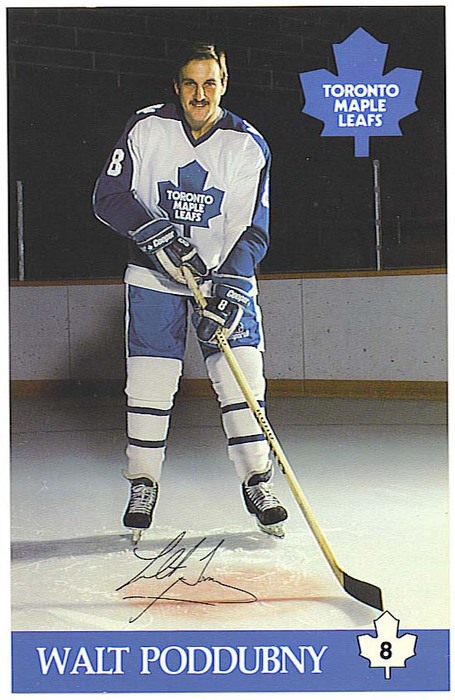 When people reminisced about Walt Poddubny after his death in March, the feeling that was expressed again and again was simply how much everyone seemed to like him.  He was a good guy, a person it was fun to hang with, to have a beer with, someone whose company was really enjoyed by his friends and teammates.  There was a lot of sorrow at his passing and sadness at how things had turned out for him.  He was sort of a cautionary tale about how life can turn on an athlete once the spotlight has moved on to someone else.

For a guy with Walt's size and hands, he didn't score as much as one might have thought in junior.  The Oilers got him with a fifth-rounder in 1980.  By 1981-82, though, he was showing some really good skills in the minors.  The Oilers had enough scoring forwards but were interested in the grit of a Laurie Boschman, so the Leafs and Oilers worked out a deal in March and Walt finished the season in Toronto.

In 1982-83, Walt (and Peter Ihnacak) set a Leaf rookie record by scoring 28 goals and things were really looking up.  Walt had a great wrister and a nose for the net and just seemed to have a knack for scoring.  It looked like the Leafs had found themselves a pretty good player.

The Leafs actually had a number of good young players and the mid-80s seemed to always find them injured.  Frycer, Ihnacak and Poddubny all missed time over the next three seasons.  Walt's problem was a broken ankle he suffered in October, 1983 that limited him to just 38 games.  He'd only get into 32 in 1984-85 and there were some questions about just how hard he worked.

In 1985-86, he got a foot infection in training camp and missed some time again.  He would wind up in the AHL as the Leafs now had the Hound Line, Frycer and Ihnacak were more healthy and there was simply more depth up front.  Still, that team wasn't THAT strong and I wondered all along just where this guy was.  By mid-season, he got the call and ended up going a point per game over the 33 games he got into.

In the playoffs against the heavily-favoured Chicago Black Hawks, Walt came up big with some goals and the Leafs, dead last a season before, swept the Hawks in the first round and took St. Louis to seven games.

In the off-season, Walt was sent to the Rangers for another injury-prone player, Mike Allison.  Walt responded with three straight seasons of at least 38 goals.  Allison scored 7 goals in a season and a quarter and then was sent to LA for Sean McKenna, who was about the least useful forward I remember the Leafs having.

Walt's knees cut his career short.  He coached for a while, particularly in Alaska, but when that ended, he found it tough.  His marriage was broken up, he wasn't working, he'd been drinking some and had moved in with family.  He was to do an interview with Alan Maki of the Globe about the perils of post-hockey life but never got the chance.  He was only 49.  I never did hear the cause of death.

It should have been better. 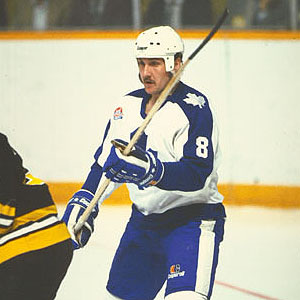 
The HHOF take on Walt:

"Walt Poddubny played his junior hockey for the Brandon Wheat Kings, the Kitchener Rangers, and the Kingston Canadiens from 1978 to 1980. His offensive production was adequate but far from stellar. As such, he was drafted 90th overall in the 1980 Entry Draft by the Edmonton Oilers.

Poddubny reported to the Oilers camp and put in a solid performance. But the club's all-star lineup was too hard to crack, so he was dispatched to the minors in Wichita where he spent most of the next two seasons, biding his unhappy time.

The Leafs picked him up in exchange for Laurie Boschman in 1982. Poddubny's first full season with the Leafs was quite productive. He nailed down 59 points in 72 games. But then once he was established, criticisms began to surface that he was a floater, guilty of inconsistent play. Then the injury bug struck, forcing him to miss many games during the seasons that followed. By 1985-86, Poddubny's knees were wobbly as he was sent to St. Catharines of the AHL to work things out. He balked at the idea and was then traded to the New York Rangers.

The Rangers made the right move. Poddubny was reborn as a goal scorer. He hit the ice and promptly potted a career-high 40 goals and 47 assists in 75 games. His numbers were similar the following year. In 1988-89, Poddubny was traded to the Nordiques where he continued to put up impressive numbers. But after only one season, he was traded to his final NHL stop, the New Jersey Devils.

In Jersey, Poddubny's knees finally succumbed to the duress of NHL play. His games played and offensive numbers fell off dramatically, leading to his retirement in 1991. He sat on the sidelines for two years and then attempted a comeback with the Worcester Ice Cats of the AHL. He lasted only 34 games and then quit for good.

Since leaving the ice, Poddubny has coached in Daytona Beach of the ECHL and in Anchorage, Alaska of the WCHL." 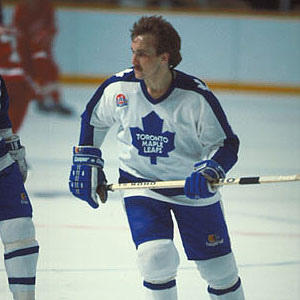