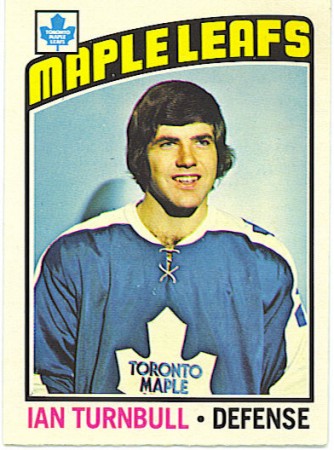 With a single point, Tomas Kaberle will tie Tim Horton as the second-highest point getter amongst Leaf defensemen.  I'm going to save Horton until Tomas actually passes him, so today we'll look at the player in fourth, the one Tomas passed last year - Ian Turnbull.

There has been a lot of talk about the players the Bruins might get out of the Leafs' draft picks.  The best player the Leafs ever got out of a Bruins pick pretty much has to be Turnbull.  Further, for all the times the Leafs got hosed by losing players to the WHA, this was a case where they had the WHA to thank.

Where the Leafs lost Bernie Parent and a cast of thousands in 1972-73, the Bruins hadn't fared a whole lot better.  They had lost Gerry Cheevers (along with Sanderson, Green and McKenzie) and needed help in goal.  At the trade deadline, the Leafs sent them Jacques Plante for their first-rounder in 1973.  Jacques went 7-1 for the Bruins in the last NHL games he ever played.  The Leafs used the pick on Ian Turnbull.

Joining the Leafs at the same time as Borje Salming, Ian brought yet another offensive presence from the back end.  If we compare the Salming/Turnbull pairing to the Kaberle/McCabe pairing of a few years back, Turnbull was more the McCabe figure.  He was a slightly better goal scorer and could also be periodically interesting in his own end.

He could bring the offense, though.  He still holds the Leaf single-season record for goals by a defenseman with 22 in 1976-77 (later tied by Al Iafrate).  He hit for 20 goals in 1975-76 and another 19 in 1980-81.  He scored five times in a Feb. 2, 1977 game against Detroit, an NHL record.  He's second overall in career goals by a Leaf defenseman, and got these totals in only half the games that Salming and Horton played.

Joe Pelletier had this quote from him about his five-goal night:

"It was very memorable. It’s a double-edged sword when you set records. Obviously you’re elated and excited about setting a record but at the same time it’s difficult once you’ve achieved a certain level, you’re expected to do it every night. And that type of performance, you can’t expect it to happen every night. I did score four in Los Angeles when I got traded out here with the Kings. And one of the interesting anecdotes was I was playing with a younger player at the time, Mark Hardy, and I had just come off from scoring the fourth goal and he wanted to know if that was a record. And I said, ‘No, that’s not a record.’ He said, ‘It isn’t? What’s the record?’ And I said, ‘Five.’ And he said, ‘Well who got that?’ And I said, ‘I did.’ Of course he was a younger player. So it was fairly typical that the younger players didn’t really know what the older players did or whatever. It was kind of a funny story."

His best moments in a Leaf uniform probably came in 1978 against the Islanders.  With Salming out of the lineup with an eye injury, it was Turnbull that really stepped up and helped the Leafs win that series.

Turnbull left the Leafs in the great purge of the second Imlach era.  He played a bit for LA and then Pittsburgh, but then decided there was more to life than hockey and moved on.  I've seen a number of post-hockey interviews and he seems like an interesting character with a lot of varied interests.  I don't think he's been bored much since he left the game. 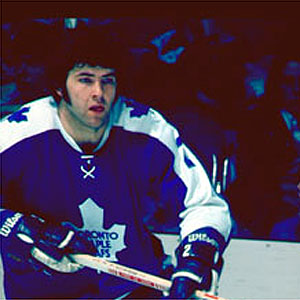 Say what you like about these ceremonies - I think it's pretty cool to fete guys like Turnbull, Baun and Stanowski.  Time will come when you can't.

A recent interview with Ian Turnbull, which would have been a lot better had it not been for an itch he had right in the middle of his chest.


The HHOF take on Ian:

"Throughout his career in hockey, Ian Turnbull was a natural, rushing defenseman and puck-handler who knew what to do in the other guy's end of the rink. He started out in the youth hockey programs of Montreal where he quickly discovered that he was naturally better at the sport than most of the other kids around the neighborhood.

He continued being a superior performer right up the ranks to the junior level where he skated for the Montreal Junior Canadiens and, later, the Ottawa 67's of the OHA from 1969 to 1973. In his final year as an amateur, he skated with Islanders great Denis Potvin as the two prepared to make the jump to the NHL at the same time.

Turnbull was picked up by the Toronto Maple Leafs in the 1973 Amateur Draft. He and the stalwart Borje Salming were teamed together to form one of the more accomplished defensive pairings in the league. All was progressing according to plan until a second-year collision occurred between Turnbull and Blues' enforcer Bob Plager. Turnbull ended up tearing knee ligaments that severely limited his action during the 1974-75 campaign.

After a year of healing, he bounced back, establishing himself as a premiere offensively capable rearguard. In 1977, however, he slipped into a lengthy scoring drought. He waited until a match against the Detroit Red Wings on the night of February 2 to break free from his malaise. He became the first blueliner to score five goals in one game en route to a 9-1 pasting of the Wings. The record still stands today.

Turnbull remained as a Leaf mainstay until 1981-82 before being dealt to the Los Angeles Kings after only 12 games with the Leafs. Upon his arrival with the Kings, Turnbull played most of the season with the parent club before being demoted to the New Haven Knight Hawks of the AHL later in the season. He tried his hand with the Pittsburgh Penguins the following year but found that his interest in hockey had been supplanted by an eagerness to get a career in business underway. As a result, he hung up his blades in 1982." 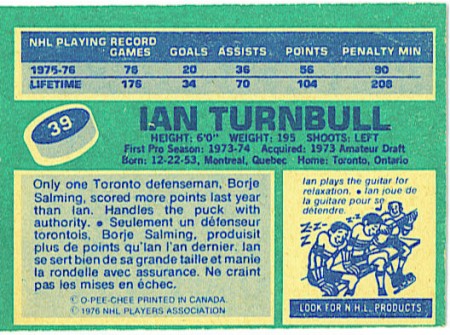