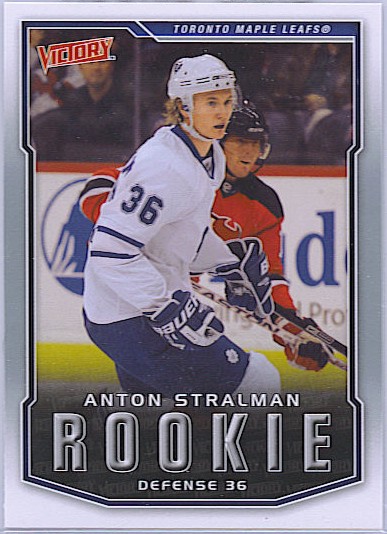 Yesterday, the conversation in the Ian Turnbull thread devolved into a discussion on the merits of keeping Anton Stralman around.  Stralman, in case people haven't noticed, has been putting some points on the board for Columbus, playing 20 minutes per night and seeing some real PP time, something he wasn't doing here and wasn't likely to.

The argument, quite convincingly debunked in my opinion, was that trading Stralman for the pick that allowed the Kessel deal to happen was disasterous because - based on 22 games this season - Stralman was now a 50-point defenseman and we could have sent Kaberle (an 86-point defenseman, by that standard) away for picks and not have had to watch Kessel score a bunch of goals for us.  The fact that he couldn't make Calgary's defense either and was shipped off for a third-rounder is neither here nor there, I guess.

Part of it, I guess, was the whole notion that was floated a year or so before he got here that he was going to be "the next Lidstrom."  It's always nice to hear something like that, particularly when its point of origin isn't a Leaf message board or followed by an (e5).

Part of it was that goal where he danced through the entire Montreal roster and then put a perfect shot past Halak.  That's always worth something.

Last year, I thought he was carrying the puck with more authority and looking a lot more confident out there.  He looked like a guy who could maybe evolve into another Kaberle.

At the same time, he wasn't really grabbing the bull by the horns and forcing his way onto the roster.  He was a guy who was playing 15 minutes per night and while he wasn't looking particularly bad out there, he also wasn't making me wonder why on earth he wasn't out there more.

With the addition of Komisarek and Beauchemin and the evolution of White into the second offensive option on defense, Stralman was in tough to make it on the bottom pairing.  Odds are that he would have been lost on waivers.  Burke took an asset that might have been lost for nothing and used it to acquire a pick that helped him land Phil Kessel.  One may or may not like the Kessel deal, but we still haven't seen Boston draft anyone with those picks.  It's a tad early to be suggesting they'll get another Thornton out of them (did they win anything with the last Thornton they had?).

If Anton Stralman can take advantage of this opportunity and really become a 50-point defenseman, then all power to him.  I liked him as a player, and don't root for him to fail simply because he's no longer a Leaf.  Maybe Calgary will turn that third-rounder into the next Steve Mason, too, who knows?

I just don't see the Stralman deal as the next instance of this, however: 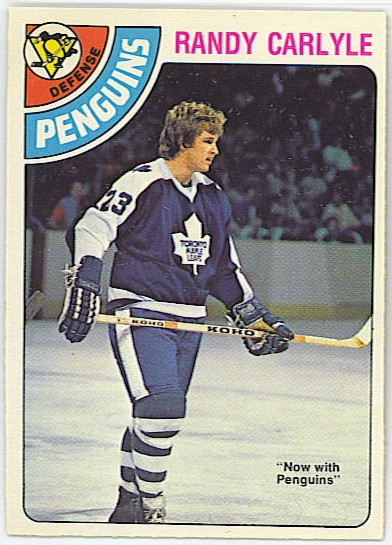 I'd never had a patch card before I got this.  I still think they're junk: 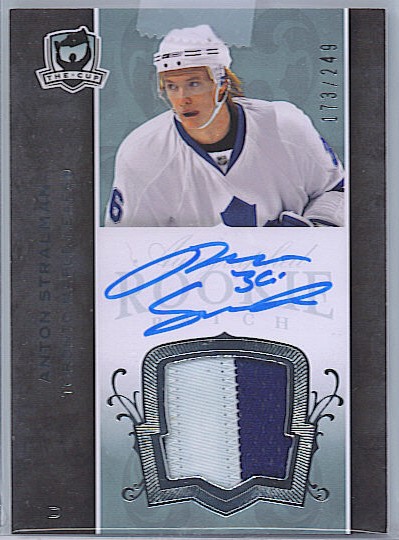 This was a really, really fun goal.  If he'd ever done it again, he'd still be here.


The HHOF take on Anton:

"Anton Stralman was born August 1, 1986 in Tibro, Sweden. The seventh round, 216th overall selection of the Toronto Maple Leafs in the 2005 NHL Entry Draft, Stralman honed his skills in the Swedish Elite League with Timra IK.

A smooth-skating defenseman, Stralman crossed the pond in the summer of 2007 to join the Leafs' AHL affiliate. However, after injuries bruised the club's line-up, Stralman was called up to the blue and white to appear in his first NHL game on October 23, 2007. He went on to split his 2007-08 season between the Maple Leafs and their AHL affiliate that season, and looked especially comfortable in a game against the Canadiens in which he tallied two goals. 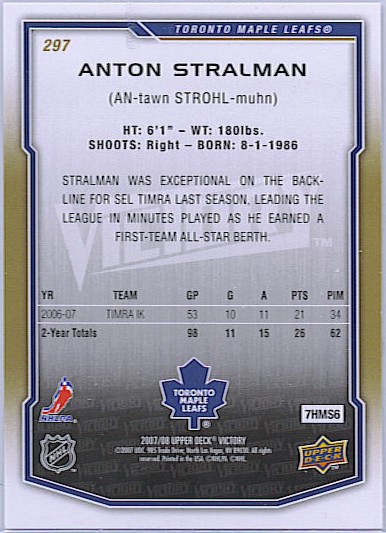