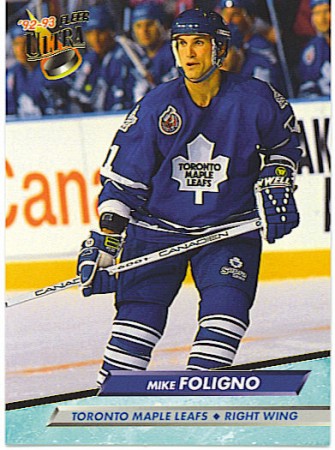 One of the things I like to do with a game-night LotD, if there's no pressing news story or historical tie-in I can make, is find someone who played for both the Leafs and the opponent.  For the most part, I want someone whose Leaf time was better than his time with the other team (because it's just bad karma otherwise), and given the finite number of people for whom this is true (for example, using Brian Bradley for a Tampa game is probably a bad idea), it's often kind of tricky.

By the time Mike Foligno got to Toronto, he was on the downside of his career.  He wasn't the same guy that scored 40 goals in Buffalo.  His role was more to bring energy and effort and to chip in the odd goal when he could.  A Leaf fan growing up, Mike brought a ton of enthusiasm to every shift.

The most memorable thing about Mike Foligno was the way he would leap in the air every time he scored.  This isn't just something he did as he got older and cherished each goal a little more.  Mike scored 355 regular season goals and another 15 in the playoffs, and as far as I know, he did this for all of them.  Ovechkin gets ripped for being overenthused after he scores, but compared to Foligno, you need to check Ovie for a pulse.

Mike also had this helmet.  DGB hated it, with good reason.  It wasn't as bad as Butch Goring's helmet, which came out of a cereal box when he was six years old (actually, it might have been the cereal box), but it was close.  DGB describes it this way:

Three things you need to know about Mike Foligno's helmet.

* He made it himself out of an old salad bowl.
* It had a white stripe around it for absolutely no reason.
* For his entire Leafs career, it was always a slightly different shade of blue than everyone else's

And yes, I listed those in increasing order of how much they annoyed me. And still do.

Can't really argue with that.

OK - the one part DGB doesn't talk about (though I actually do in the comments) is Foligno's post-game interview.  Mike hadn't dressed for a couple of games, and when asked about it, his response was that, well, Pat had told him they'd need him to come in and be a hero, so they'd made sure he was really well-rested.  It was funnier at the time.

The '93 playoffs was his last hurrah with the Leafs.  He was sold to Florida the following November for a seemingly undocumented amount of cash.  No record of what they did with it.  We'll assume they spent it wisely.

He was later one of Mike Murphy's assistant coaches.  Too bad he missed the fun of the Quinn years.

Not going to talk about the broken leg.  It was grody.

One last thought - did anyone else realize Mike was a #3 pick overall?  I didn't. 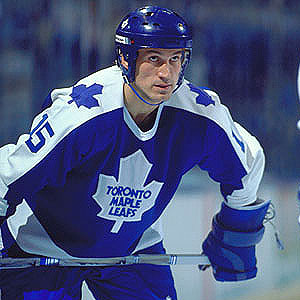 Number 15?  What's up with that? - via www.legendsofhockey.net
DGB has every clip in the world, but I can never hear the audio.  If you can't either, make up something exciting....


The HHOF take on Mike:

"Mike Foligno was a hard-nosed right-winger with a heavy shot and an above average scoring touch. He played 1,018 regular season games for four different teams and was considered a positive influence on team chemistry wherever he played.

The native of Sudbury, Ontario excelled for the home town Wolves of the OHA where he served as team captain. In 1978-79 he led the league with 150 points and was named to the OHA first all-star team. That summer he was chosen third overall by the Detroit Red Wings in the newly-named NHL Entry Draft.

The enthusiastic youngster scored 36 goals in 1979-80 and finished runner-up to Ray Bourque in the Calder trophy voting. His played slipped a bit in 1980-81 but he still managed 28 goals then suited up for Canada at the World Championships. Two months into the next season he and teammates Dale McCourt and Brent Peterson were sent to the Buffalo Sabres for Danny Gare, Jim Schoenfeld, and Derek Smith.

Foligno spent the prime of his career with the Sabres where he added a strong defensive game to his offensive prowess under coach Scotty Bowman. During his decade of service in Western New York, he scored at least 20 goals eight times, including a personal-best 41 in 1985-86. The only thing missing during this period was post-season success as the best the Sabres could do was come within an overtime goal of the semi-finals in 1983. During this time Foligno also played for Canada at the World Championships where he won a bronze medal in 1986 and finished fourth the next year.

By the 1988-89 season the Sabres used Foligno in a more grinding defensive role. The emergence of young players like Pierre Turgeon and the acquisition of veteran Rick Vaive reduced Foligno's offensive role and power play time. Halfway through the 1990-91 season he was traded to the Toronto Maple Leafs. He injured his knee in his first game with the Blue and White but returned to suit up in 37 games that year.

In 1991-92 Foligno formed a useful "lunch bucket" line with Craig Berube and Mike Krushelnyski until suffering a badly broken leg just before Christmas. He worked diligently during his rehabilitation and was given some slack by new Toronto coach Pat Burns at training camp in 1992. His zest for life and the game put him in good stead with his employers and peers. Foligno scored 13 goals and played a solid checking role on the disciplined Maple Leafs. He was also an inspirational leader and scored a key overtime goal during game five of the first round playoff victory over the Detroit Red Wings. Foligno helped the Leafs come within one game of reaching the Stanley Cup finals before they succumbed to Wayne Gretzky and the Los Angeles Kings.

Foligno started the 1993-94 season in Toronto but dressed for only four games. He was traded to the Florida Panthers a month into the season and played 39 games for the expansion club before retiring at the end of the year. He immediately declared that his first year away from the game would be spent entirely with his family. In 1995-96 he was hired by the Maple Leafs as an assistant to St. John's coach Tom Watt. Before the end of the season he found himself back at the Gardens as an assistant to Nick Beverley after the firing of Pat Burns.

In 1997-98, Foligno was hird by the Colorado Avalanche as an assistant before becoming the head coach of the team's AHL affiliate in Hershey for the next five years. Following his stay in Hershey, Foligno returned to his roots and became head coach of Sudbury Wolves in the summer of 2003." 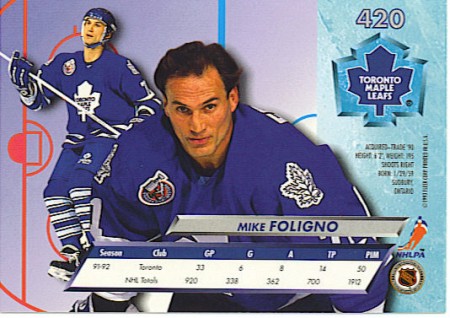