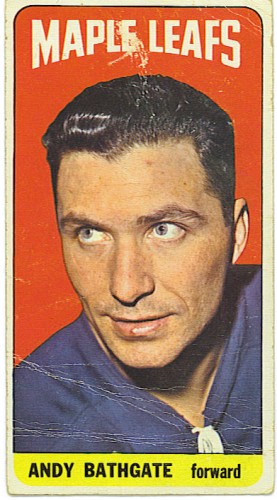 I do have one of these that isn't creased but never got around to scanning it.  Alas.

As has been pretty widely reported, last Sunday was the 50th anniversary of the Habs/Rangers game in which future-Leaf Andy Bathgate cranked a shot off future-Leaf Jacques Plante's face giving Plante the opportunity to use his mask in a game situation.  The Habs won so he was allowed to keep it.

Until checking out the youtubes this morning, I had never heard that Bathgate's shot wasn't particularly accidental.  When Plante was out playing the puck, if an opposition forward was charging in looking for contact, he'd bend over at the last second and send the forward cartwheeling face-first into the boards.  I saw him do this to Frank Mahovlich in a 1960 game and it's amazing his career didn't end on the spot.  Apparently, he did this to Andy Bathgate in 1959 and Andy was letting Plante know that he remembered.  (Note - if Plante was still doing this a year later, he wasn't terribly concerned by Bathgate's revenge.)

With Kessel making his first appearance tonight, it's kind of interesting to have Andy as the LotD today.  Bathgate was also acquired in a highly-criticized, very expensive trade.  In late 1963-64, fan favourites Dick Duff and Bob Nevin went to New York along with kids Arnie Brown, Rod Seiling and Bill Collins for Bathgate and Don McKenney.  The Leafs went on to win the 1964 Stanley Cup, with Bathgate scoring the Cup-winning goal.

The deal was often criticized for the youth that the Leafs gave up.  Brown and Seiling were Ranger mainstays on defense for a number of years and both Nevin and Duff would re-find their scoring touch (though Duff had to go to the Habs to do it).  The defencemen would have been particularly valuable to the Leafs in the later 1960s as the old guard retired.  Duff played until 1971-72 and Nevin several years after that, while both Bathgate and McKenney were Red Wings by 1965-66.

In 1967, Cox suggests that the Leafs could have won the 1964 Cup anyway.  That's a pretty tough claim, though.  They might have, they might not.  The fact is that after the trade, the Leafs did win that Cup.  Both Bathgate and McKenney were red-hot in the last few weeks of that season and both were strong in the playoffs.

The bad part of the trade was that both players were gone so soon.  Like everything else, injuries were part of it.  McKenney hurt a shoulder in Game 5 of the Final and never really seemed right again.  Bathgate had hand and leg issues in 1965 and his production slowed.  An outspoken player, Bathgate's criticisms of Imlach also played a role in his departure.  He would leave Toronto in the deal that brought Marcel Pronovost.

If you watch the tribute video below, Andy also was outspoken about the rise of spearing in the game.  He wrote an article about it and named names.  He got in trouble for it, but at the same time, a penalty was introduced and the play was made illegal.  This is also of interest given the talk today about players speaking out about head shots.

Andy Bathgate also scored the first goal in the history of the Pittsburgh Penguins.  he now runs a golf centre at Eglinton and the 403.
-----

- Traded to NY Rangers by Cleveland (AHL) with Vic Howe for Glen Sonmor and Eric Pogue, November 15, 1954.
- Traded to Toronto by NY Rangers with Don McKenney for Dick Duff, Bob Nevin, Rod Seiling, Arnie Brown and Bill Collins, February 22, 1964.
- Traded to Detroit by Toronto with Billy Harris and Gary Jarrett for Marcel Pronovost, Eddie Joyal, Larry Jeffrey, Lowell McDonald and Aut Erickson, May 20, 1965.
- Claimed by Pittsburgh from Detroit in Expansion Draft, June 6, 1967.
- Loaned to Vancouver (WHL) by Pittsburgh for the 1968-69 season for future considerations, October, 1968.
- Loaned to Vancouver (WHL) by Pittsburgh for the 1969-70 season with the trade of Paul Andrea and John Arbour for Bryan Hextall Jr., May 20, 1969.
- Selected by Miami-Philadelphia (WHA) in 1972 WHA General Player Draft, February 12, 1972.
- Transferred to Vancouver (WHA) after Philadelphia (WHA) franchise relocated, May, 1973.

The HHOF take on Andy:

"Andy Bathgate was a hockey stylist--an athletic, graceful skater who handled the puck with skill and flash. Known for his blazing, accurate shot, he was one of the first men to use the slapshot to overpower goaltenders. Bathgate was a creative playmaker on the ice and often did the unexpected, throwing off opposing defenders with imaginative feints and passes. He accomplished all of this wearing heavy knee braces, the result of a serious injury during his first shift as a junior player in Guelph, Ontario. That injury required a steel plate to be inserted in his left knee to repair the damage.

Unfortunately, the New York team that Bathgate spent the best years of his career with had one of its worst runs, and his great play was often forgotten once the playoffs began, usually without his Rangers.

Born in Winnipeg in 1932, Bathgate spent the beginning and end of his career shuttling between the pro leagues and the minors. He played on the Memorial Cup-winning team in Guelph in 1952 and then first cracked the Rangers during the 1952-53 season. He finally made it as a regular in 1954-55 and had an immediate impact, scoring 20 goals and collecting 20 assists. For the next eight years, he led the Rangers in points and established himself as one of the most gifted offensive players in the league. He had arguably his best year in 1958-59, leading the NHL in assists and performing well enough to win the Hart Trophy as the league's most valuable player even though the Rangers finished a point behind the fourth-place Toronto Maple Leafs and missed the playoffs. Bathgate was also voted to the league's First All-Star Team that year, beating out the great Gordie Howe for right wing honours.

Like Howe, Bathgate could play the physical game and was known as a fierce fighter when the occasion warranted it, perhaps an attribute from his youth in a tough Winnipeg neighborhood known for its boxers. Bathgate made the First All-Star Team again in 1962-63 and was voted to the Second Team the next year. Though truly an individualist on the ice and off, he always placed the team above his own accomplishments and was disappointed with the Rangers' consistently poor performances. In February 1964 he was traded to the Toronto Maple Leafs, a team preparing itself for a run at the Stanley Cup. Bathgate would realize his greatest thrill in hockey when the Leafs, helped by his timely goals in the playoffs, won the championship that year.

Bathgate, who missed a number of games in the 1964-65 season with his continuing knee problems, was sent to the Detroit Red Wings. He helped the Wings during their surprising run to the Stanley Cup finals in 1965-66. In 1967 he was picked by the Pittsburgh Penguins in the Expansion Draft. He spent a year with the Penguins and then two with the Western Hockey League's Vancouver team, earning the MVP award in that league in 1969-70. Bathgate was a rare veteran in that he didn't mind playing in the minors late in his career. He said he'd rather play a regular shift in a lesser league than sit on the bench in the NHL. He did return to the NHL for one last season, again with the Penguins, and then ended his career as a player-coach in division A in Switzerland. He made one last late comeback, playing 11 games with the World Hockey Association's Vancouver Blazers, a team he'd coached the previous season, in 1974-75.

Andy Bathgate is closely associated with one important hockey innovation. The first originated on November 1, 1959. Bathgate sent one of his harder shots toward goalie Jacques Plante of the Montreal Canadiens. The puck struck the All-Star goalie in the face, and opened a gash that required stitches. When Plante returned to the ice, he was wearing a mask, a piece of equipment now universally used.

A smooth player and class act, Andy Bathgate was elected to the Hall of Fame in 1978 along with Marcel Provonost, the player he was traded for when he went to Detroit from Toronto, and, ironically, Jacques Plante." 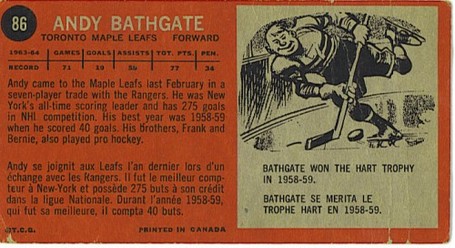