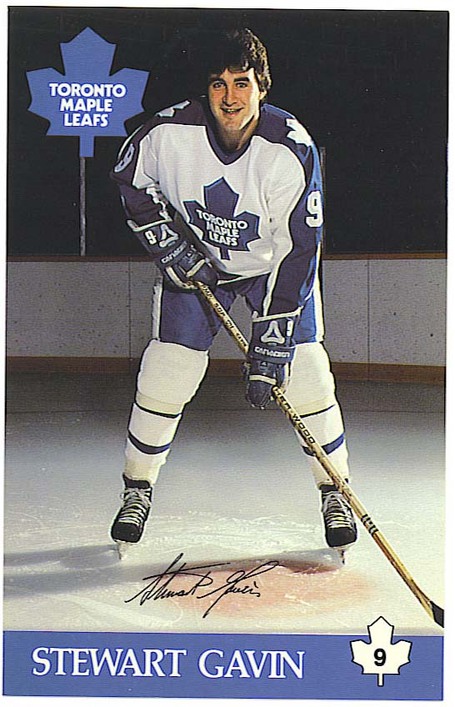 (Yes, there actually was a time when the name "Stewie" evoked something other than an evil-minded baby with a football-shaped head, at least for Leaf fans.)

Back when Wendesday Leaf games were on CHCH in Hamilton, a young Jim Hughson was doing the call.  For whatever reason, one of the names I can always hear him saying (no, I'm not hearing voices, I have to specifically think about it) is that of Stewie Gavin.

It's kind of odd to look at #9 from the '80s Leafs and not have it be Russ Courtnall, but once Dan Maloney retired, this number went to Stewie.  (Note: Stew had been wearing the soon-to-be-really-famous number 17.)

Stew was a really different player than Maloney had been.  A fourth-round pick of the Leafs in 1980, he was a guy with tremendous speed who could check and kill penalties but never showed a whole lot by way of hands.  (Actually, he'd fit in on this current team relatively well.)

At least, he never showed a whole lot of hands until he left town (this was also kind of a common theme).  1984-85 was Gavin's last season in Toronto.  He scored 25 points 12 goals and 23 assists.  On the eve of the 1985-86 season, he was sent to Hartford for Chris Kotsopoulos.  Russ Courtnall took over his number 9 and things began to take on more of the late-80s shape.

In Hartford, Stew almost matched his output of the previous two seasons combined.  An ankle injury in his third season in Hartford slowed him up and he was a waiver wire pickup by the Minnesota North Stars, where he resumed his checking role until a knee injury felled him in 1992-93.

In a move that not too many people remember, Stew was actually signed by the Leafs in 1994-95.  He was trying to come back from that knee, but couldn't bring his game back to the NHL level.

Good guy overall, and not a bad career for a player out of the fourth round.

(Note: Someday, if I find a working beta machine and can locate the tape, I have Jim Hughson calling all 11 Leaf goals from the Jan 8, 1986 win over Edmonton.  It's a keeper.) 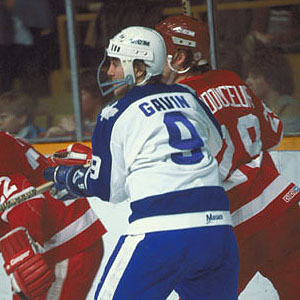 
- Traded to Hartford by Toronto for Chris Kotsopoulos, October 7, 1985.
- Claimed by Minnesota from Hartford in Waiver Draft, October 3, 1988.

The HHOF take on Stewie:

"Stew Gavin came up through the amateur ranks with the Toronto Marlboros of the OHA from 1977 to 1980. While there, he established himself as a quick-skating plumber who could flesh out any respectable roster with his intensely determined style of play. In 1980, he was picked up by the Toronto Maple Leafs who, after a brief tryout, dispatched him to the New Brunswick Hawks of the AHL to refine his game.

Over the next two campaigns, Gavin picked up an increasing number of games with the Leafs. But it wasn't until 1983-84 that he became an NHL regular. At that time, he became the Blue and White's designated checker and penalty killer. But the team was stuck on a losing track year in and year out. In 1985, the team sought to bolster its defensive corps by surrendering Gavin to the Hartford Whalers in exchange for blueliner Chris Kotsopoulos.

As a Whalers, Gavin attained his best overall results. He continued to excel at his defensive game while lifting his offensive numbers to a personal best 55 points in 76 contests during his first season with the club. But in 1988, he was claimed on waivers by the Minnesota North Stars. There he continued to perform as a defensive forward until he blew out his knee in 1993. On the advice of his doctors, he retired for a season to work as a scout, but discovered that his knee was responding better than anticipated.

In 1994-95, he staged a comeback with the Toronto Maple Leafs that led him only as high as a minor-league stint with Kansas City and Minnesota before he packed it in for good in 1996." 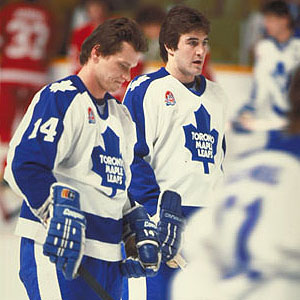