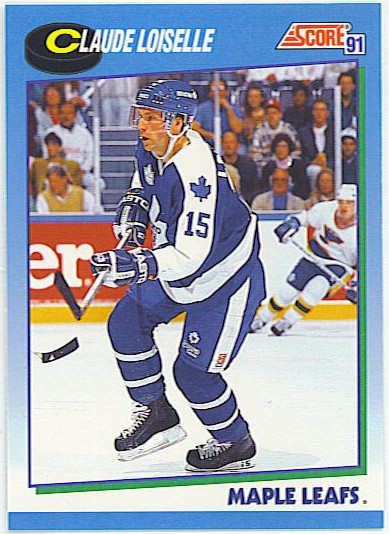 Much like Denis Dupere (though without the killer moustache), Claude Loiselle was a checker and penalty-killer fated to spend most of his career playing for lousy teams.

Claude is actually a name I forgot to mention when I did the write-up on the miserable season that was 1990-91.  He was yet another instance of the Leafs taking every available veteran off the Quebec Nordiques.  I'd always associated him with the DeBlois/Broten deal, but he was actually a waiver wire pickup in March.

Claude was a checker with an edge.  Though not a heavyweight, he could and would get into it with pretty much anyone.  He broke the 200 penalty-minute barrier once and was generally well over 100 if he played a full season.

My main memories of him are actually from Detroit.  Even though he didn't play a whole lot, he got into it more than once in those mid-80s Leafs/Wings battles.  I still miss the Norris.  Gaining the Habs and Sens was not worth giving up the Wings and Hawks.

Claude was around long enough to see the beginning of the Gilmour era in Toronto, but didn't really get to enjoy it as he and Daniel Marois were sent to Long Island in March 1992 for Ken Baumgartner and Dave (four teams in one season and five consonants to start his last name) McLlwain.

Reading the blurb about his acquisition on the card back below, I can't say I recall any of that happening, though I was probably focused on other things at that point.  His acquisition was on the same day that Allan Bester was dealt.  I guess I only had room for so much information. 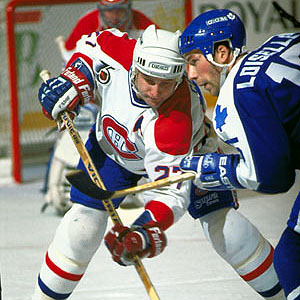 Not a Leaf clip, but Claude whacks Bobby Clarke upside the head and 80s hockey ensues:

The HHOF take on Claude:

"Centre Claude Loiselle was an explosive scorer in junior who played solid defence in order to be a factor in the NHL. The hard-working forward could contribute on offense and work the power play but he also used his speed and hockey sense to kill penalties and shut down the top players on the opposition.

Loiselle played Junior B with the Gloucester Rangers before joining the OHL's Windsor Spitfires. He was chosen 23rd overall by the Detroit Red Wings in 1981 while he was in the midst of accumulating 291 career points with the Spits. Loiselle spent his first four years as a pro working on his game in Detroit as well as with the AHL's Adirondack Red Wings.

The young forward was granted an opportunity to play full time in the NHL after he was traded to the New Jersey Devils for Tim Higgins. Loiselle was a versatile two-way forward for three years in Jersey before he was acquired by the Quebec Nordiques. He killed penalties and forechecked effectively for the Nords before he was picked up on waivers by the Toronto Maple Leafs in March 1991.

Loiselle played a solid defensive role on Toronto in 1991-92 but was traded to the New York Islanders late in the season. He was a decent checker on his new club before retiring after playing 17 games in 1993-94." 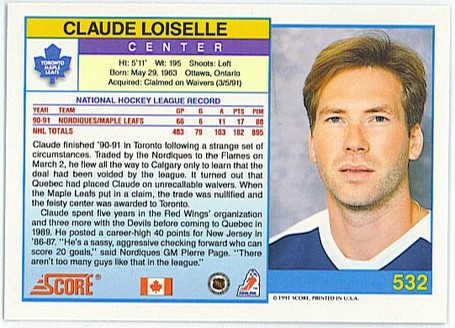