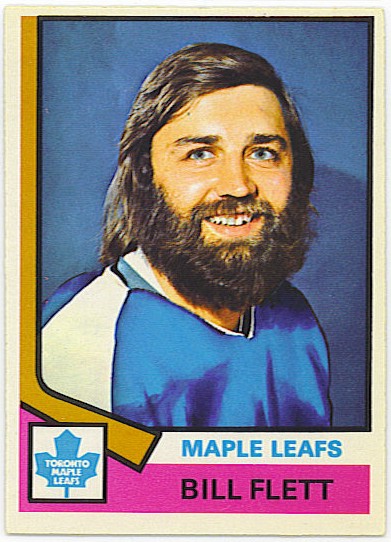 So much for the best-laid plans.

I was supposed to be away today.  As it turns out, I'm not, so I got about 4/5 of the way through today's '84-85 Leaf before discovering I hadn't bothered emailing the scan to myself.  So now I'm here and have put no real thought into who should be the LotD today.

When in doubt, go for the facial hair.  It is Movember, after all.

And nobody ever did facial hair better than Bill Flett.

As a kid, one of my favourite players was Willi Plett.  Having Willi Plett and Billy Flett as Atlanta teammates must have been fun for the announcers.  I wonder whether they were linemates....

Bill Flett was originally Leaf property, but was lost to LA in the 1967 expansion draft.  He scored a team-leading 26 goals as a rookie in 1967-68 but tapered off from there, scoring slightly less each succeeding season until he suddenly found himself a Philadelpia Flyer in 1972.  In Philly, he teamed with Bobby Clarke and hit for a career high 43 goals in 1972-73.

Not long after the '74 Cup win, Flett came back to the Leafs.  He put up 40 points in more of a support role and was gone after just the one season.

The only Leaf story of him that I know at all comes from the Tiger Williams biography and may be coloured by the fact that Tiger was clearly none to fond of him.

In 1974-75, Tiger was just a rookie, and Flett was the hard-partying vet that Tiger felt was living off one big season.  Flett had managed to hurt himself doing something he shouldn't have, and wasn't fit to play.  In practice, he tangled with Tiger, then fell down in pain.  Now, the injury was Tiger's fault and Bill was off the hook.

Can't really validate that story, but that's how Tiger tells it.  I have no reason to really question it, but don't like having the only story I've got being a negative one.

After the Leafs, it was off to the Flames (Willi Plett/Billy Flett!  Good thing Willi was clean-shaven.) and then the WHA with the Oilers.

Flett was nicknamed "Cowboy" for time spent in rodeos in the off-season. 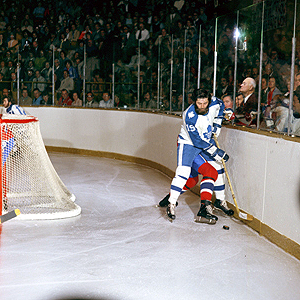 The beard in action - via www.legendsofhockey.net
Joe Pelletier on Bill Flett - maybe I should just link to Joe in the first place and save myself the trouble of writing these things:

- Claimed by Los Angeles from Toronto in Expansion Draft, June 6, 1967.
- Traded to Philadelphia by Los Angeles with Eddie Joyal, Jean Potvin and Ross Lonsberry for Bill Lesuk, Jim Johnson and Serge Bernier, January 28, 1972.
- Traded to Toronto by Philadelphia for Dave Fortier and Randy Osburn, May 27, 1974.
- Claimed on waivers by Atlanta from Toronto, May 20, 1975.
- Traded to Edmonton (WHA) by Atlanta for cash, December, 1976.
- Rights retained by Edmonton prior to Expansion Draft, June 9, 1979.


The HHOF take on Bill:

"Bill Flett began playing hockey at the age of five on outdoor rinks made by his father C.M., himself a former professional hockey player in Los Angeles and Spokane in the old Western League and also with Baltimore of the Eastern League. While growing up in Alberta, Bill started riding in rodeos and he was soon tagged with the nickname "Cowboy." "All the guys played football, hockey, and baseball together during the school year and rode in rodeos together in the summer." Flett said. He also was certain that had he not made it as a hockey player, he most certainly would have been a full-time rodeo rancher.

In 1962, Flett joined the Melville Millionaires of the Western Canadian Junior League at the age of 19 where he scored 35 goals and 85 points in his rookie season. The 85 points was good enough for second in team scoring and he was named to the league's All-Star team.

In 1963-64 season, Flett joined the Charlotte Checkers in the EHL where he had 47 points in just 41 games. In 1964-65, Flett joined the Victoria Maple Leafs, where he was signed to a pro contract by coach Rudy Pilous. However, Flett saw limited ice time and was sent to the Tulsa Ice Oilers where General Manager Ray Miron was convinced Flett could become a key contributor. The Oilers finished the season in fourth place and had to face the first place team and defending Adams Cup Champion Omaha Knights in the semi-finals. The Oilers upset the Knights in six games but lost the Adams Cup finals. Flett played three years in the minors before getting his shot at the NHL.

In June of 1967, Flett was selected from the Toronto Maple Leafs by the Los Angeles Kings in the NHL expansion draft. During his rookie NHL season at the age of 24, Flett scored 26 goals and 46 points for the Kings. He spent the next five years of his career in Los Angeles, when in January of 1972, Flett was part of an eight player trade to the Philadelphia Flyers. Flett's second season in Philadelphia was his best season ever as a pro. He appeared in 69 games, scoring 43 goals and 31 assists for 74 points. This placed him fourth in team scoring behind Bobby Clarke, Rick MacLeish, and Gary Dornhoefer.

The 1974 playoffs was the highlight of Flett's pro hockey career, when the Flyers defeated the heavily favoured Boston Bruins to win the Stanley Cup championship. Flett was especially strong in a Game Two victory, where he assisted on two Bobby Clarke's goals, including the game winner. It also marked the first time in almost seven years that the Flyers were able beat Bobby Orr and the Bruins in the Boston Garden. The Flyers took the series four-games-to-two, becoming the first expansion team to win Lord Stanley's Cup.

During the off-season Flett was traded to the Toronto Maple Leafs where he played one year before being sold to the Atlanta Flames in May, 1975. He was then sent to the Edmonton Oilers of the WHA in December, 1976. Flett played two and a half years with the Oilers in the WHA and joined them as they were absorbed into the NHL for the 1979-80 season, with the collapse of the WHA. However, after just 20 games back in the NHL, it was evident to Flett that the Oilers were in the midst of a huge youth movement with the likes of Gretzky, Messier, Coffey, Anderson and Kurri all on the horizon to lead the team for the next decade. Flett retired but was immediately given a job scouting with the team.

In 1993, Flett had an ulcer which turned out to be life threatening. In May, 1999, he was re-admitted to the hospital for what he thought was severe heartburn but it turned out to be a severe gall bladder attack. After two operations, doctors managed to stabilize his problem, but what was not immediately recognized was that a liver problem erupted. Soon thereafter Flett received a liver transplant, but complications from the transplant claimed his life on July 12, 1999 at the age of 55.

Flett is survived by his wife Doreen and three sons, Cody, Dean and Shane." 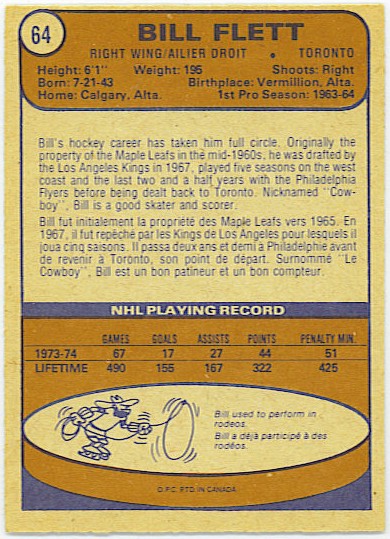